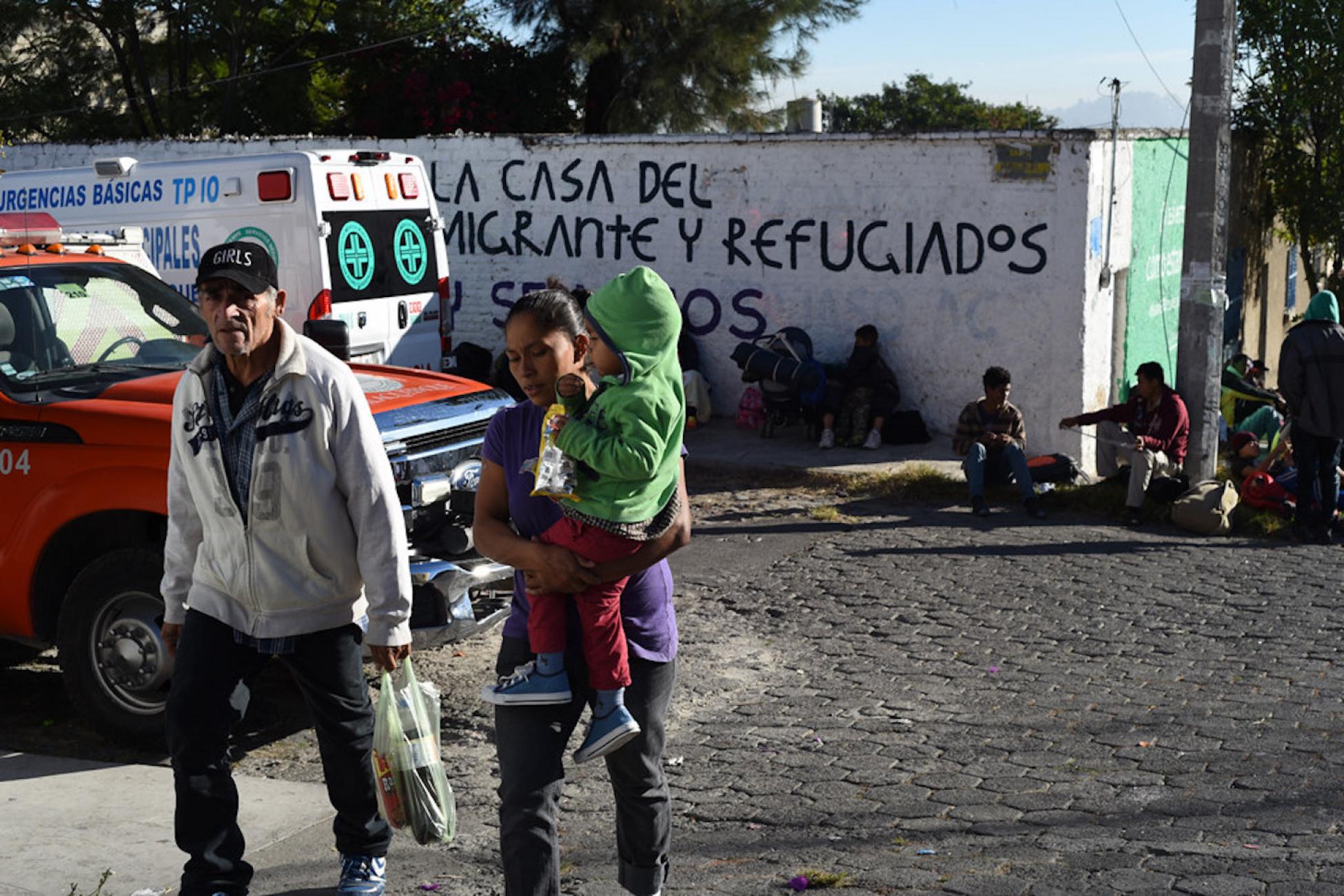 The garbage bags of donated clothing arrive nearly every day. Each one is taken to the foldout tables where their contents are sorted. The item most in-demand are shoes. Athletic shoes.

I’m volunteering at FM4 Paso Libre, the largest migrant shelter in Guadalajara and one of the largest in Mexico. The shoes are a hot ticket item, because their recipients have completed a long journey, often by foot. Each day, dozens of Central American migrants arrive at this warehouse-sized facility, midway through their journey along the largest migration corridor in the world.

Each year, almost half a million migrants make the journey from the Northern Triangle of Central America (which includes the countries of Honduras, Guatemala and El Salvador) northward to the United States. This staggering number speaks to the desperation these migrants face in their home countries, which are amongst the poorest and most violent in the Western hemisphere.

Driven by climate change, crop failure, and gang-related violence, Central American migrants head northward seeking out a better life. But even once they arrive in Mexico, they cannot rest easy. Migrants are routinely victimized in their travel through Mexico. They are preyed upon by private security and the Mexican military for bribes, or in some cases for ransom. For female migrants, sexual assault is a constant threat. They also must evade Mexican immigration police, which in 2015 and 2016 deported more Central Americans than the United States.

In their perilous journey across Mexico, Central American migrants use the shelters as stepping stones of safety. Yet, there are no state-run shelters, leaving everyday people as first responders.

“When they say ‘the drama of migration,’ it really is a drama,” says Fatima Mazú Sifuentes, a shelter director for Hermanos en El Camino, which operates two migrant shelters, one in Ciudad Ixtepec, Oaxaca and the other in Mexico City.

In their perilous journey across Mexico, migrants use the shelters that run the country’s length as stepping stones of safety. In fact, many migrants plan their routes based on shelter locations.

Yet, there are no state-run shelters operating in Mexico, leaving local church leaders and everyday people as first responders.

“If we didn’t exist, there wouldn’t be a place to offer these kinds of services,” says Gabriela Hernandez Chalte, director of Casa Tochan, a migrant shelter in Mexico City.

Varying in size, Mexico’s roughly 80 shelters, at minimum, offer food and shelter. At the most robust, migrants can shower, make free phone calls, use the Internet, get a new change of clothes, access medical attention and mental health counselling, or request pro-bono legal assistance. As part of their intake process, shelter staff can also assess whether a given individual is a minor, has been a victim of a crime in Mexico, or meets other criteria to be eligible for a long-term visa to stay in the country.

“The truth—you feel supported,” says Alex, a Honduran migrant currently staying at Casa Tochan, a shelter in Mexico City. “You are coming with nothing and upon arriving at a house, they give us this support. It feels wonderful because one is tired and there is a place where you can rest with peace of mind.”

However, the work they complete couldn’t be done without volunteers.

“I could tell you that the things volunteers do are very simple, but in reality they give life to the shelter,” says Mazú Sifuentes. She adds that when not enough volunteers are on hand, agency staff are drawn away from their other work.

Volunteers also play an important role in the overall raising of awareness of migrants’ humanity.

“Volunteers’ contact with migrants is the most important thing because once someone is sensitized to migrants’ situations they can’t stop talking about, becoming worried, and doing more,” says Angélica González, manager of the Centre for Attention to Migrants and Refugees at FM4 Paso Libre.

Hearing stories from migrants can be an incredible learning experience.

“They are a reflection of the strength that people have,” says Mazú Sifuentes. “They continue their path in spite of the difficulties. Despite all the obstacles and suffering they’ve endured, they’re strong. They have faith. So you also carry this lesson in strength.”

Not to mention, a lesson in appreciating all that one has, down to a strong pair of shoes.

How to volunteer at a migrant shelter in Mexico

Though they have varying levels of online presence, most Mexican migrant shelters with a volunteer program can be found online by searching “voluntariado” and “casa de migrante” or “albergue para migrantes.”

Shelters affiliated with REDODEM (a network of 23 shelters) are among the most visible given their web presence and formalized volunteer programs.

Fluency in Spanish is a must, as is a minimum commitment of at least three weeks. In exchange for full-time volunteering, some shelters offer free room and board.

Full-time volunteers are given free access to the same medical and other services the shelters provide. At some agencies, like FM4 Paso Libre, volunteers are invited to participate in monthly trainings on topics like human rights, migration, and emerging crises.

You can expect to assist with daily operation duties including dispensing clothing, preparing meals, cleaning, and facilitating phone calls or computer usage. Longer-term volunteers are also often given organizational responsibilities like conducting migrants’ entrance interviews to see if they qualify for refugee status or another type of visa.

Mazú Sifuentes encourages volunteers to propose things they can offer. She cites the yoga classes, poetry workshops, and guitar lessons, all provided by foreign volunteers. In fact, the majority of her agency’s volunteers have been foreigners.

“Work with migrants implies a risk,” says Mazú Sifuentes. “In the background are many other actors: organized crime or the issue of human trafficking.”

Most shelters have high security protocols, including walled perimeters, security cameras, and an online database of migrants shared among shelters. (Through this database, shelters can flag persons known to be extortionists or for violent behaviour at past shelters.) Mazú Sifuentes stresses that shelter volunteers are no more at risk than any other tourist in the area.

However, working with vulnerable populations can still be demanding. Migrants often carry recent trauma from their travels. For this reason, FM4 Paso Libre asks volunteers to use discretion in their conversations with migrants— to not ask them about what they have seen or lived through. Rather, stick to easy topics, such as what they like to do or their profession. Self-care and knowing how to not take on migrants’ trauma and challenges is also critical.

“It is difficult listening to their stories a lot and realizing there’s not much you can do. It’s really an exercise in listening and being there to support rather than trying to fix problems,” says one shelter volunteer, Jenna.