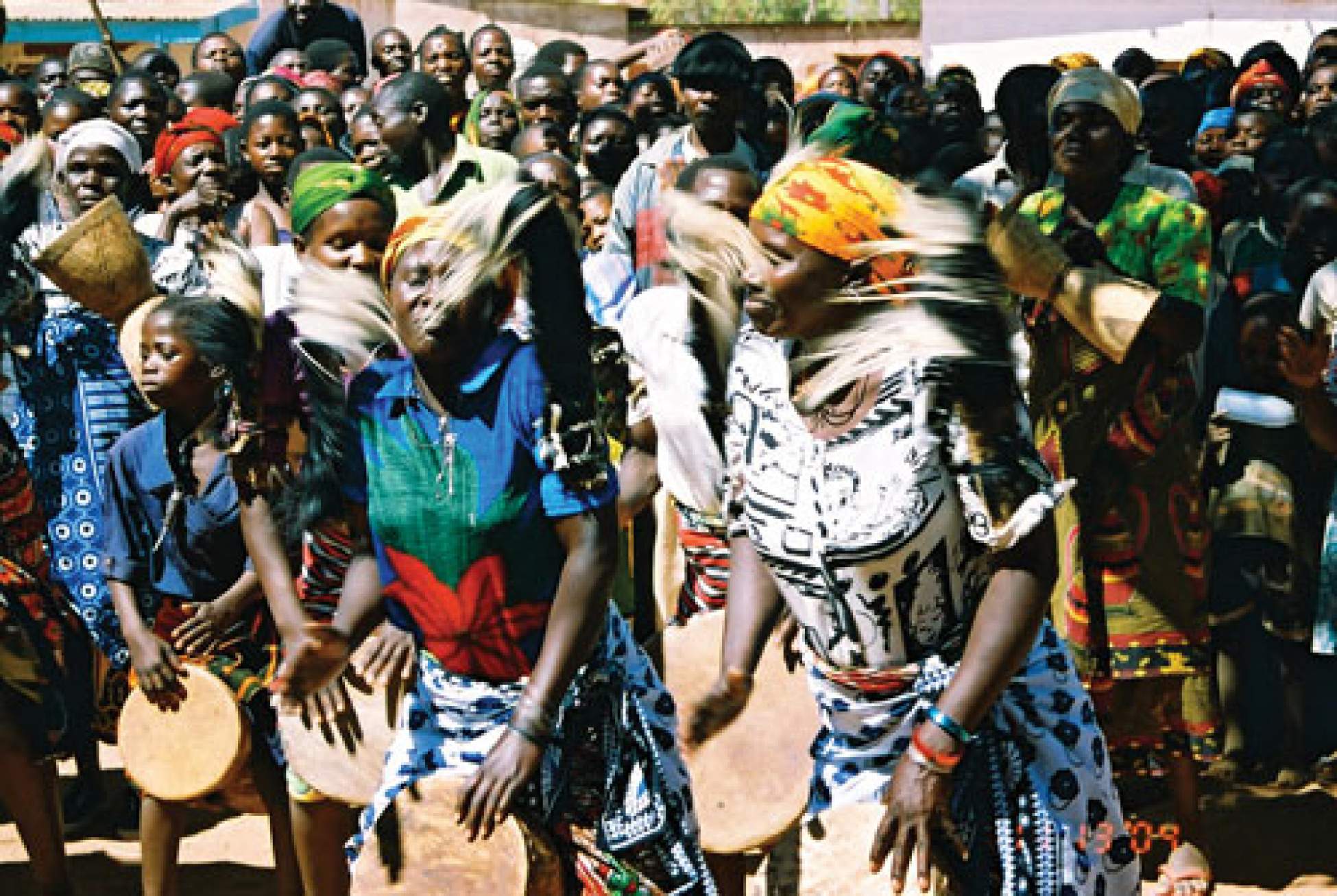 By  Tannis Hett and Tom Peacock

The challenges of beating HIV/AIDS in Africa are enormous—but the spirit of its young people may be even greater.

In regions of Tanzania where discussion about AIDS only happens in whispers, art and drama are getting people talking.

Drums beat as a group of young musicians take to the stage—a clearing in the dirt of the town centre. Their every move is watched by an audience of roughly 300 people from their community, the village of Mahae, in rural Tanzania.

One boy and one girl move to the front and begin a kind of love song rap. It's a youthful mix of modern and traditional music, with a serious message.

"You look into my eyes, I look into yours. There's no way of knowing that I have HIV."

This is 'edutainment'—a combination of education and entertainment, aimed at generating awareness and discussion about HIV/AIDS—and it's Africa's latest weapon in the fight against the killer pandemic.

In the audience are ten performers from a Tanzanian theatre group called Pamoja Tutashinda Ukimwi (PATUU) or, 'Together We Will Win Against AIDS', and eight students from the University of Waterloo, Ontario. For two weeks, the two groups have joined forces and travelled around rural areas of Mpwapwa District in central Tanzania, bringing their deadly important message with them.

Inspired by a PATUU drama performance the day before, a group of local kids are putting on a performance of their own. "The kids are maybe 13," says Canadian student Mary Carothers. "For them to have to be thinking about these things already is pretty mind-blowing."

This region of Tanzania, like many others across Sub-Saharan Africa, is an area where HIV/AIDS is prevalent—over one in ten Tanzanians is living with the disease. But speaking out about HIV is not socially acceptable here; discussing issues such as sex, condoms and AIDS is done in whispers or not at all.

"How do you address a problem if nobody is talking about it?" asks Archna Gupta, a science undergraduate from Cambridge, Ontario.

Gupta, 21, is a participant on a youth project organized through Canadian organization Youth Challenge International, in partnership with the East African NGO, Africa Alive! It's one of many projects that the two organizations run, with the aim of bringing together young Canadians and Tanzanians to work on HIV awareness projects, trying to help break the silence and the stigma surrounding the disease.

"Addressing AIDS education is something that people can do from any discipline," Gupta says. "You don't need to be a doctor to work in the area of health promotion."

And as the Canadian students have discovered, this is being proved in Africa—in pockets of Tanzania, and in many other Sub-Saharan countries. Local people are tackling the pandemic with energy and creative drive.

Perhaps the best-known example of edutainment comes from South Africa. Since 1994, media NGO, Soul City has broadcast television and radio dramas across the country, reaching an audience of millions with engaging stories that also address important health issues—including HIV.

The shows have such a following—and have been so effective in stimulating widespread HIV awareness and changes in behaviour within South Africa—that they are being used to inform UNICEF HIV programming across Africa and Asia.

Given the importance of the African oral tradition, the idea of edutainment makes a lot of sense. "Drama and dance are so embedded in the culture that it's an ideal way to raise awareness," Mary Carothers explains.

Today, more and more people across different areas of Africa are beginning to speak out, break the silence, and use arts to educate and inform. Tanzanian singer Feruz hit the charts with 'Ninao Ninao Ukimwi'—'I have, I have HIV.' Nigerian musician Femi Kuti, who lost his father to HIV, and South African reggae artist Lucky Dube are high-profile campaigners for AIDS awareness. In cities across Africa, information is becoming more accessible, and young people in particular, are listening.

In rural areas, where access to information and media is more limited, groups such as Africa Alive! are working to get the message across using public performances such as dance, music, theatre and games.

And although lack of information, or misinformation, is an enormous problem, these organizations are starting people talking—and even singing—about the disease. Performances are followed by a discussion about the issues.

David Danylewich, Executive Director of Youth Challenge International, stresses the value in Canadian participation in these initiatives, for both Tanzanian and Canadian young people. "They feel like they are part of a global movement," he explains, which is valuable for Canada's contribution to the fight against HIV.

After a total of five weeks working and living side-by-side with their Tanzanian counterparts, the Canadian students came away in awe of the young people working with Africa Alive!, some of whom are HIV positive themselves.

"I was really struck by the Tanzanian sense of community, versus North American individualism," says University of Waterloo student Khalid Janmohamed. "The people who are infected with HIV seemed to be more concerned about preventing further infection than about addressing their own immediate needs."

There is no question that the challenges of beating HIV/AIDS in Africa are enormous. But the spirit of its young people may be even greater.

"Twenty-five percent of our population is HIV positive," says twenty-one year old Zambian Cathy Phiri, an activist with Africa Alive! "But that means 75 percent is negative. Three out of four of us have the means to turn the situation around."

Produced with the support of the government of Canada through the Canadian International Development Agency.