You are here: Home/ Travel Intelligence/ Why We Travel/ Our Generation: Homegrown Electricity in Kenya

Our Generation: Homegrown Electricity in Kenya 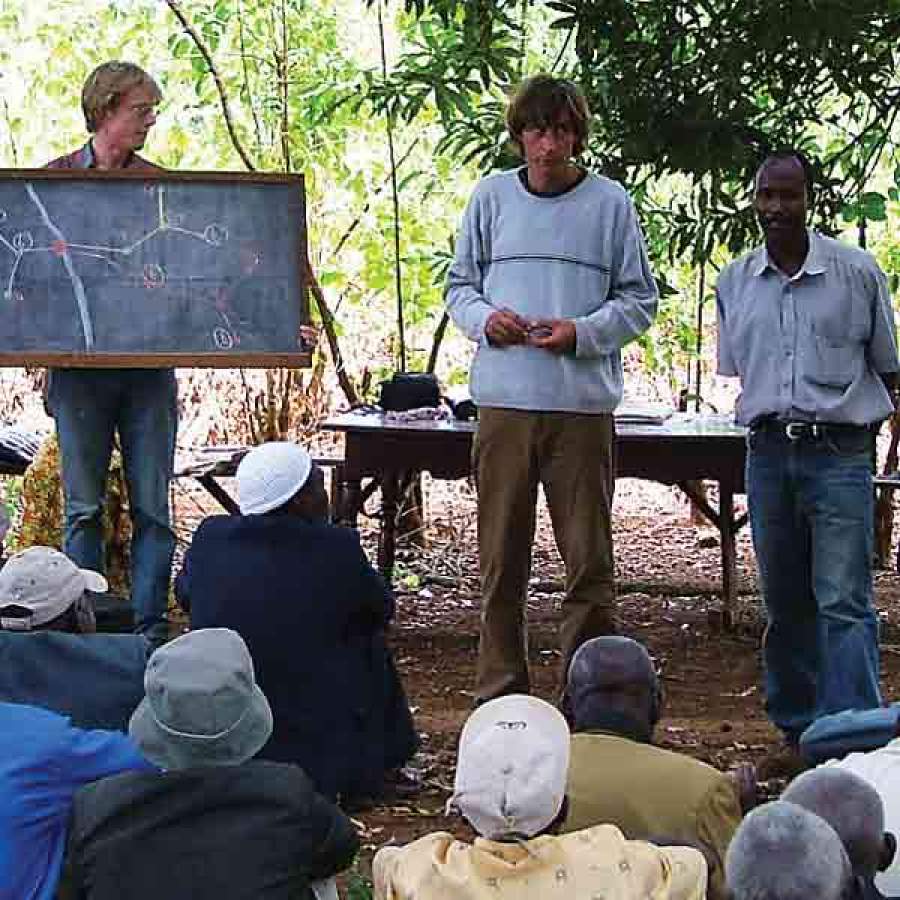 When Nyaga Ndiga was a young boy growing up on the slopes of Mount Kenya, he was fascinated with electricity.  Whenever he could get hold of metal wires or batteries, he hid them under his bed until he had enough for his Sanduku, the box holding his clothing and blankets.  He adapted it so that when he opened the lid, wires connected and a light went on.  Thereafter, Ndiga became widely known as “Nyaga with the light box.”

It’s not surprising that Ndiga, now in his thirties, is an electrician.  He’s also at the helm of what’s probably the first real community-driven micro-hydroelectricity project in the region.  The goal is to build three turbines, each with the capacity to light about 800 households in Kiangurwe, a coffee-growing community in the southern area of Mount Kenya.  The first turbine will be completed in 2008.

“When people visit the projects, they can’t believe what they see because it’s all done without outside engineers," explains Joost de Laat, an assistant professor in the Department of Economics at the Université du Québec à Montréal (UQAM) who has come onboard to evaluate the project's impact on the community.  "We’ve had outside engineers visit the projects, and not a single one of them understands how they were able to put all this together.”

The venture has been in the making since the late 1990s, when Ndiga and community members got together and discussed financing and building their own turbines.  Kenya’s national electricity company is working toward subsidizing power to rural areas, but the price is still too high for most.  Under Ndiga’s leadership, locals got excited about bypassing the national electricity company and doing it on their own.

Ndiga had the ideas and enthusiasm but lacked the know-how for building turbines, so he joined forces with Robert Mutsaers, a self-taught, creative Dutch engineer in charge of a construction project on Mount Kenya.

Start-up finances came from community contributions and a regional water board.  The group identified six sites in one of the rivers flowing down Mount Kenya where there was a large enough drop-off to power a small turbine and, without any help from experts, they started working in teams on multiple sites.  They diverted the river so there'd be a dry patch at which to build a small dam, then put a pipe on top and let part of the river water run through the pipe in order to put a turbine below.  Mutsaers scoured the internet for ideas on designing a turbine and they hired local companies to manufacture the parts according to his specs.

Around 2004, Ndiga and Mutsaers finished the prototype turbine.  They decided to install it in a community that was better off financially, hoping this community was in a better position to fund the costly distribution network.  They were also negotiating with an organization abroad for a low-interest loan to support the distribution.

Then disaster struck:  the consultant who was advising the organization colluded with certain local committee members to ask for more loan money than was needed.  Ndiga and Mutsaers realized the group had no intention of paying it back, and pulled out of the negotiations.  The pair, who by this point had officially registered as an NGO called Green Power, was disappointed but not despairing—at least they'd demonstrated that they could generate the power.

“Everyone was completely flabbergasted that they managed to build a turbine which worked fine and still works to this day even though it hasn’t been getting proper management for years,” recounts de Laat.

This time around, Ndiga and Mutsaers are doing it differently.  They’re now working in the community of Kiangurwe—less than 20 kilometres from the first community—and are in the process of installing a turbine there.  Anyone living within a few kilometres of the site can pay a small fee and register as a member, with an obligation to provide a certain amount of work.  To ensure things go smoothly, they’re getting pro bono help from a New York law firm.  They’re working slowly, and spending more time interacting with the local committee and its 1700 registered members, to ensure everyone is part of and committed to the process.

At the Kiangurwe site, there’s room for three turbines, each expected to produce around 80 kilowatts of electricity, enough for 800 households.

"When people visit the projects, they can't believe what they see because it's all done without outside engineers."

“That effectively means that every household, if they all have power at the same time, would only have 100 watts,” explains de Laat.  “100 watts is not much...  but there are energy saving lamps and low wattage televisions.  You can have lamps for about five to seven watts… so you can have potentially eight lights and a television running at the same time.”

The number of households in rural Africa with electricity is low:  some estimate four to five percent.  De Laat says, “Now, people sit in the dark at night and they use kerosene or paraffin to light their homes, or wood in some cases;  that’s a very inefficient way to light your home, it’s very expensive.   [Electricity] is a lot cleaner, you don’t have smoke in the house.  Kids will be able to study at night, they can power radios, they can watch television.”

With one turbine complete, and the second to be built next year, the community of Kiangurwe had one crucial decision left to make:  who gets connected first?  Together, they decided there would be only one fair way to decide—to flip a coin.  “People were very excited about the idea that.  No one is favoured, everyone has the same chance.  It’s not the ones who are politically connected, it’s not the ones who are richer,” says de Laat.

UQAM is committed to helping the project in the long term:  last year two students worked on the project and this summer four students are evaluating the project’s impact and helping Green Power with their database and training workshops.

Ultimately, de Laat sees potential for the future.  With proper management, he says they’d be able to provide electricity for business or agricultural uses, and down the road there’s the possibility to connect to the national electricity network.  The community is in the driver’s seat and, according to de Laat, that’s what can make this project succeed where others have failed.