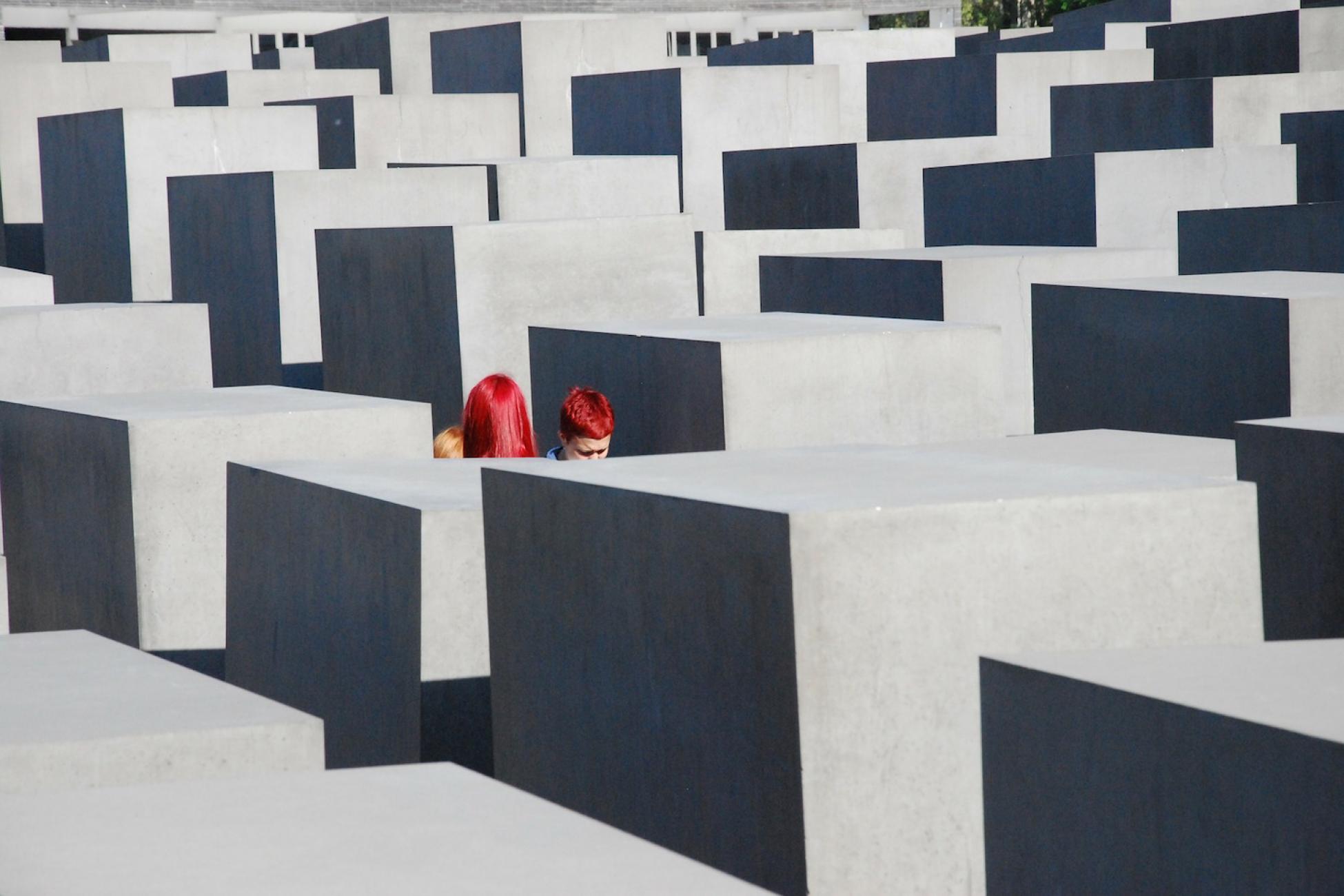 Visitors at the Holocaust Memorial in Berlin pixabay.com CC0
By  Audrey Ardanaz

Before you take a selfie, take a step back.

"I was here," reads the etching inside a former women and children´s barracks at Auschwitz-Birkenau.

They were here. Though there may be some physical reminders of their existence—in the form of shoes, silverware and eyeglasses—there is no digital evidence. There are no personal photographs or emails.

Stolen gunpowder; the stolen substance of four women escapees and the cause of 10 deaths at the firing wall. The wall your very eyes are looking at. Just bricks, but you’re trying to convince yourself that perhaps that dark splotch to the side is something else.

10,000 cases of unwound hair; a rolling landscape of brown and black, some grey and blonde lines. It almost looks beautiful.

“And my question is: How can we keep memory? Is it possible to share this memory?”

That was the question asked by filmmaker Sergei Loznitsa in an interview with the New York Times about his documentary, Austerlitz, which examines the role of tourists at concentration camps.

Stepping through the gates of Auschwitz with my friend, a Polish-American video blogger, we decided that the answer is no; it's not possible to share this memory—in all of its brutal accuracy—with people who are our “followers.” That no, a memory could not be kept or shared through a photo or video. Something essential would be undoubtedly lost.

As we passed by the gift shop—complete with mugs and postcards—we knew we could not say the same for our fellow memory sharers of the tour, most of whom had their cameras out, ready for the shot. Though my friend and I made a very conscious decision not to take any pictures, we wondered what the others thought when they decided to snap away.

Upon looking at Instagram posts of the Auschwitz and Birkenau camps, the iconic images: the gate with the words “Arbeit Macht Frei" ("Work Makes You Free"); the singular train car left on the tracks that run through Birkenau; and the barracks. Most of my friends answered that if they were to take, or had taken, a picture at the camps, it would be of these familiar images.

The “I was here” factor.

The “I was here” scribblings on the inner corners of the barracks walls did not belong to the women or the children who were packed into them, naked and starving. They belong to the tourists that come more and more frequently to the camps. However, the meeting point between the experience of a prisoner in 1943 and a tourist in 2017 is a murky morning.

Impulses to leave our mark have become as easy as a posted picture and a hashtag (#iwashere). This is an especially strong impulse as we travel and are pelted by new experiences. Our social media sites are our legacies and we have started naturally documenting almost all our daily experiences, without drawing lines until after the fact.

You can step into a museum, a castle, a palace or a school and be told “no pictures allowed.” However—in between these walls that bore witness to such horror with our feet planted on dirt that flowered over the physical remains of a culture—there are essentially no limits to what we do with our technology.

What do our posted pictures add? Where does sacred ground meet social media in an acceptable manner?

Susan Sontag wrote about the fragility and volatility of the photograph: “plagued by the usual ills of paper objects; they disappear, they become valuable, and get bought and sold; they are reproduced.” In large part, this is no longer the case. But a digital photo enters a modern canon of existence; it can automatically become sorted, indexed and filed away into a new kind of history.

So what do our posted pictures add to our collective memory? Where does sacred ground meet social media in an acceptable manner?

The extreme side of this conundrum is portrayed the “Yolocaust” series. Though this term makes each part of me cringe, top to bottom, it's an important series to look at. Created by Shahak Shapira, a German-based satirist of Israeli descent, the series shows images of what some would deem inappropriate behaviour (including selfies) superimposed over images of concentration camp prisoners and victims.

Though most of these “inappropriate” photos were taken at Berlin’s Holocaust Memorial, it is a theme consistent across all the Nazi concentration camps, memorial sites and any scene of immense human disaster. In an interview before the reveal of the memorial site, architect Peter Eisenman stated, “I said all along that I wanted people to have a feeling of being in the present and an experience that they had never had before. And one that was different and slightly unsettling. . .The world is too full of information and here is a place without information. That is what I wanted.”

Being in the present.

For me, personally, being in the present meant working hard to imagine myself as an inmate. Seeing was not enough. Feeling was not enough. I had to find the inner connection between my current world and the physical remains of a world which was so difficult to conceive of. Though with thousands of visitors a day and counting (there were 2.5 million visitors in 2016), I can imagine that evoking this feeling is not easy for everyone.

There can be no guidelines or rules for an experience. There can only be questions brought to the table. Perhaps the most important one being “what are you going to do to remember this experience, and learn from it, in the best way possible?”

What I think any interested visitor should do prior to visiting a concentration camp, especially Auschwitz, is not simply to familiarize themselves with the history, but with the modern interpretation of collective memory. They should familiarize themselves with the “Yolocaust” photos, with Loznista’s documentary, and with interviews of the architects and curators of the memorial sites. They should simply ask questions and seek answers.