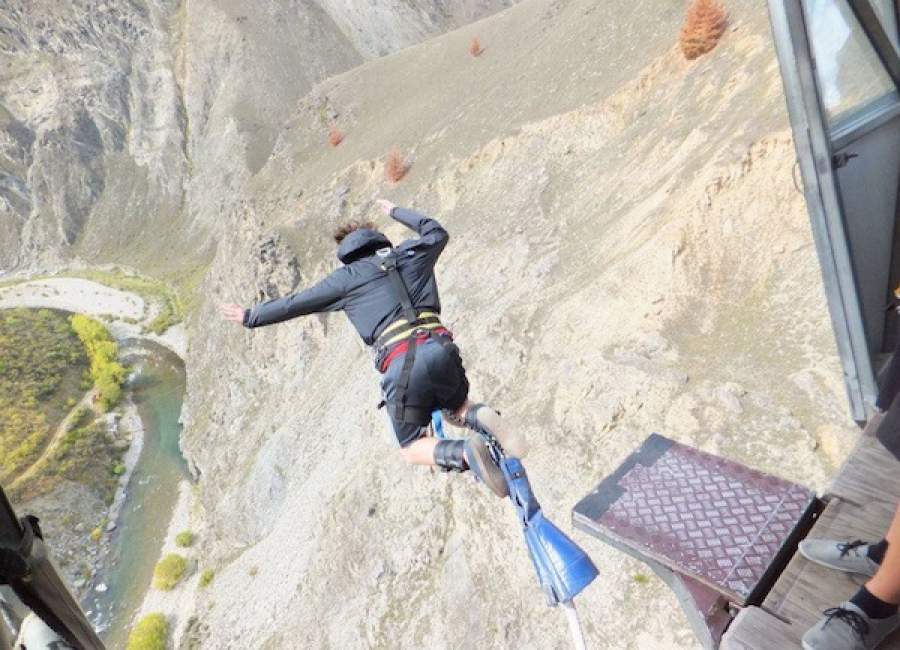 Eric takes the leap in Queenstown.
By  Eric Forrest

The best places for adventure junkies in Queenstown, New Zealand.

Over the Easter break, four buddies and me packed up and flew south from Auckland to Queenstown for what was arguably the most adventurous long weekend of my entire life.

Before I get into the details of the trip I need to stress that Queenstown is one of the most spectacular cities I have ever had the pleasure of visiting and I would highly recommend it to anyone traveling to New Zealand—or anywhere even remotely close to it for that matter. Queenstown is a quaint little city filled with cafes, bars and shops nestled in a valley completely surrounded by mountains. It’s booming with just the right amount of adventure and leisure to make it an ideal getaway for everyone.

My recommendations of must-dos in Queenstown, New Zealand:

This was by far the craziest thing I did on this trip—and arguably in my entire life. I cannot even think of a word to describe exactly how I felt while I was doing it, but if I could make up a word it would roughly be defined as a combination of adrenaline/amazement/terror.

The Nevis Bungy is a tiny gondola type box suspended approximately 440 feet high across a gorge over a river, held up by a series of wires. You are then brought across in a smaller gondola with four or five people at a time. Because I was the heaviest of all of my friends I was forced to jump first (Nevis rules), which wasn’t ideal, but I was on an adrenaline high for the rest of the day, which made up for everything else. After jumping my knees were a little bit weak for a few minutes but all in all it was the most spectacular accomplishment and I am so glad I did it.

At the edge of the city lies a gondola, which takes you up to the observatory to look over all of Queenstown. At the top of the hill lies the luge. The basic concept is you sit in a little cart and ride it down a track built throughout the top of the mountain, pushing forward on your handlebars to move and pulling back to stop. It is fairly easy and at first there was quite a bit of debate of whether it was worthwhile doing, but we did it anyways and it was well worth the money.

If you have the means, I highly recommend driving out to Glenorchy, which is about an hour from Queenstown. The scenery along the way is unreal and is loaded with immense amounts of hikes. Rumor has it that many locations throughout the region (including a place called Paradise) were used when shooting the Lord of the Rings films which might entice fans of the movies to want to check it out.

A hidden gem that’s popular with the locals is a little place 5 minutes outside of the city nicknamed “Little Thailand” (for reasons that I do not have the answer to). Driving along one of the main highways out of the town along the lake there is a slightly hidden path off the side of the road with a small gravel area to park your car. Down this incredibly steep, thorn-infested path you come to the edge of a cliff approximately 30 to40 feet above the water with a makeshift rope ladder to pull yourself after you jump of course. After spending three hours trying to find this place and hiking through the sketchy brush, the exhilaration of the jump overruled the annoyance of the search and made it totally worthwhile.

Arguably the most popular restaurant in all of Queenstown, Fergburger was absolutely packed at all hours of the day hosting wait times of up to 30 minutes. That might seem outrageous but your mind will be changed instantly after taking your first bite. We went back three times and it was never a letdown. It was definitely the biggest and best burger I’ve had in New Zealand and if burgers are your thing, you won’t want to pass this gem up.

Milford sound is about a four-hour drive from Queenstown (there are also helicopter tours available from the city depending on how much cash you are prepared to drop) but this one is an absolute must-do. We arrived late in the day due to oversleeping so the only thing we were able to do was a boat cruise through the sound but it was still unbelievable. We saw amazing waterfalls and live seals sleeping out on the rocks. The scenic drive in was also amazing and I would put it in the top things to do in the south island.

Eric Forrest studies Multimedia and Communications at McMaster University in Hamilton, Ontario. He jetted to the other side of the world to study Film Television and Media Studies at The University of Auckland in New Zealand. Ever wonder what it’s like to study with “Kiwis”? Follow Eric’s adventures!