You are here: Home/ Articles/ Beyond the Guidebook/ Closest to the Setting Sun: Morocco's Mysterious Appeal 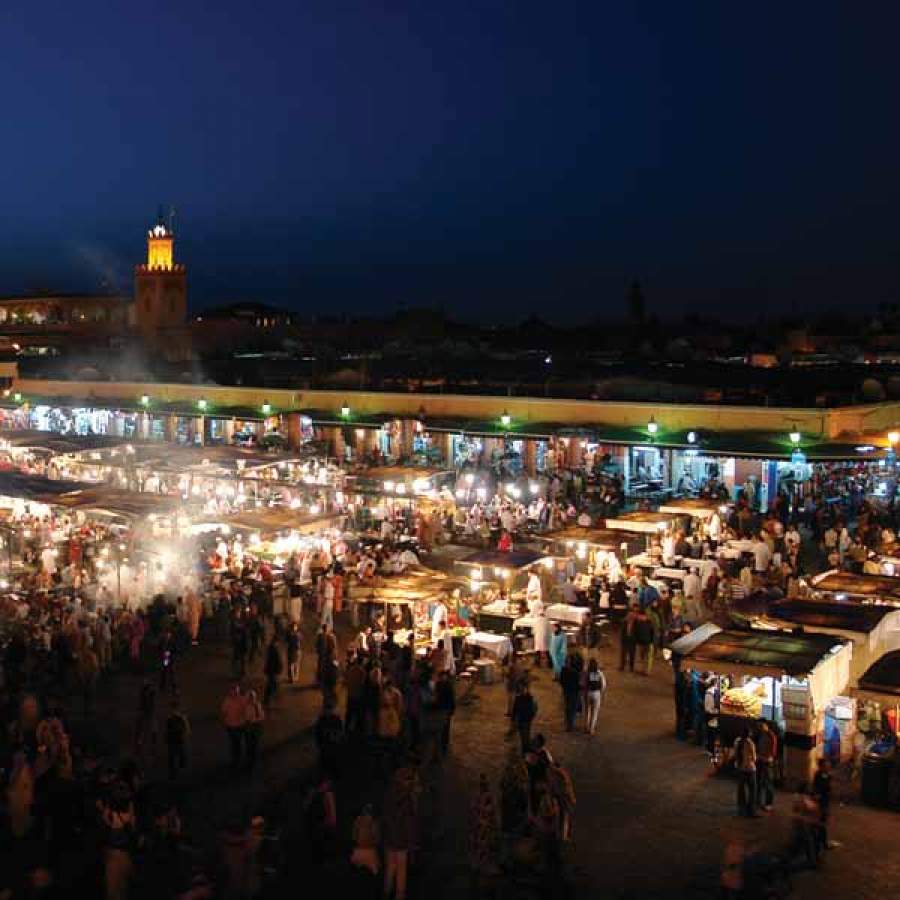 'Lawrence of Arabia,' 'Babel,' and Alfred Hitchcock's 'The Man Who Knew Too Much' were all shot in Morocco—the country has a certain mystique that has captivated the West. Simon Worsfold discovers what makes this desert country so special.

How are you my friend? What is your name? Where have you come from? Okay, that’s way too many questions.  My name is Abdeltif.  This is my shop.  Can I help you some way? I don’t believe it, all I did was stop to stroke a cat and this guy’s already trying to sell me something.  You like cats? They are good in the medina.  Now, what can I help you find?

To my shame, when Abdeltif led me into his shop I had a guard up the size of Mike Tyson.  Many a guidebook warns of the in-your-face approach of the street hustlers in Morocco.  But, as I discovered, they couldn’t be more wrong.  What followed was a disarming encounter when this earnest and compassionate man enquired about the extent of my family and proudly explained the joys of his, as we shared several pots of sweet mint tea.  This was my first experience of the Moroccan hospitality that flavoured the rest of my stay and quickly made it one of the most enjoyable countries I have visited.

But Marrakech wasn’t always this way.  There is debate about the translation of the city’s name, but some have said Marrakech means ‘leave quickly'.  Its main square is known as Jamaa el-Fna—'the place of the dead'—in memory of the heads of dissidents once displayed there in warning to others.  Today, it is the heart and soul of the city, an open space the size of four football fields and the perfect counterbalance to the warren of souks (markets) nearby.  As the sun sets, the square erupts with humanity.  Marakachis and tourists alike dine al-fresco on harira (soup), brochettes (kebabs) and hunja (cinnamon tea), while gazing onto crowds of people encircling storytellers, drumming bands and street boxing matches.  A seat at a food stall is surprisingly tranquil given the tens of thousands of people gathered around you.  It is the same way every night.

Marrakech resides beneath the Atlas Mountains, and escaping the city's commotion could not be easier.  A 60-kilometre drive, or $4 taxi ride, to the town of Imlil will bring you to the base of North Africa’s highest peak, Jebel Toubkal.  At 4163 metres, it is a tempting prospect for many hoping to bag a quick summit (the walk takes just two days).  But the route gets busy and the valleys below are arguably more picturesque—and definitely a better place to get acquainted with Morocco’s Berber people.

Unlike Arabs, Berbers are indigenous to Morocco.  They got their name from the Romans who had a habit of calling anyone who couldn’t speak their language ‘barbarians’ (so that’s everyone, then)—and it stuck.  In Moroccan culture, they are known as Amazighs, or free men, and enjoy a proud position within it.  Their hospitality only grows the further from the city you go; during my brief stay in their mountain homeland, I was entertained in the homes of no less than three families.

One night, under the imposing shadow of the Toubkal range and a ghostly moonlit sky, the other trekkers and I were treated to a seductive performance of traditional folksong.  Our hosts, undeterred by the lack of instruments, simply dried the cooking pots and washing bowl, spun them over and began a slow rhythmical chant that grew in fervour until we were all dancing and clapping in procession.  We may only have been at 2000 metres, but it was better than any summit.

In the High Atlas Mountains that Toubkal dominates, the landscape is red and rocky, broken only by patches of black volcanic rock.  Occasionally vegetation can be spotted in the valley below, where irrigation allows wheat to be cultivated among walnut and almond trees.  But as you travel east, away from Marakkech, you find rich green expanses that defy the common conception of Morocco.  This is especially true around Tinghir (Tinerhir), best known for the vast Todra Gorge nearby, which is home to one of the country’s largest date palm groves, with 25 kilometres of the fruit-giving trees.

The man (for it is always a man in Morocco) charged with showing me around this verdant valley was Hassam, a Berber.  I asked him if he felt tourism had been good for the area.

“Very good,” he nodded back to me with a grin.  “Many people, many jobs.  Every year we see more and more.  It is good to share cultures.  Travel is the best university for meeting people.”

I couldn’t agree more.  He had a curious take on alcohol though.  Technically, the Koran forbids it yet in practice it is tolerated in most parts, if you can find it.  The Berber community in Tinghir makes a fig schnapps once a year for the Eid el Kabir festival, two months after Ramadan.  “One glass and head like couscous,” Hassam pronounced with an even bigger grin.

I was intrigued.  Doesn’t that go against Muslim culture? I asked.  “Yes and no,” came his reply.  “Good for party.  Bad for mosque.”

Travelling still further east, the lushness gives way to arid plains where the tents of nomadic clans are clear to see.  I caught up with one led by a charismatic, blue-turbaned man named Muhammad who introduced me to the renowned Moroccan art of carpet weaving.  Did you know that a camel-hair rug is more prized in these parts than one made of silk? I didn’t, and Muhammad’s demonstration of its virtues was enthralling.  It is an honoured tradition handed down through maternal generations for centuries, but one he worries is under threat due to the number of young women moving to the city to go to school.

Finally, Merzouga:  the start of the great Sahara.  Not a place I expected to rely on a four-season sleeping bag and waterproof clothing, but man was I glad to have them.  Yes—in a region that had received virtually no rain for three years, I hit a downpour.  The camels loved it.  They were my carriage to our quarters for the night:  a solitary black tent, beneath a 150-metre sand dune, shared between four guides and fourteen guests.  From here we were due to enjoy a Sahara sunset—if the rain stopped.

Berbers got their name from the Romans who had a habit of calling anyone who couldn't speak their language 'barbarians'—so that's everyone, then.To our unbelievably good fortune, just as the sun reached its nadir the moody clouds parted and a rosy glow crept towards us, warming the landscape as it went and illuminating a sharp profile of the sand waves in front of us, curled like chocolate garnish on a cheesecake.  It was an awesome spectacle and the contrast between the hot pink sands and dark, smoky skies will stay with me for a long time.  Feeling sufficiently melted by all this, I retired to the tent where a convivial atmosphere was growing in anticipation of the hearty tajines to come—delicious cumin and saffron-infused casseroles of chicken, carrots and potatoes cooked in a clay pot over a coal fire—and once again we were entertained by the hypnotising rhythms of Berber folksong.  The night’s sleep was broken only by the pre-dawn cackle of a cockerel that woke us in time for sunrise.

Moving west from Marakkech, to the coast, lies one of Morocco’s cultural and architectural treasures: the dreamy coastal town of Essaouira, populated by fishermen and artisans.  The change in pace from the cities inland is enough to take your breath away, and the Atlantic winds, which make Essaouira one of the world’s top kite surfing spots, often do just that.  Its medina—the old quarter of the city—is protected by canon-decked seaward fortifications.  Within the tall, whitewashed walls you find streets of musicians, artists and wood carvers busily creating a living.  The port outside is clustered with fishmongers and open-air seafood cafés looking onto the large town square.  The town houses a large ex-pat community, and it’s easy to see why so many return tickets are unused.  Many of the traditional riads (homes built around a courtyard, fountain and fruit trees) here are owned by Europeans, who convert them into hotels.

In a region that had received virtually no rain for three years, I hit a downpour. The camels loved it.

To find out what all the fuss is about, I splashed out and stumped up the cash to stay in one right on the seafront during my stay.  I was not disappointed.  My room shared a rooftop terrace, with views over the setting sun, and the family that ran the place made me feel like I was a long lost relative back from a tour of duty.  And how did I find it? By employing the services of a kindly old faux guide.  Like many of the best riads in Morocco, there is nothing to distinguish it from other homes in the medina.  The front door bears simply a name and a number.

The Moroccan government has been heavy-handed with those trying to make a buck from helping lost tourists... but it still goes on.  What you make of it depends on your perspective.  Some travellers might prefer the ease that comes with hiring an official guide.  But for most of us, at least at times, it’s better to go with the flow and take advantage of local knowledge wilfully given.  You'll better allow yourself to appreciate the warmth, charisma and generosity of the Moroccan people—and you’ll likely have more fun in the process.