You are here: Home/ Articles/ Beyond the Guidebook/ Of Men and Bulls: The Spanish Tradition of Bullfighting

Of Men and Bulls: The Spanish Tradition of Bullfighting 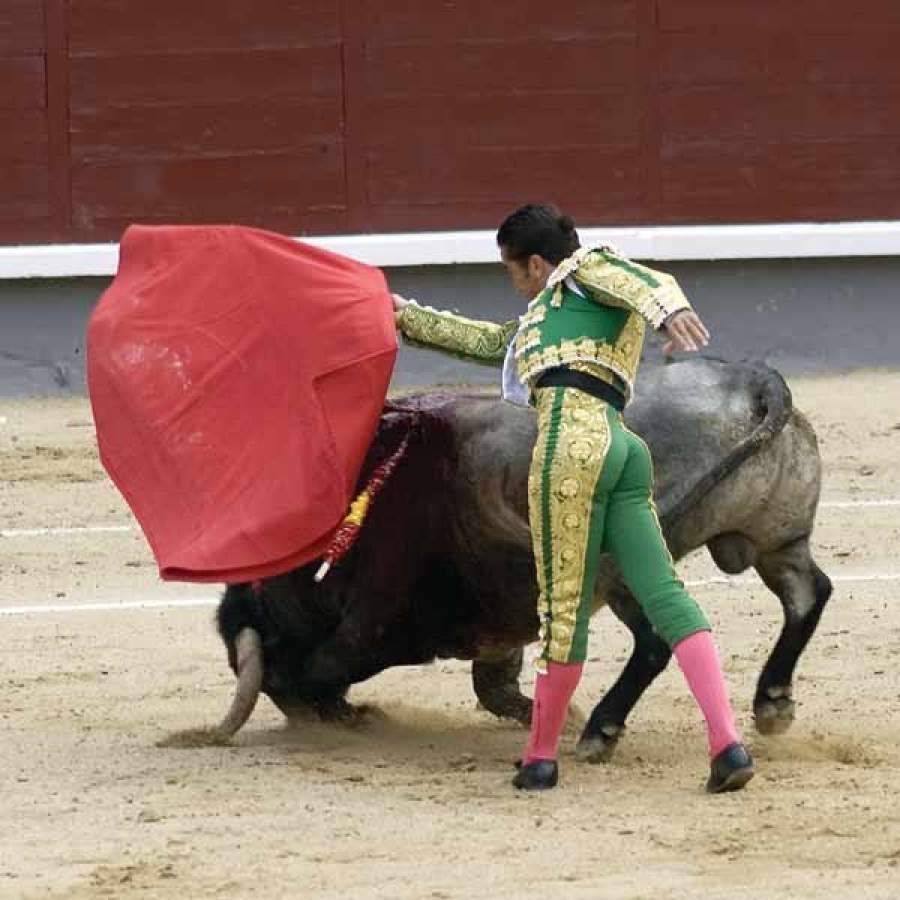 Long-standing Spanish tradition or nothing more than animal cruelty? Colin Moore checks out a bullfight in Madrid for a taste of the debate.

When it bursts into the arena, you can feel your breath suck in.  Even from a distance there’s no getting around it, this is one big animal.  It bounds out of the gate like it’s been held back for a lifetime and let go.  Three banderilleros [bull handlers] are waiting on the field, but don’t let the wide magenta capes fool you.  They’re really the assistants.  Only the matador will get celebrity billing on the poster and perform the graceful manoeuvres known as “the dance with death.”  After all, every story needs a hero.

In Spain, the rhythm of life takes its cues from time and temperature.   From March to October, it’s bullfighting season.  La Plaza de Toros de Las Ventas in Madrid is where it happens, and has done since 1931.  The outer face of the arena is browned like perfectly toasted bread.  Its ornamental brickwork and horseshoe arches reveal Muslim influences, an architectural style known as mudejar.  As you enter, you are surrounded by ceramic tile and cold stone.  Red musty cushions can be rented for a Euro, but roughing it has a certain gruff coolness about it.  It is a blood-sport after all, and one with multiple roots.

Spain’s relationship with the bull has evolved over the better part of 2000 years.  When the Moors landed in Gibraltar in the early 8th century, bullfighting already existed, though the practice was only starting to take shape as a public performance.  At that time, it was simply a means for young men to demonstrate their courage to others:  a young man would taunt and humiliate the bull until it charged, at which point he’d leap or somersault over it. The Moors added the element of attack on horseback. The infamous red muleta [cape] used in the finale was introduced in the 1700s by matador Francisco Romero. His son, Juan Romero, introduced the estoque [sword], more or less completing the classical Spanish form.

Bullfighting was largely the domain of the aristocracy until the 18th century when Bourbon King Philip V, denounced it as barbarous and any noble taking part in the practice was threatened with excommunication.  The general public, however, carried right on.

When aficionados speak of la corrida, or the bullfight, they speak of a tradition tied to the human condition.  Words like life, death, desperation, valour, success and despair are used proudly in their explanations.  The performance is divided into tercios [thirds], during which the matador sizes up his opponent’s strength, movement and mood.  In the tercio de varas (lances),the picadores [lancers] enter on horseback.  The bull slams into the padded horse and attempts to lift it from underneath.  This gives the picador time to lance the bulky neck and shoulder muscles, lowering the bull's head for the final kill. The tercio de banderillas (flags) follows.  Capeless banderilleros run at the bull head-on, piercing its flanks with colourful barbed rods called banderillas.  The tercio de muerte (death) completes the action. This is when the matador does his thing, engaging the bull in a series of passes to show his mastery over the animal before impaling it through the heart and ending the ritualized melodrama.

A top matador—literally, killer—is hailed for his courage and poise under pressure, but also his respect for his opponent.  Ernest Hemingway certainly saw it that way, and wrote about the ritual behind the apparent barbarism and the reverence behind the ritual in his work, Death in the Afternoon.  A line from The Old Man and The Sea, though, sums it up just as well.  “Fish, I love you and respect you very much.  But I will kill you dead before this day ends.”

In recent years, matadors have been accused of grandstanding—they are said to be acting more ostentatiously in order to impress the audience.  Some point fingers at the modern media.  It has given many matadors pop-star status and the tabloid coverage that accompanies it, but idolization is nothing new.  Manolete, a heavyweight known for his poker-faced approach to the sport, was fatally gored after a return from retirement in the late 1940s—in response, Francisco Franco, head of state at the time, allowed three days of national mourning.

Arguments for and against bullfighting have been raging for centuries:  valiant tradition or immoral spectacle?  Prior to the 18th century when Philip V appealed to and convinced the pope to ban it, the sport was largely the domain of the nobility, and the Catholic Church actually bred fighting bulls.  Later, notorious Spanish dictator, Francisco Franco openly allowed it and even named it Spain’s national sport.  Today, opponents like Spain’s Asociación para la Defensa de los Derechos del Animal (the Association for the Defense of the Rights of Animals) are trying to ban the practice.  And they have started to see victories:  in Barcelona attendance at bullfights is falling, and it is rumoured that its one remaining bullfight arena may close.  State-run broadcaster TVE will no longer televise live bullfights, heeding a 2004 code that prohibits violence on public television at times when children are likely to be watching.  However, the National Association of Bullfight Organizers calls these developments “a shameless, unjust attack on culture.” The battle continues.