You are here: Home/ Articles/ Beyond the Guidebook/ Elephant Treks: Don't Get Taken for a Ride

Elephant Treks: Don't Get Taken for a Ride 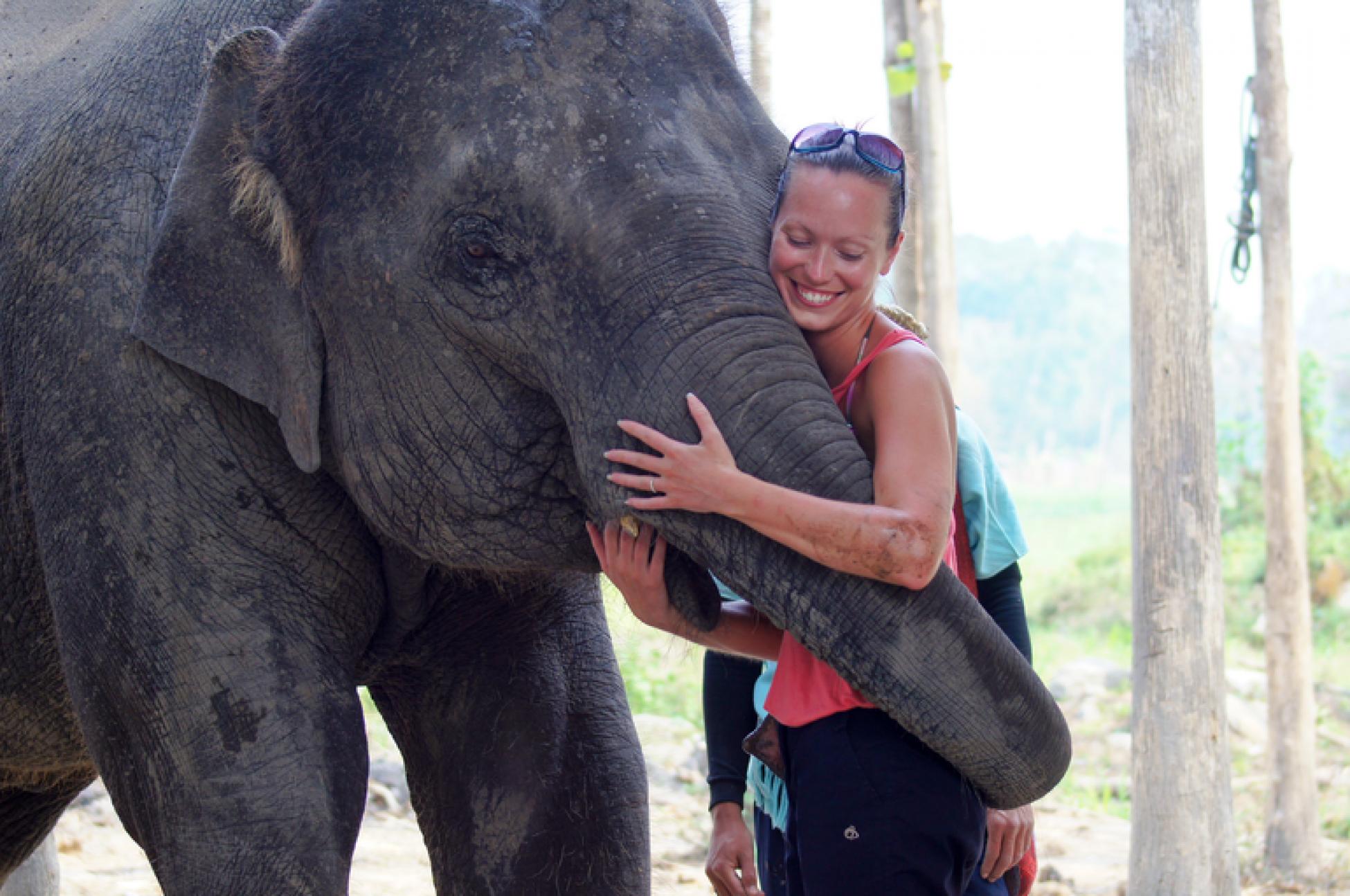 Evo Flash via Flickr CC BY 2.0
By  Lynn Spreadbury

A young elephant named Faa Sai hops up a riverbank as if her legs are invisibly bound. Around her a herd with similar disabilities bathes and grazes in the steamy Thai valley. Even on flat ground she lurches awkwardly, throwing her weight from front to back.

Days earlier, Faa Sai arrived at the Elephant Nature Park (ENP), a wildlife sanctuary in northern Thailand that focuses on rehabilitation, advocacy and education. Like other members of the herd, Faa Sai was rescued from one of the country’s many “elephant camps” that offer trekking and entertainment packages to tourists. There, she was a highly trained star. She could throw darts, ride a bike and paint pictures before taking a deep, fancy bow. Her life alternated between training, trekking and acrobatics, all while being shackled. Now, free for the first time, she must relearn to walk naturally.

Faa Sai’s story is common. In 1989, Thailand’s ban on logging—formerly a key industry for the country—coincided with a rise in tourism. Unemployed elephants, once used to clear forests of teak, were retrained to carry passengers up jungle trails, perform tricks or play sports like soccer.

Today, sold as an authentic Thai experience, an interaction with these cultural icons is considered a “must” for the country’s 26 million annual visitors. The industry is thriving, but unbeknownst to tourists, they may be hurting the very animals they’ve come to admire.

“People aren’t aware of the issue,” says Mark Watson, executive director of Tourism Concern, a UK action group for ethical tourism. “Much of it is hidden. Once [tourists] are told how painful it is for the elephant and how they’re trained, they don’t want to participate.”

While elephants can shoulder up to 150 kgs (330lbs) for four hours, those limits are exceeded during treks. Trekking elephants frequently haul over 200kgs (440lbs) for eight to 10 hours a day, leaving them prone to stress, overheating and dehydration.

In the wild, elephants would cool themselves bathing, consume up to 100kg (220lbs) of vegetation each day and roam great distances in social groups. Like people, elephants need companionship for well being. In captivity, they are chained with as little as four centimetres between their feet and rarely—sometimes never—walk freely. They have little or no access to streams, mud, supplemental food or other elephants.

Without the ability to recognize an animal in danger, tourists unwittingly contribute to its struggles. “The problem is that tourists don’t know what a healthy versus unhealthy elephant looks like. They have no comparison,” says Jodi Thomas at ENP. “Elephants are frequently owned as investments. Even if the animal is hurt or pregnant they’re still worked, sometimes to death.”

The issue is larger than the camps and Thailand. Tourism is one of the world’s biggest industries and elephants are commodities in a quest for revenue. Working elephants “beg” in cities alongside mahouts (trainers), who charge tourists to feed them. Babies too young to be separated from their mothers entertain people alone in crowds. Animals with unsightly injuries languish in forced breeding programs. All across Asia, from India to Vietnam, overburdened elephants suffering from malnutrition, exhaustion and abuse collapse under the strain.

Many members of the herd at ENP are recovering from spinal injuries and disabilities related to working in the tourism industry. Weight from trekking loads press on their vertebrae causing pain and deformities, especially for young, growing elephants. Straps cause sores and infections. Other elephants suffer from broken bones or dislocated joints caused by falls, car accidents or failed breeding attempts. Some are blind from improper eye care, complicated by circus spotlights or cruel mahouts. Foot problems and abscesses from standing on hot tarmac are other common ailments.

A highly trained star, the elephant could throw darts, ride a bike and paint pictures—all while shackled. Now, free for the first time, she must relearn to walk.

While it’s hard to know exactly how many elephants die each year as a result of the work conditions, their life expectancy provides some insight. In the wild, elephants can live for up to 60 years. With good treatment, some working elephants in Asia can rival that, but most don’t make it past 40.

It’s also having a devastating effect on wild populations of endangered Asian elephants. Today, only an estimated 3,000 wild elephants live in Thailand—down from over 100,000 in the early 1900s. Since demand for babies is greater than the number born in captivity, traders illegally kill wild adults to steal their young, yielding a $22,000 USD prize.

Around age four, young elephants are subjected to the phajaan, or taming process, where men force elephants into submission. Calves are taken from their mothers, chained, starved, sleep-deprived and severely beaten to make them compliant. Mahouts stick elephants with sharp bullhooks and other devices to cue tricks and movements.

Unlike domestic animals, there is no history of selective breeding; no cultivation of preferred traits or less aggressive tendencies. These elephants, or their parents, have come directly from the jungle and are wild. Any “gentleness” tourists experience is a result of the phajaan.

While the phajaan is successful in eliciting submission, defining “success” is murky; some calves die in the process, some relent and some, like Faa Sai, remain defiant.

“Someway, somehow, she kept a sliver of her spirit,” says Thomas. “She had a lifetime ahead of performing, street begging, breeding, riding, you name it, but she still had her spirit which made her unpredictable.”

The result? She killed her trainer. When ENP found Faa Sai, she was chained in a concrete pen, thin and thrashing in her stall. “No one would touch her,” says Thomas. ENP bought her and brought her to the park, but once released and after years in chains, she couldn’t comprehend her legs were free.

Fortunately, awareness and action against elephant tourism is on the rise. ENP’s veterinarians aid each rescued elephant such as Faa Sai, whose name means “Calm After Stormy Skies.” For many of the 65 residents, it’s their first time roaming free and they are their own best therapists. They form social circles, protecting those with handicaps and guiding others who are blind. Together, they raise orphans brought to the site.

Advocacy is also a key part of ENP’s work. While Thai laws conserve wild elephants, banning hunting and capture, working elephants are unprotected, leaving them vulnerable to abuse. However, last year, ENP secured the first legislation, stipulating all elephants over 55 must be retired.

Global tour operators STA Travel and Intrepid Travel stopped offering elephant treks, and Lonely Planet no longer highlights them in their guidebooks. World Animal Protection obtained the domain AuthenticElephantRides.com touting “the very best elephant experiences” from India to Bali, but instead of itineraries, a satirical video delivers the truth.

It’s not just the animals that are in danger. Recently, a calf gored a woman trying to feed it and an enraged male attacked its mahout charging off with a mother and daughter on board. In February 2016, a Scottish tourist was also thrown from a male elephant in heat.

Are there alternatives? Yes. While eliminating elephant tourism completely is unrealistic, interactions can be modified. Tourists can avoid camps that offer rides, games and unnatural tricks. Instead, they can visit approved sanctuaries and operators who offer healthy, positive activities (see sidebar below).

As some visitors and volunteers have already discovered, walking next to an elephant is more companionable than being on it. Feeding it is more intimate than watching it paint, and splashing together in sandy streams is far more loving than sport.

Volunteer with Elephants in Thailand

Elephant Nature Park
Visitors can spend a day or overnight at this sanctuary in Chiang Mai bathing, feeding and observing the animals. One to two-week volunteer opportunities are available. ENP also has a sister site, Elephant Haven, located in Kanchanaburi. saveelephant.org

Burm & Emily’s Elephant Sanctuary
Volunteers serve both the elephants and community. Feed and bathe the animals, teach English, plant trees and engage with the locals. Stay for three nights to one month in Chiang Mai. bees-elesanctuary.org

Elephant Refuge & Education Centre
Located 160 kilometres from Bangkok, visitors learn about the plight of the centre’s 450+ animals. Short and long-term opportunities are available, but volunteers must commit to a minimum one-week stay. wildlifevolunteer.org

Boon Lott’s Elephant Sanctuary
Guests can spend the night at this small sanctuary near the former Siamese capital of Sukothai. Volunteer activities include feeding, bathing and helping maintain the grounds. blesele.org