You are here: Home/ Articles/ Beyond the Guidebook/ Galapagos: Paradise on the Brink

Galapagos: Paradise on the Brink 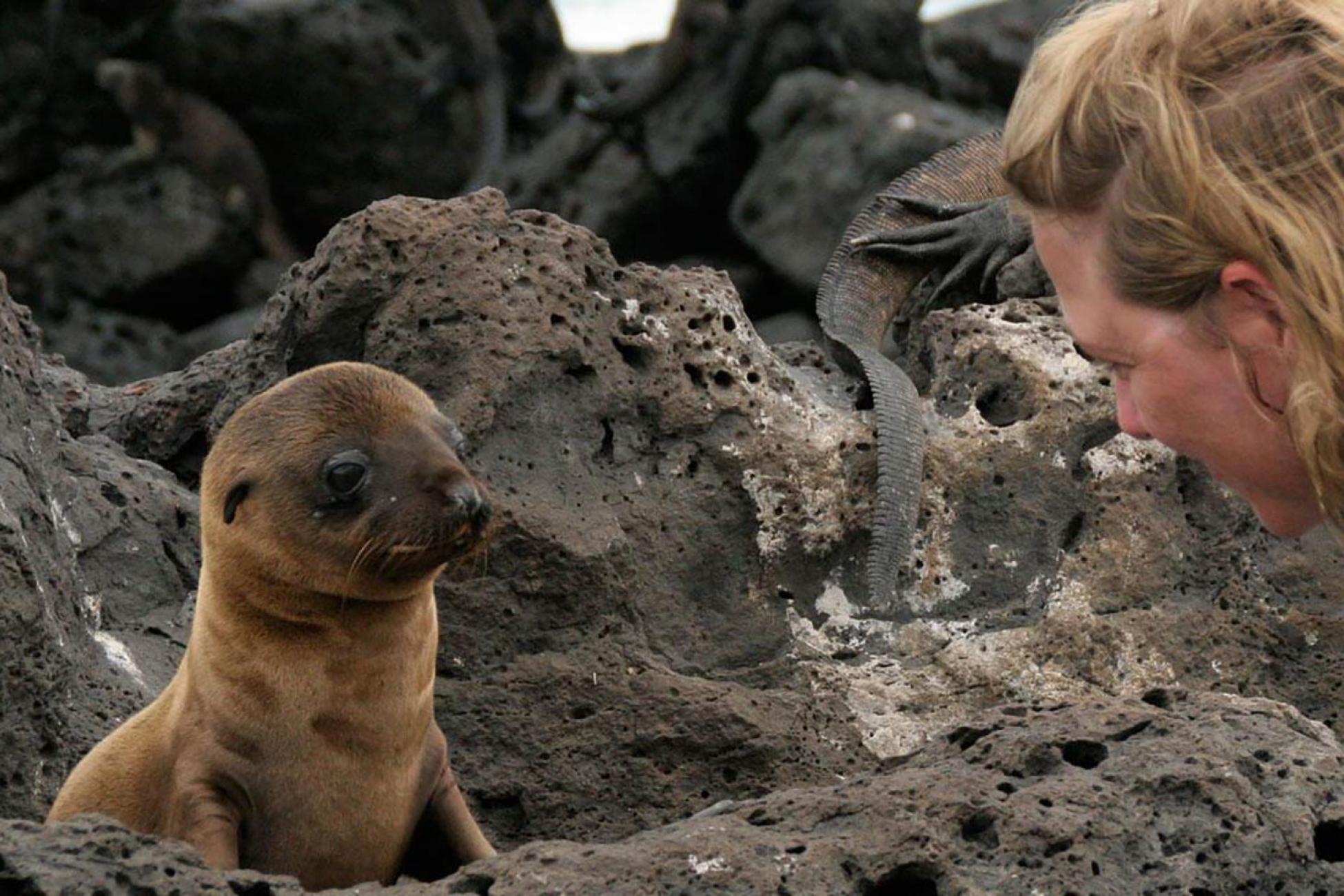 Tourist visits to this fragile ecosystem could soon reach more than a quarter of a million per year. Is it possible for your trip-of-a-lifetime to do more good than harm?

At just past 8 a.m., the harsh morning sun is beating down on our group. Like obedient schoolchildren, we form a semi-circle around our tour guide, Wilo, rapt and hanging on his every word. Nothing can distract us—not even the calls of frigate birds mating in the surrounding incense trees, their wings outstretched and their trademark red gular sacks inflated. Already the novelty of wildlife within our grasp has faded.

It’s a sharp contrast to the day before, when we had first touched down on this five-million-year-old archipelago.

“I don’t know if this is what I was expecting,” said my seatmate, Jill, as the plane taxied down Baltra Island. The airstrip blended seamlessly into the volcanic landscape, which was empty save for low-lying shrubs. “There’s really nothing here.”

It was our first glimpse of the fabled Galapagos, mythologized in our minds by countless nature documentaries and grade school science lessons. The only sign of life, apart from a lone sailboat anchored in the nearby harbour, was the massive iguanas littering the runway. Suddenly, luggage in overhead bins, full bladders and the urgency to exit the plane were forgotten. We gawked excitedly out the window.

This is what we were here for.

But today, as Wilo speaks, it’s easier to ignore the rust-coloured land iguanas perched on rocks less than a foot away from where we stand. After only 24 hours in the islands, we now know there will be more.

“Why do people come to the Galapagos?” asks Wilo.

“Because it’s untouched by people,” says one member of our group.

It’s a common response from tourists who visit the islands, but the truth is that the Galapagos are far from untouched by people. Each year, more than six flights daily bring 170,000 people to visit the Galapagos—exponentially more than the cap of 12,000 that environmentalists recommended in the 1980s.

Although the area was removed from the UNESCO World Heritage in Danger list in 2010, the sheer number of people who visit the Galapagos remains a key conservation challenge. With the continued growth in tourism, the birthplace of the theory of evolution remains precariously on the brink of losing what it’s best known for—its endemic species.

The subtlety of the tourism problem

“Archipelagos are, by their nature, extremely sensitive,” says Johannah Barry, President of Galapagos Conservancy. “If you look at an archipelago like Hawaii in comparison, the Galapagos has done well.”

The “Hawaiianization” of the Galapagos, however, was narrowly avoided. In the early twentieth century, the efforts of settlers to build luxury resorts were thwarted when the islands were declared a protected area in 1936, and later a national park in 1959. By 1978, the Galapagos had been named a World Heritage site, along with the surrounding marine park, which was established in 1998. This, combined with an absence of an aboriginal population and late human colonization, has allowed the islands to maintain 95 per cent of their original biodiversity. And up until recently, isolation and the cost of visiting has prevented the influx of tourists seen by nearby Machu Picchu.

While there is a cap on the number of boats allowed in the Galapagos, there is no cap on the total number of visitors—a number that is expected to soon reach 300,000 per year.

Since its placement on the UNESCO World Heritage in Danger list, the Ecuadorian government has also made significant efforts to reduce the damage tourism was causing to the Galapagos. Today, only around 85 boats are permitted in the marine park at any given time, on strict two-week itineraries that reduce the number of visitor vessels at a site at one time and ensure a lower total carbon footprint.

However, Matt Kareus, Executive Director of the International Galapagos Tour Operators Association, says that this problem isn’t immediately evident to most visitors. “When people hear that there’s uncontrolled tourism to the Galapagos, they have this vision that it’s turning into Cancun—that’s it’s being overrun, that there’s skyscrapers being built on delicate beaches and things like that,” he explains. “Really, it’s a lot more subtle and more complicated than that.”

What do you mean, my impact?

These thoughts are heavy on my mind as I finish up dinner on the boat later that night. Carefully, I ask Jill if she’s given any thought to her own impact in the Galapagos.

“What do you mean?” she asks. She’s caught off-guard by my question. Throughout the week, I receive the same reaction from nearly everyone in our 15-person group—no one seemed to have considered the possibility that they were destroying the very place that we had paid thousands of dollars to visit.

According to Matt Kinch, G Adventures’ regional manager for Ecuador, Galapagos, Colombia and Venezuela, the attitude that I encountered on the boat wasn’t unusual. It’s not until travellers return home that their perspective changes.

“When people hear that there’s uncontrolled tourism to the Galapagos, they have this vision that it’s turning into Cancun—that it’s being overrun.”

“I think what we notice most of the time is that they leave Galapagos with a much higher level of understanding and passion,” says Kinch. “So we often get people coming who later become advocates for conservation in the Galapagos.”

Paradoxically, however, this also means that they become advocates for travel to the Galapagos. And with an increase in demand from visitors comes an increased need for boat crews, supplies and other infrastructure. As we drive through the main roads of Puerto Ayora on our designated shopping day, I realize that the island town looks remarkably similar to the larger cities of the mainland. Lined with tin-roofed houses, the street’s gutters are filled with garbage. Stray dogs roam and the harbour is filled with what appear to be abandoned boats—well, abandoned save for the sea lions that have taken up residence in the cabins.

Since 1970, the population of the Galapagos has grown from 400 residents to more than 30,000 people, who live crammed into just three per cent of the islands' area. Despite the government’s efforts to limit migration, Barry describes this population growth as the “glitch” in Ecuador’s tourism plan for the Galapagos.

Every day, roughly 1,100 crates of food and supplies make the journey from the mainland’s Guayaquil to Puerto Ayora, bringing with them unwanted passengers—invasive species. Since the 1990s, introduced species have increased from 100 to nearly 1,300—including nearly 550 alien insect species and 750 introduced plants. As a result, today more than half of the 3,600 endemic and native terrestrial species are considered vulnerable, endangered or critically endangered.

The challenge of controlling tourism

The situation is little better for the human habitants. Thirty-one per cent of the Galapagos’ residents have difficult meeting their basic needs and in June 2013, Ecuadorian President Rafael Correa said that the islands faced problems with “disorder, a lot of abuse, a lot of anarchy” and a “lack of policies.” In the struggling island communities, corruption and alleged drug smuggling fuel competition for limited tourism dollars. And as the tourism sector continues to grow, so will the number of temporary and illegal immigrants.

This isn’t the only snag. While there is a cap on the number of boats allowed in the Galapagos, there is no cap on the total number of visitors—a number that is estimated will soon reach 300,000 per year. To meet this demand, there has been a growth in land-based tourism—a growth that’s largely been driven by “self-organized tourists” and backpackers. Unlike marine tourism, however, the land tourism industry remains relatively unregulated. Over the last 15 years, the number of hotels has almost doubled, and land-based travel now accounts for 50 per cent of overnight stays.

“There’s really no way to control how many people can just buy a plane ticket to the Galapagos and show up and do whatever they want to do. Those people don’t know if they’re supporting illegal businesses, which in turn, drives the demand for those types of businesses,” says Kareus.

Jim Lutz, founder and president of Vaya Adventures, agrees. “The problem with land-based tourism is that it is an incentive for people to move there,” he says. While he acknowledges that the livelihoods of the island’s residents need to be taken into account, Lutz believes that in addition to raising park fees, that the number of tourists entering the Galapagos should be capped.

But it’s unlikely that a limit will be introduced; tourism has become a necessary evil. The Galapagos generates $418 million annually for Ecuador. In a country where 25 per cent of the population lives below the poverty line, this isn’t small change.

And many—including Barry—believe that tourism is saving the islands, not destroying them. She is referring to the fact that each year the tourism industry contributes between $63 and $150 million directly to the Galapagos’ economy, some of which is funneled toward conservation efforts.

Back on Baltra, our group gathers to say goodbye to Wilo at the airport. Claiming to be the world’s first ecological airport, the new 10,000 square foot facility is substantially larger than its 1,500 square foot predecessor.

Lutz has described this as “one of the great ironies in the history of sustainable tourism.” While the airport, which was built to LEED Gold standards, boasts solar panels, a rainwater recovery system, and natural ventilation and lighting, its main purpose is to allow more people to arrive in the Galapagos.

After checking in for our flight, the sense of foreign isolation from that first day is replaced by active consumerism. People weave in and out of the dozen stores, stocking up on locally produced coffee and sweatshop-produced t-shirts. In one of the gift shops, I spot a book on Justin Bieber.

While tourism may be a powerful tool for conservation, it will always be a business first.

To learn more about volunteer opportunities in the Galapagos, visit www.galapagos.org/travel/voluntourism.