You are here: Home/ Articles/ Beyond the Guidebook/ Beyond Angkor Wat 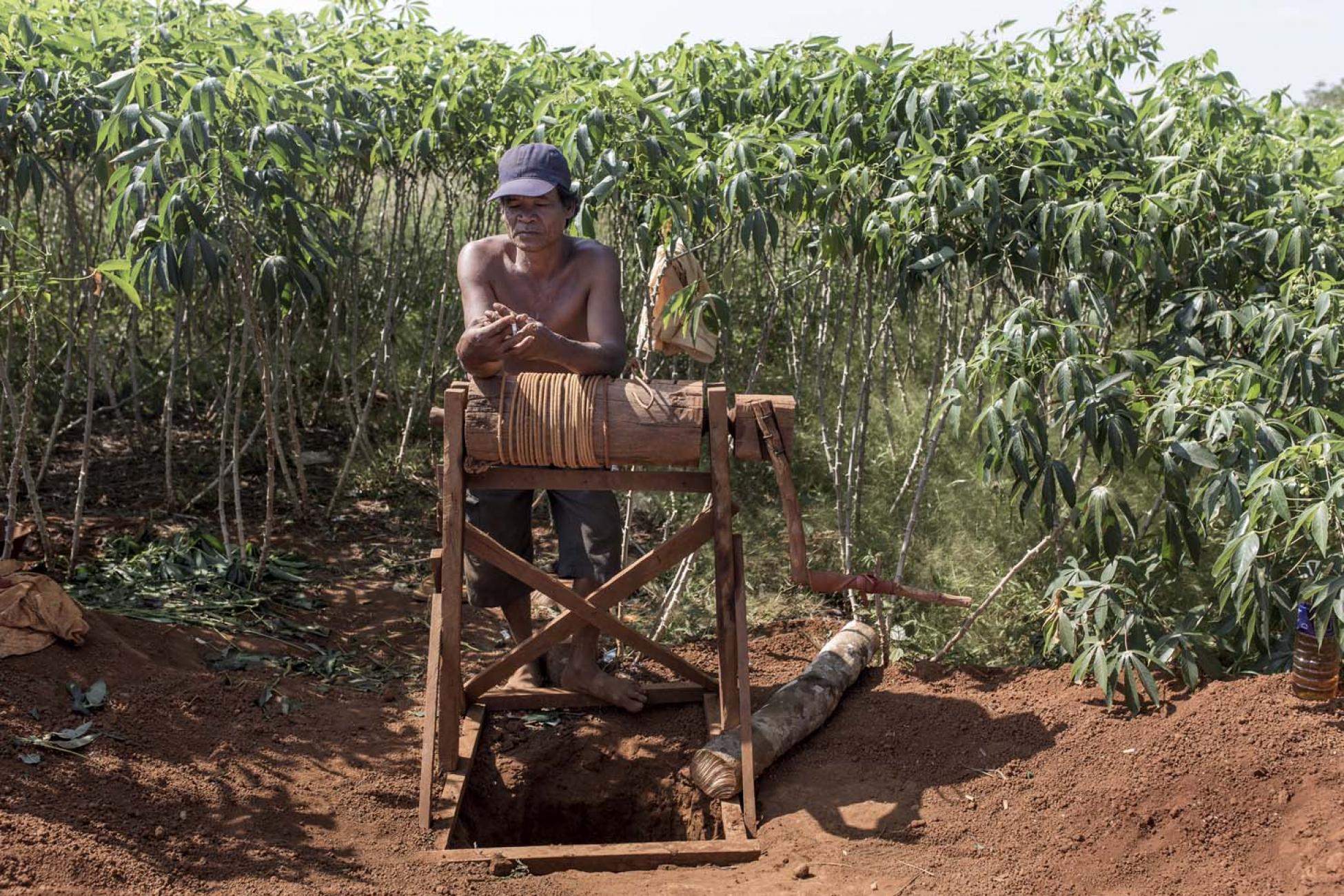 In shoulder-width tunnels four storeys underground, Cambodia's precious stone workers dig for that one gem that will lift them from poverty.

Few travellers make the jarring 650-kilometre trip from Angkor Wat to Ratanakiri. A remote province in the northeast of Cambodia, Ratanakiri is rich in minerals, endowed with lush tropical forests and populated by hill tribe nations.

When travellers do venture here, they are often enticed to buy jewellery made of zircon, a semi-precious stone found in the region. Few realize that it is mined at great risk by adults and children as young as seven.

Approximately 400 men, women and children mine in the Bokeo district, lured by the prospect of finding the one gem that will rescue them from poverty. Known as kamakor tbong (roughly translated as “precious stone workers”), the miners are from Cambodia, Vietnam and the indigenous Tampuan tribe. Propelled by poverty, land evictions and a lack of education, the miners literally carve out an existence by mining. 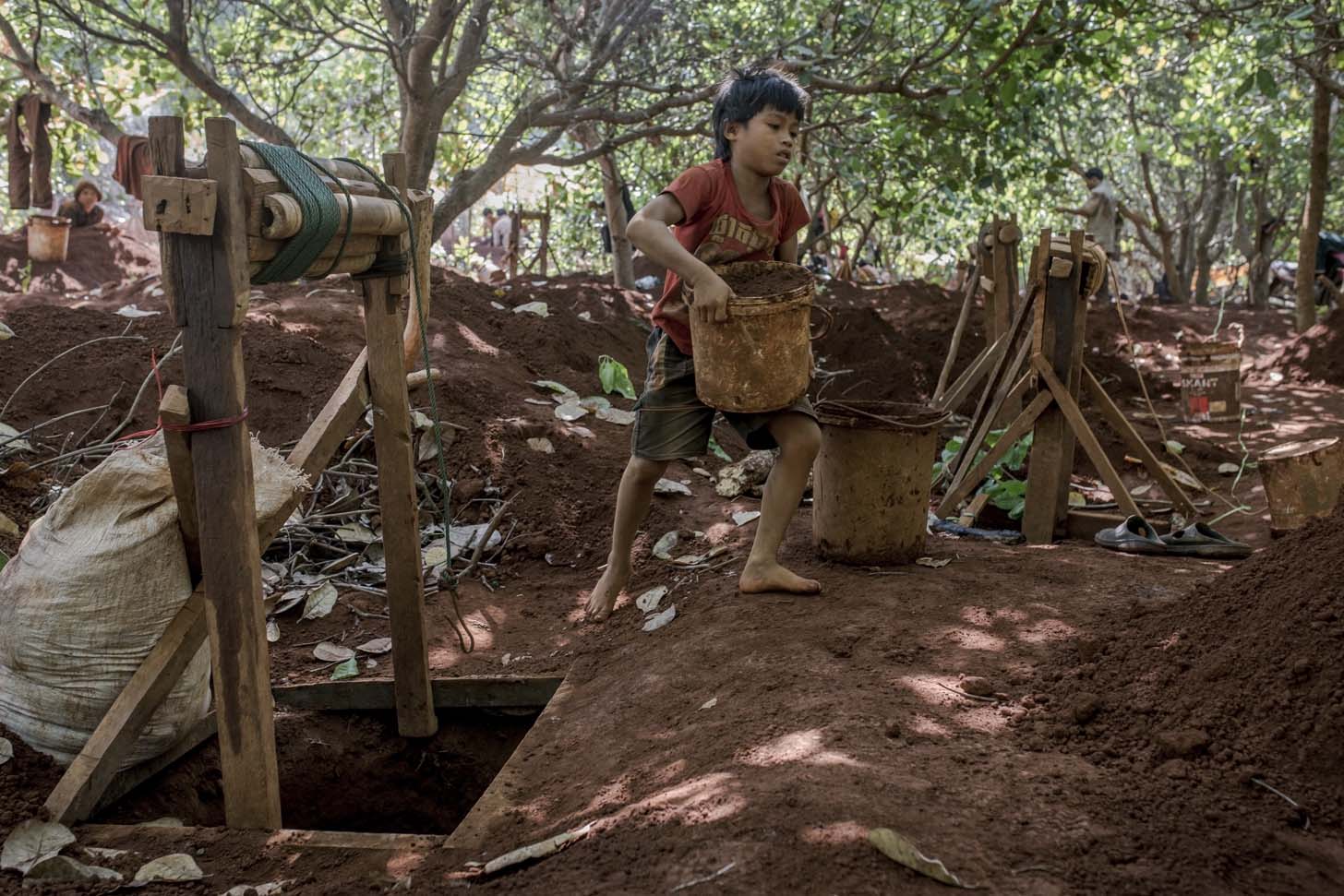 While his 12-year-old friend labours below, Kane, 11, winches a heavy bucket of soil to the surface using a wooden pulley called a rovey. Above ground, the bucket is dumped and its contents sifted meticulously for gems.

Kane started mining in 2012 to support his family, who are members of the Tampuan tribe, one of eight indigenous groups in Ratanakiri. Like many indigenous people, he has never attended school and only speaks his tribal dialect. The lack of a common language not only segregates ethnic minorities from their Cambodian peers, but also serves as a barrier to accessing safe employment. 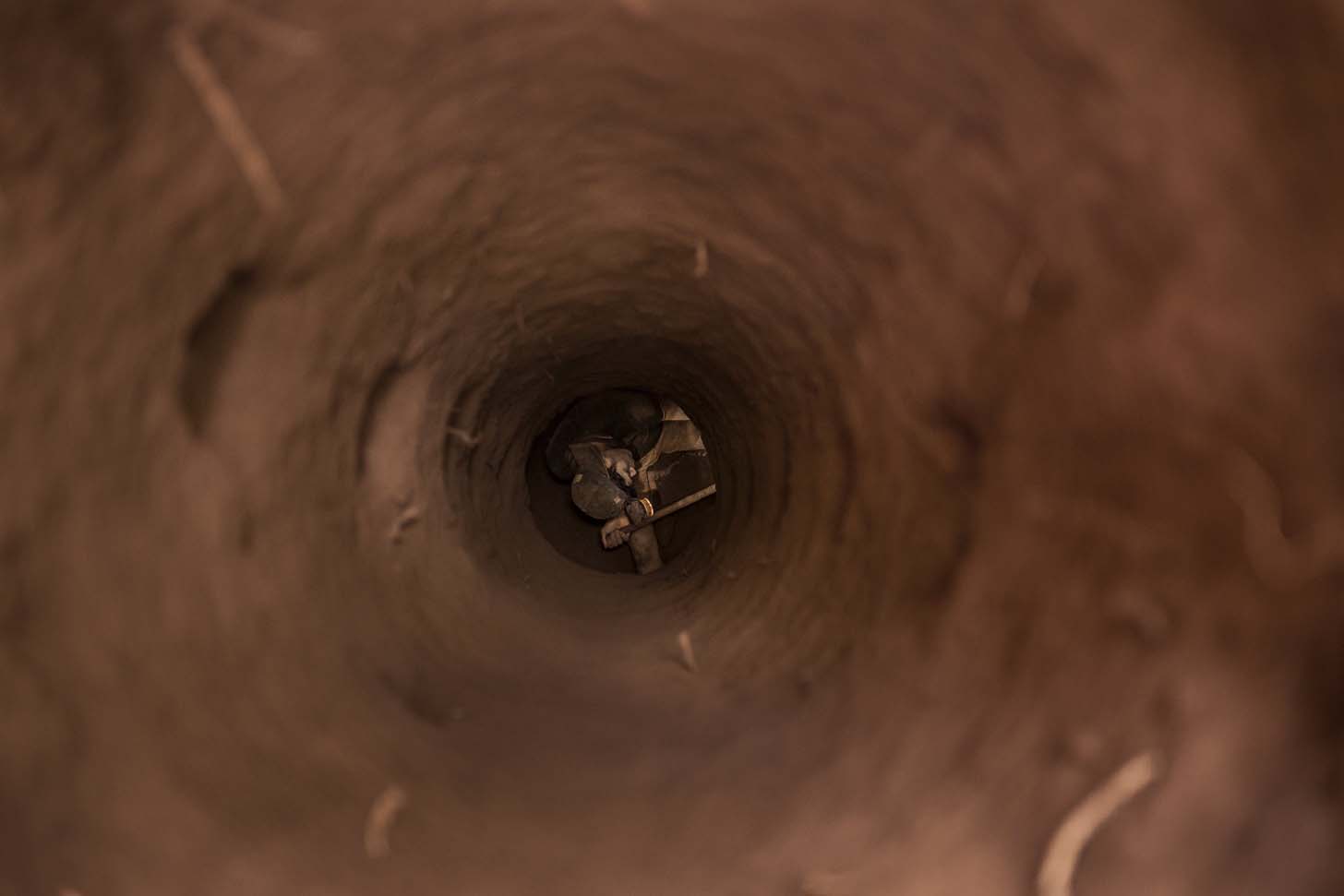 Using iron rods and plastic shovels, miners dig 10 to 12 metres straight down, chiselling footholds in the sides of claustrophobic 60-centimetre-wide shafts. At the bottom, a horizontal tunnel is created, connecting to a second shaft five metres away. A miner spends up to four hours underground, hacking through the hard packed earth and excavating bucket-loads of soil.

Miners are paid only for the gems they unearth, typically earning between $100 and $200 per month. It is not uncommon to go days without finding a quality stone. 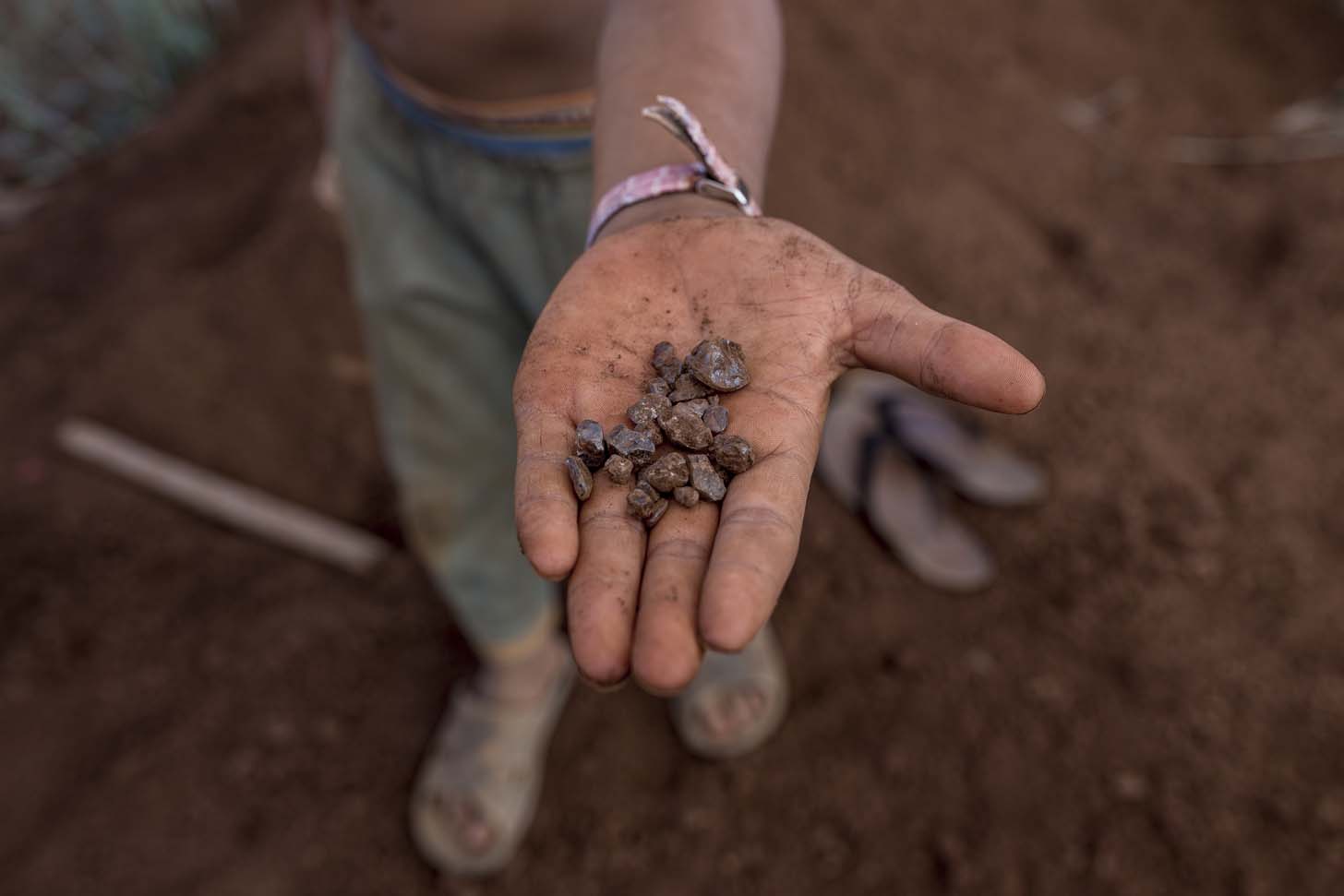 A young kamakor tbong proudly displays his finds. Cambodia has one of the youngest populations in Southeast Asia: 41 per cent of people are under 18. Child and human rights protections are weak. Poor wages, of $100 per month on average, force many young people to seek dangerous jobs in order to survive, including sex tourism and mining. 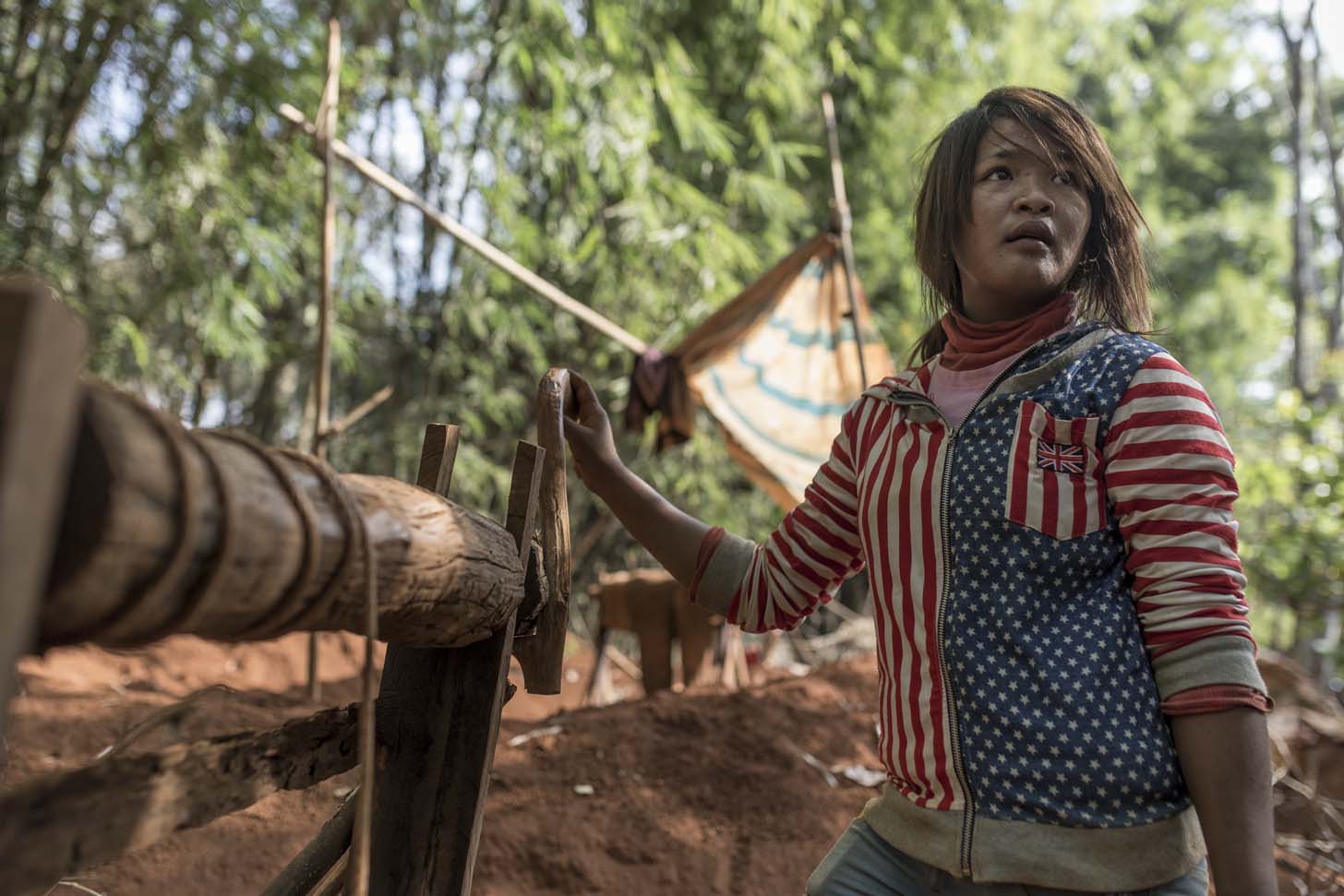 Today, illegal land seizures have emerged as a serious threat to local livelihoods. Over the last two decades, Ratanakiri province has attracted a number of foreign land investors. As a result, hardwood forests are being cut down and replaced by monoculture plantations, as well as logging and mining operations.

Workers like 17-year-old Thi-An, have been forced off their land by illegal logging and mining activities. Thi-An’s family once survived off their land by migrating throughout the territory—a common indigenous practice. With the rise of land evictions, they came to the mines in hopes of starting a new life. However, there are no resources or support services in the area to help families who have been displaced by illegal land-grabbing. 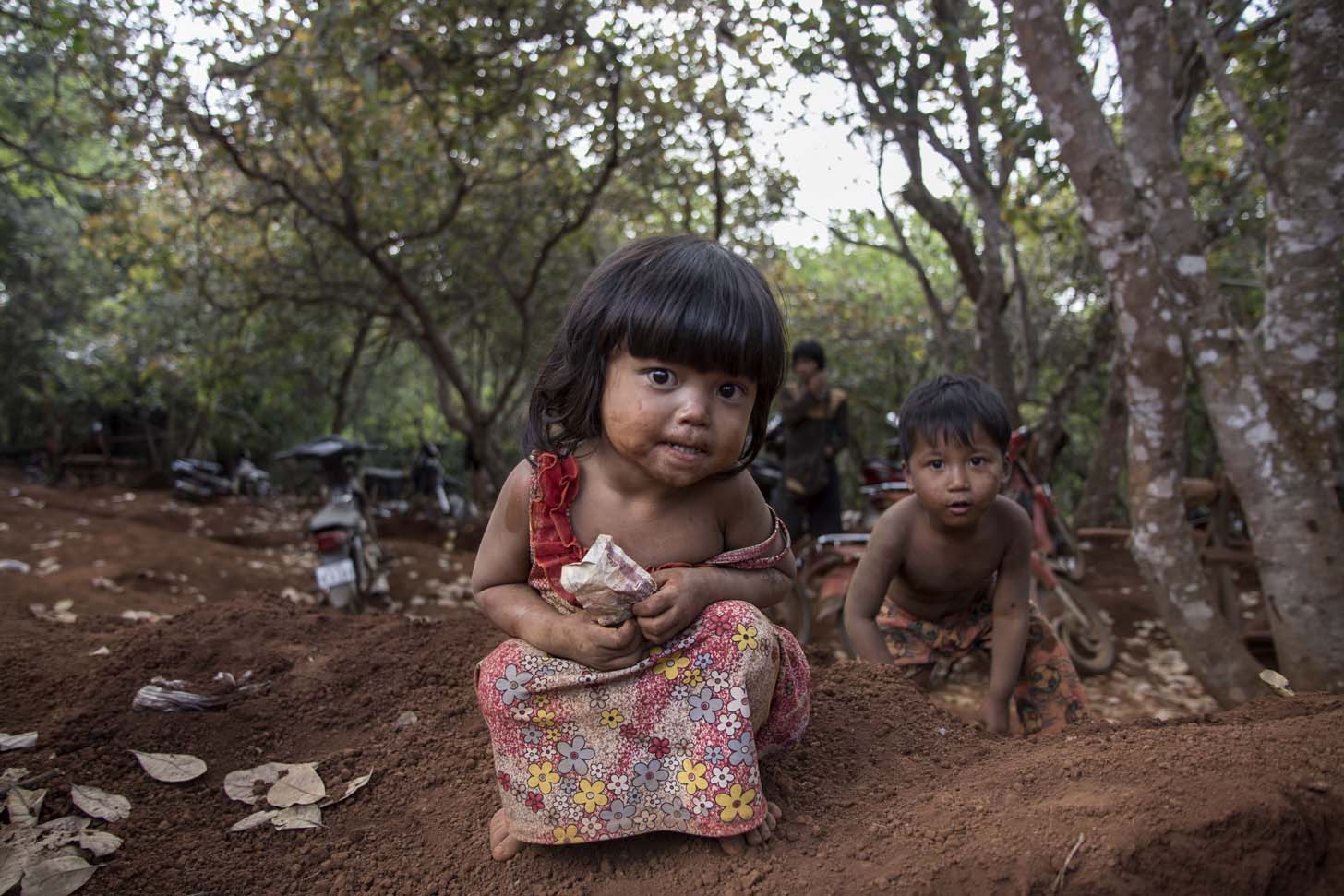 Toddlers do not descend into the mines, but they can be found filling abandoned shafts or helping their parents clear the land. Here, a little girl clutches 500 riel (about 12 cents) for doing her share. Many of the people in the region have been working these small-scale mines for more than two decades, setting the stage for their children to do the same. 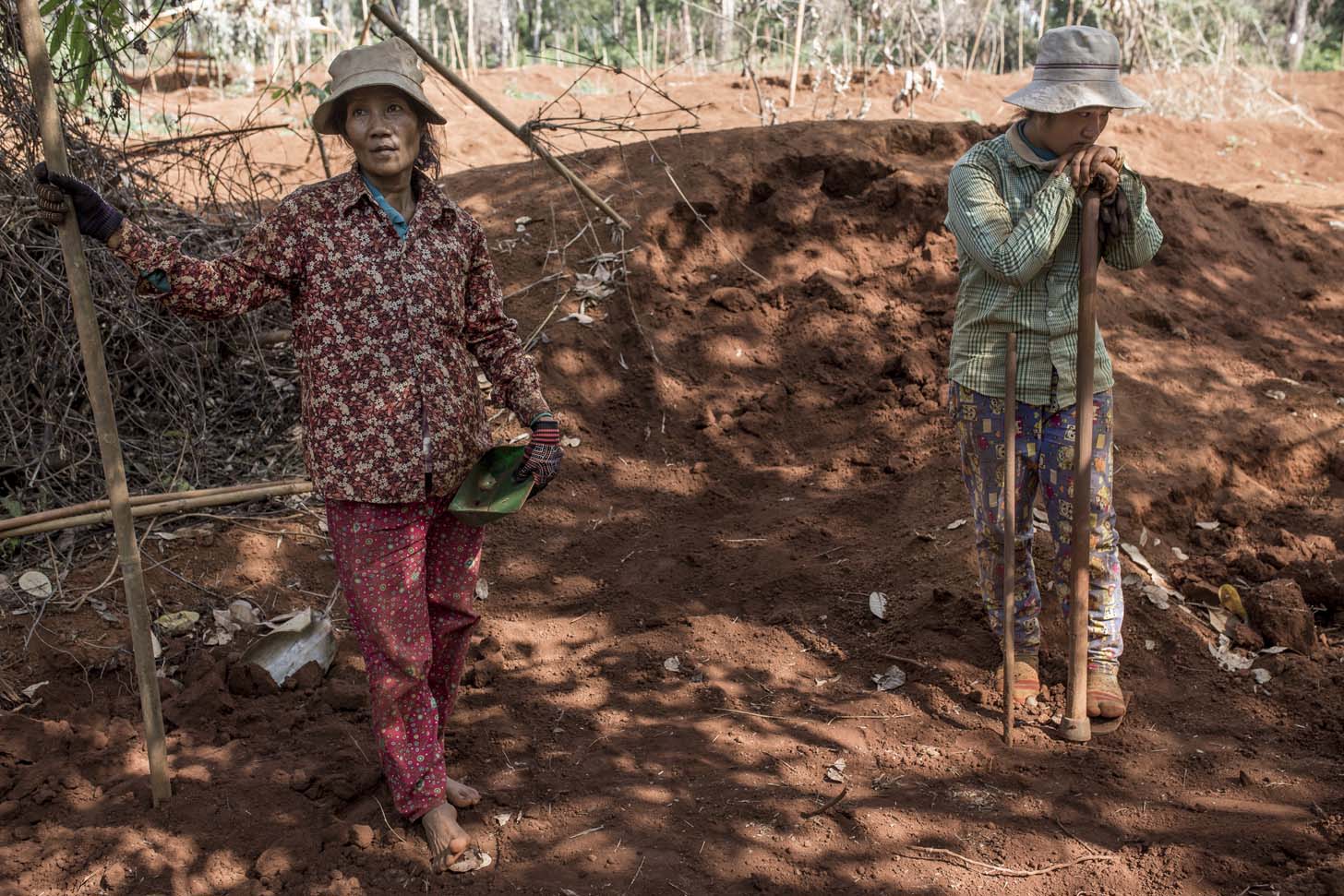 Hen-Ny dreams of a different future for her 17-year-old daughter, Hen-Phanny. “I have worked here for 20 years. My daughter has worked the mines since she was 12. We are a family of eight women who have never been to school. What choice do we have? I would like to send Hen-Phanny to school. This is my dream but we have no money.” 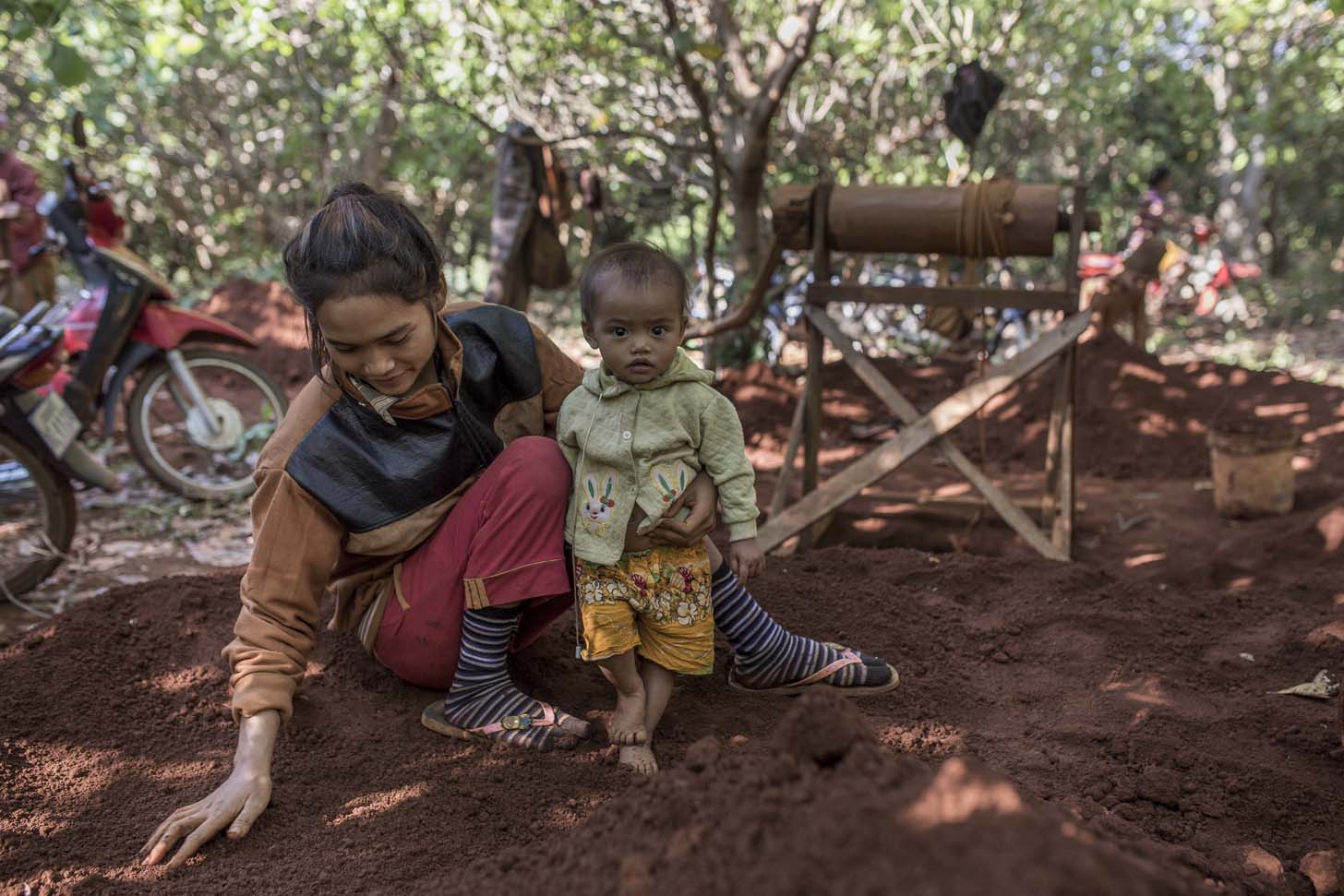 Ha-Chang clutches her 11-month-old daughter, Ha-Nita, as she sifts through the dark dry soil in search of zircon. “I left school in grade five to work in the rice fields to support my family,” the young mother says. “Now I work alongside my husband and make up to $100 a month for the gems we find. Mining pays more than farming. We can work for nearly the whole year, while rice farming is seasonal. But I worry for my daughter. I cannot afford to take her to the doctor or buy her medicine.”

Ratanakiri has the highest rate of maternal and child mortality in Cambodia; 23 per cent of children die before they reach the age of five. The province also has the country’s highest rate of severe malnutrition amongst women and children. 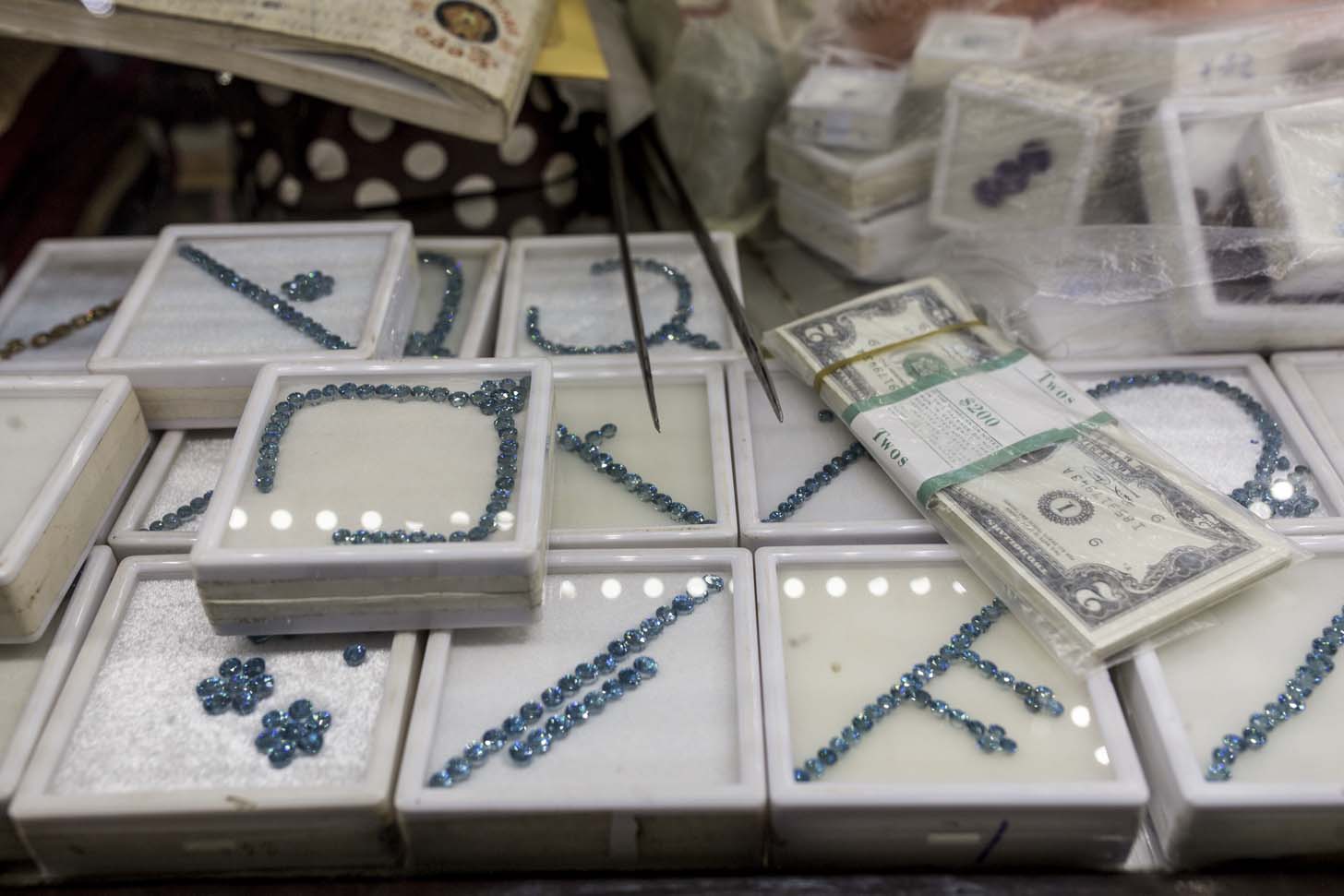 Gem mining is a lucrative and highly controlled business in Cambodia. In the town of Bokeo, gems are sold, cut and set in elaborate jewellery arrangements that sell for thousands of dollars. Yet, a kamakor tbong will only ever receive a maximum of $5 a stone. 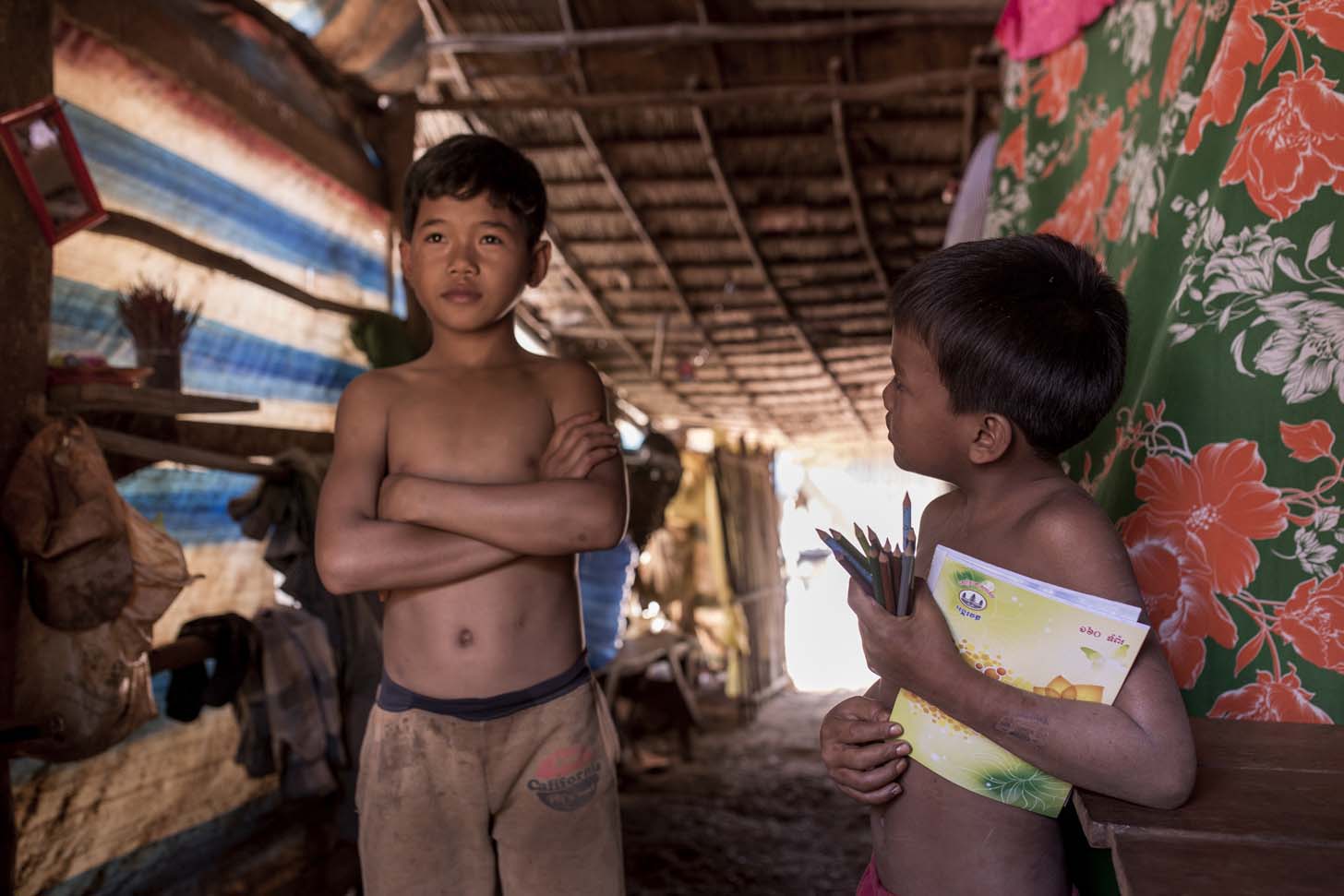 Ly Kimheng, 13, is luckier than most. When not searching for gems, he attends school part-time—a rare luxury for a young kamakor tbong. Part of his monthly earnings goes towards paying for books and school supplies. “I am scared,” he admits. “Every year people die from landslides.”

Last November, five of his peers were killed after the mines they were working in collapsed. One boy trying to climb out lost his footing, fell backwards and was found impaled on his mining rod.

“We have no choice, this is the future,” says Ly Kimheng. “For me I have no dreams.”

This photo essay originally appeared in the Fall 2014 issue of Verge.