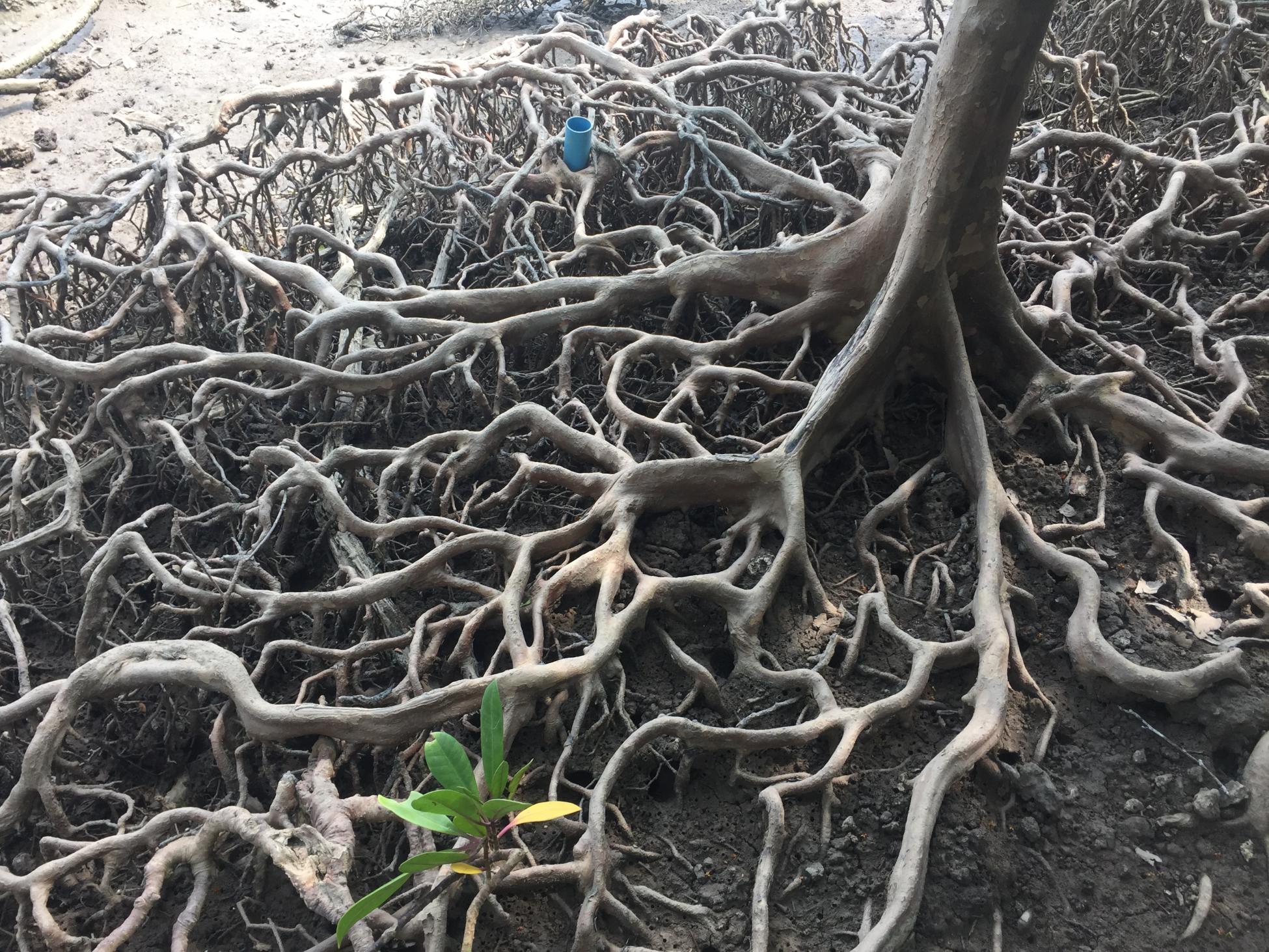 From the classroom to the mangrove forest, Emma's year in Thailand is taking an interesting turn.

The mud of the riverbank was soft and warm as it squished between my toes. The boots, which I had foolishly thought would keep me dry, lay discarded under a nearby palm tree, soaked and defeated by the southern Thai rainstorm that raged down upon us. Around me, the sound of digging shovels, mixed with laughter and raindrops as we approached the end of our work day.

I looked around at the progress made, noting that the wall separating the two segments of water was still intact, but another day or two of work just might be enough to connect the two segments. I glanced over and saw Sutee Pankwan, working hard, and like all of us, completely soaked.

I was on the bank of an abandoned shrimp pond in Nai Nang village working as an intern for Mangrove Action Project (MAP). As part of my Fulbright Grant, we have two months of vacation—one to pursuit an internship in Thailand of our choosing and another to travel. As an environmentalist, and someone who loves coastal ecosystems, I chose to intern at MAP for the month. MAP is a registered American NGO, but it has its regional office in Trang Thailand, and has been working for 20 years to partners with local communities, NGOs and researchers to conserve and restore mangrove forests.

In 2014, after their restoration efforts failed, the villagers of Nai Nang reached out to MAP for support to restore mangrove forest in abandoned shrimp pond along a tidal river. That day, we were working to improve the hydrology of the site by connecting the pond to the river so that the mangroves could naturally restore the area over time. Unfortunately, it has started to downpour in the middle of our work session, and we were soon completely soaked. However, the villagers of Nai Nang kept working with smiles and a spirit that refused to be broken.

"It is like having a tree with no roots, for the mangroves are the roots of the sea.”

Mangroves are some of the most significant, and most threatened ecosystems in the world. In addition to harbouring an immense amount of biodiversity, mangroves also act as barriers against coastal storms, prevent soil erosion and runoff, are major carbon sinks, filter water and are the very basis for the detrital food chain. In fact, it is estimated that about 75 per cent of tropical fish and crustaceans spend their juvenile years in mangrove forests. As said by a fisherman of the Andaman sea, “If there are no mangrove forests, then the sea will have no meaning. It is like having a tree with no roots, for the mangroves are the roots of the sea.”

However, this ecosystem is in danger. According to World’s Resources Institute, from 2000-2012 Asia lost over 250,000 hectares of mangroves, and recent projections show that this degradation is continuing. Destroyed by mostly human caused interference including logging, shrimp aquaculture, tourism and urbanization, mangroves are facing many hardships and are disappearing at an astonishing rate. As weather patterns become more unpredictable and climate continues to drastically change, the time to save mangrove forests is upon us.

It will take many active voices and initiatives to save mangrove forests, but organizations like Mangrove Action Project (MAP) prove that there is still hope for the future of mangroves and coastal communities in Thailand. Currently, MAP has 13 active projects dispersed between the provinces of Karbi, Ranong, Phang Nga, and Trang, and it promotes community-based sustainable management of mangrove areas.

In addition to providing training and support to begin and continue the restoration project into the future, MAP also helped the villagers pursue an alternative livelihood incorporating the mangrove forest. The villagers expressed an interest in apiculture, as many of the villagers had started learning how to keep bees. MAP helped coordinate an apiculture and marketing training, as well as the materials to build bee boxes. Now, the apiculture group of Nai Nang sells their honey and honey-infused soaps to visitors, local stores and even the Marriott hotel. In 2015, they produced over 270 kilos of honey created partly with the pollination of mangrove flowers, donating 10 per cent of their profits to the village conservation fund; a fund that continues to grow as their profits and mangrove area expand. The Nai Nang apiculture group proves that livelihoods and caring for the environment aren’t mutually exclusive, and make a pretty sweet connection.

As an intern, I have had the opportunity to visit and conduct research on five different sites, assist in office work, and learn about the various issues and complexities affecting mangrove forests in Thailand. MAP’s approach incorporates the community as the first step in restoration, something that I've witnessed personally. From batik-making with natural mangrove dyes, to creating mangrove nature trails and centres, MAP is aiding to educate and empower coastal communities.

As the day came to an end, the rain began to slow. I carried a bucket of excavated wet dirt to the side of the newly forming trench. Suddenly I heard calls of “Tyroo, Tyroo,” (Picture! Picture!), and returned to the group of villagers smiling and beckoning me into their group shot.

As the shutter clicked, I tried to capture along with the picture, the feeling of the day; the mix of tiredness, cold shivers, and satisfaction. I was aware that there was more to be done, but happy with what we had accomplished. The fight to protect mangrove forests is just starting, but even amid the storm of obstacles there are people who are ready and willing to fight. 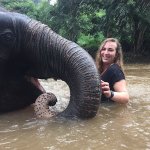 Emma McDowell fell in love with the study of culture and language when she worked as an au pair in Madrid, Spain. She then double majored in Spanish and Hispanic Studies, and Environmental Studies and minored in Anthropology in university. She has lived and worked in Spain, Costa Rica, Guatemala, and is currently completing a US Fulbright Grant in Nahkorn Si Tammarat, Thailand.