Greg is ready to start the best job in the world in South Australia. The only problem? Tuberculosis.

As a Canadian citizen I always figured it would be relatively easy to obtain my Australian Working Holiday Visa. I am under 30, in good health, no criminal record and overall, have the desire to pack up and move to the Land Down Unda for at least a year.

I had heard from a number of people how easy it is to get the Aussie Working Holiday Visa. You simply fill out the form online, which takes about 10 minutes. Within 24 hours you usually receive a response that’s usually an overwhelming “yes.” Literally every Canadian I have ever met who has worked in Aus has never been denied a visa.

So you could understand how nervous I was when my first online attempt was declined, despite the fact that I had just won the “Best Job in the World” contest held by Tourism Australia two months prior. Huh, okay, where do I go from here?

Again, the Working Holiday Visa application is relatively easy (follow the link above for more info). Where I went wrong was the question “Where have you lived or spent a period of longer than three months in the last five years?” Ouch, answering this as a professional traveller is a hard cookie to crew. I actually had to really think about it and came up with Argentina, Aruba, Ecuador, Tanzania, Canada and Costa Rica. It turns out that Tanzania (and probably anywhere in Africa) raises an immediate red flag with the online visa system, the reply I received was:

“As you have spent more than three consecutive months in the last year years in Tanzania, which is listed as a country of higher risk in terms of tuberculosis, a chest x-ray examination is required to determine if you meet the health requirement for the grant of an Australian temporary visa.”

So getting tested for tuberculosis was a new one. At the time I was in northern Brazil about to cross the Amazon headed for a very remote part of South America where Brazil meets French Guiana (Google map it). It was truly a mission that could easily turn into a couple days. First things first, Australia asked for a doctor’s note from an Aussie-certified radiologist. They supplied me with a list and my heart started racing; I knew that if there were any Aussie-certified docs in Brazil they would be in Rio, Sao Paulo or Brasilia—each of which I was over a 40-hour bus journey from. Great. So with apprehension, I opened the list and clicked on Brazil. It opened an additional list in alphabetical order and what do you know, the very first one was one doctor located in Belem. Amazing! Let the mission begin.

I called the doctor and was glad to hear that he knew how to go about getting the right documentation to send to the Australian Embassy in Brasilia. I made an appointment to visit him the next morning. All he needed was my passport number and 200 Brazilian Reais (about 105 AUD) cash.

The next morning began one of the longer but more productive days I ever spent in Brazil. I had made the appointment first thing in the morning thinking I could get the chest x-ray (TB Test) and all necessary documents completed in one morning. Nope. Turns out that Dr. Saul (not his actual name) was just the middleman—the one authorized to authorize the results of the chest x-ray and general physical. Okay, so where to next?

The doc gave me a couple different clinics to visit each with specific instructions all adding to my already 200 Reais bill. Still it was relatively early and I set off on foot. At the first clinic I waited for about a half hour to be seen (which in Latin America is really good). The nurse took and blood test and a urine test and measured my breathing, wrote some stuff down and asked me to come back in two hours. Awesome that was easy, onto the next one.

From the general clinic I headed to a hospital to see another radiologist who I had been referred to by Dr. Saul. I entered to a gong show; it was packed. After finally making the reception and explaining my situation in broken Portuguese I was answered with a swift no; it was impossible to get the x-ray and result in one day especially now that it was almost noon. I pleaded, explaining that I had booked a boat to cross the Amazon the next morning and only had a few precious hours to get the chest x-ray and results. There is a saying in Bolivia that pretty well works for all of Latin America: “Nada es seguro pero todo es possible. Nothing is for sure, but everything is possible.” This was exactly the case. After hearing my plea the nurse consulted the doctor and after a quick meeting he agreed to give me the x-ray that afternoon.

I waited two hours in the overcrowed room basically twiddling my thumbs and flicking through Brazilian magazines. After what felt like a lifetime I saw the doctor at the door and he motioned for me to follow him. Thirty minutes later I was leaving with the promise that the results would be ready for pick-up at four that afternoon. Since Dr. Saul was going to close up shop for the day at 5 pm, I knew it would be tight timing.

I left the hospital and headed back to the general clinic to pick up my earlier test results. I paid the bill and left a little lighter in the pocket and heavier in the hands with paperwork. I headed back to Dr. Saul’s office just to let him know I was on track and almost had his documents in order. He agreed to wait for me until exactly 5, but after that it would have to be the next day. All my Aussie Working Holiday dreams were slowly coming to fruition, or at least I thought so.

Running back to the hospital I arrived at exactly 4pm to the news that my results were not processed. I explained again the necessity and was pointed towards the lovely waiting room once again. Feeling slightly defeated and tired of missioning around Belem for a good eight hours, I gave in and took a seat figuring I would turn this into a two-day mission. Nope. The doctor emerged from the mysterious haunts of the central hospital with a giant envelope and motioned for me to join the reception. After again paying another semi-substantial bill (Canadians aren’t used to paying for medical attention) I took the results and again found myself running to Dr. Saul’s office. I swear I arrived slightly breathless just as he and his secretary were walking out. They weren’t overly excited to see me, by any means.

A half hour later I had a giant envelope ready to be mailed to the Australian Embassy in Brasilia. Of course I should never have assumed that Dr. Saul would ever take on the responsibility of mailing it himself, no way. He sent me on yet another mission to the federal Brazilian post to send it again on my own dime—and to make things better, the post office closed at 6pm and I only had 15 minutes to get there. Go!

Grabbing a cab I followed the doc’s instructions to the nearest post office and again caught them just as they were leaving. I ran in and quickly explained the situation. Twenty minutes later my tuberculosis test results were on route to the Australian Embassy. (I also bought insurance as most things mailed publically in Brazil only have about a 60 per cent chance of actually making their destination.)

Long story short, I figured I would hear something by email about the documents being received and continued travelling. The next three weeks took me through some very remote country, (all documented on my website) with some incredible experiences. Over that time I thought often about the visa and started to get nervous as there was absolutely no news of the package ever being received. Time to do something, I had a confirmed job after all and it was starting to get close to the departure date for Aus.

I emailed Dr. Saul and the Australian Embassy in Brasilia each asking for just a quick update on my visa application. Nothing, I again heard nothing for another week. At that point it had been just over a month since my original application and I had not heard anything since the original rejection. This did not make me feel comfortable by any means, especially when everyone around me was getting theirs so quickly and effortlessly. Once I made it to Venezuela I finally had a bit more reliable connection to the net and decided I was going to make a phone call to the embassy that day.

Do you believe in fate? I’m pretty certain I do, it is hard to just believe in coincidence. The day I went to call the embassy I open my email to a message stated:

This is to advise that you have been granted a Working Holiday Visa, Subclass 417, on 05 September, 2013.

(Also turns out I never had tuberculosis. Nice!)

Have you ever worked in Australia or have another great visa story? This is my best so far. 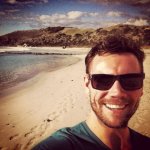 Greg Snell is a traveller who lives for the moment and dreams of the future. He relishes in the experience and believes that the greatest parts of life are the people you meet, the places you see and the friendships you create. Winner of South Australia's "Best Jobs" competition, Greg is currently working as a "Wildlife Caretaker" on Kangaroo Island, South Australia.