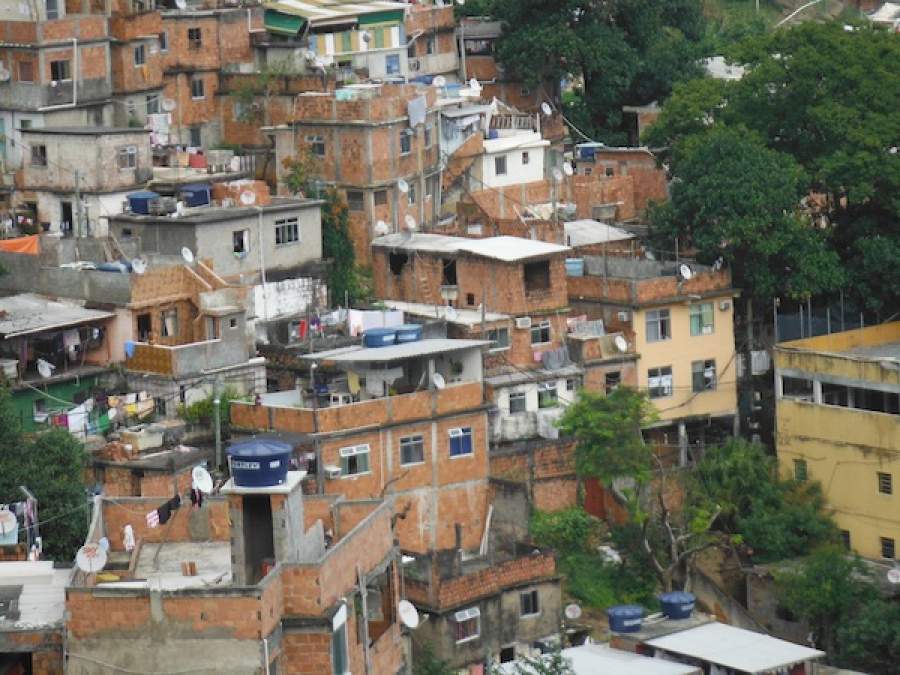 Rocinha, a favela in Rio de Janeiro.
By  Rob Small

Rob visits the favellas of Brazil for an eye-opening experience.

As my time in Brazil came to an end, I found myself venturing to Rio de Janeiro, A Cidade Maravilhosa. Taking that trip turned out to be an incredible way to spend my final weekend in Brazil. Between losing breath in between all of the sights Rio has to offer and meeting people from all over the world, the only thing that could have made the experience more amazing was spending more time there. The city has the world's largest inner-city rainforest and is built in between towering mountains of granite. The views of Rio from Pao de Acucar and O Cristo Redentor are mind blowing and the beaches are serene. Despite all of this, nothing was more fascinating than the winding alleys and total improvisation of Rocinha, Rio's most populous favela.

Started by families coming to Rio looking for opportunities in difficult times, Rocinha was totally unplanned and built ground up by the people who reside there. The unfinished redbrick houses that distinguish Brazilian favelas pave the mountainside. Often within feet of each other, the roofs of the houses sold, like a plot of land, for someone to build their house on top. The total lack of planning results in buildings scattered everywhere, most often with no addresses and sometimes within several feet of the closest home.

This random building pattern is all part of a “build first, think later” mentality. While some houses have their doorsteps right on the alleys/streets of Rocinha, others have had to construct elaborate staircases or branching paths just to reach their houses. Similarly, wiring in the favelas is done without a plan. Hundreds of wires hang just above head-level throughout the streets, providing electricity and telephone services to the residents of Rocinha.

Despite all of these irregularities, the spirit of the people in Rocinha cannot be mistaken. Our tour group received numerous warnings about children asking for money, but all we encountered were children who wanted to give hugs and high-fives to foreigners. The first five minutes were awkward as it is a little strange to be seeing a place where people live. However, in Rocinha at least, there appears to be a general acknowledgment about the significance of the favelas and the awareness that is raised by having foreigners tour them. The upbeat attitude of the residents, specifically the children, was the total opposite of what we expected to find in the favelas. With the sounds of samba music filling some of the streets Rocinha displayed some roots of Brazilian culture for which the favelas are famous.

On my next trip back to Rio—and that is something I really hope will happen—I will without a doubt do another tour of Rocinha. Surely the shock of this totally different lifestyle blinded me of some things for parts of the tour. While the living conditions are poor and there is garbage everywhere, the spirit of the favelas brightens everything around it. The make-do attitudes and happiness of those who live there, especially the children, leaves everyone visits inspired and searching for something more than the material happiness we prize so much.

Rob Small is an international relations graduate of Carleton University. An AIESEC intern, he is working as an English teacher at a local language school in Chapecό, Brazil. His first time living abroad, he hopes to share insightful, yet entertaining, stories about being a Canadian in Brazil.