You are here: Home/ Articles/ Work Abroad/ Blogs/ A Road Trip Across Poland from Krakow to Koszalin

A Road Trip Across Poland from Krakow to Koszalin 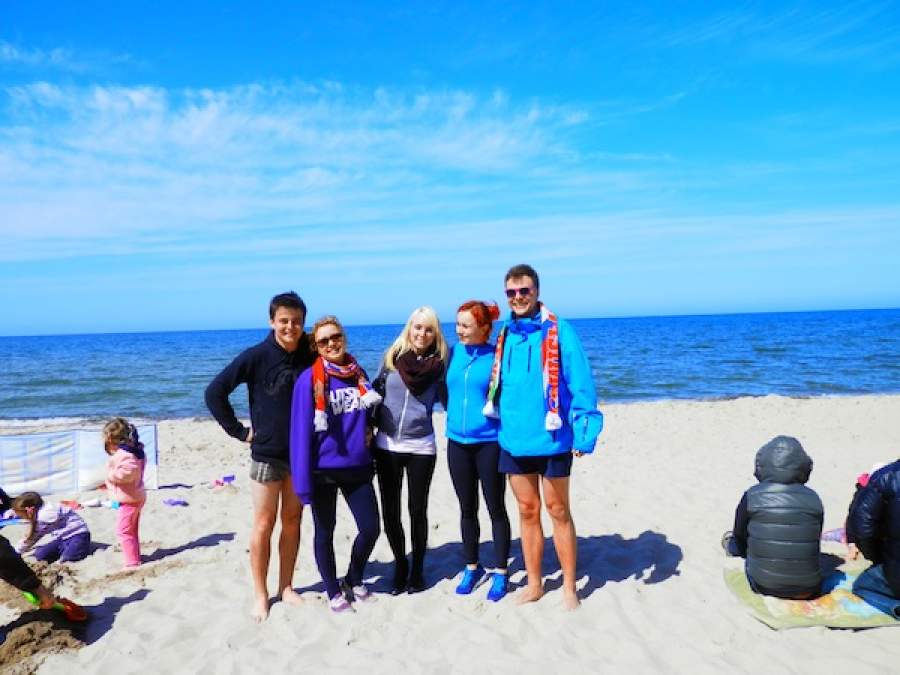 Amber, centre, stands with friends during her road trip across Poland.
By  Amber Birch

Amber learns that sometimes, last-minute decisions are the best decisions.

While being abroad, my main goal was to become more spontaneous since before in Canada I clung to routine like it was a lifeline. The unknown is such a petrifying factor in my life. Like most people, I was inept to adjusting to change and even more afraid of experiencing unfamiliar ground in life. I was stuck in my schedule, I was too scared to break free and live how I wanted to.

Travelling to Turkey helped with my major social anxieties like shyness and accepting change— but I still got into the habit of routine in Turkey. I then had to decide to return to Canada like scheduled or choose another path. I felt like I had not experienced enough and had not changed my own issues that I had sought to. To return, I felt like I would leave a journey halfway completed. I was offered an amazing Global Internship Program (GIP) with AIESEC in Krakow, Poland and I decided in a couple weeks to change my course and move onto another adventure.

I came to Poland with little expectations of the country because I didn’t know much about my next destination other than the people were known for being friendly and that they enjoyed vodka more than the average person. Both things I learned to be true but both to my delightful surprise is how much I would come to adore this country and all that it had to offer. First off, to say Polish people are kind would be an insult to the Polish people I have met—Polish people are beyond warm, friendly and open to nervous shy newbie Canadians. The people I met opened their lives to me when I traveled here alone and knew no one. I am forever in debt to the people I met here for everything that they have given me. I moved outside of my comfort zone here and let go of all the routine and structure that had held me together for years of my life and it was liberating.

During my first couple weeks in Poland, there was a holiday where I wouldn’t come to work for five days and of course, I found out the day before the holiday started. As I returned to an empty dorm, as most students had left for home or mini travels around Europe, I went to my room to contemplate how to spend the next couple days. As a friend walked into my room and said, “We are leaving in 15 minutes for the Baltic Sea if you want to join us.” The stickler inside of me said many things like it was too short notice, or this isn’t a good idea there isn’t a plan! Then I realized that it was time to let go of it all and just go with life as it came at you. Thus began our 15-hour road trip across Poland.

Like I have learned from all Polish people, all events need to have beer and vodka involved to be handled correctly. We packed snacks and then went to pick up some beer and vodka for our long road travels ahead (there was no drinking and driving experienced on this driving journey). We drove for 15 hours straight with the occasional stop to stretch our legs. We had one unfortunate stop that derailed our plans for a couple hours. We had stopped for a break when one friend decided to run across the street and steal a Polish flag, again my Canadian “follow the law” feelings seeped in but we continued on our journey and a short while later we were pulled over by the police to be questioned about our car being seen after the theft. I panicked thinking that we were all in serious trouble. We were brought into the station to show our identities and have the driver accept the fine. I of course, think this is very serious while my friends are laughing and the police are laughing as this is all a funny situation for everyone. Near the end, the police officer asked my friend in Polish, “Why does the Canadian girl look so frightened?” I realized I needed to relax and really force myself to go with the flow.

As we continued on to finally get closer to the Baltic Sea, I fell asleep only to be woken by a strange man getting into the car beside me. As I wanted to freak out but everyone else in the car seemed calmed and to talk to him, I assumed he was a friend of someone in the car. I tried to relax around this stranger we picked up in the middle of nowhere. I realized after 30 minutes and us dropping him off in the next town that this was in fact a hitchhiker that they had picked up. I nervously asked my friend to confirm my suspicions, and was calmly responded with a yes it was. I could not believe we picked up a hitchhiker, all I could think was this was highly illegal and never mind he could have killed us all—but that again is North American thinking. I have now learned that hitchhiking is common in Europe and some people like to travel Europe that way to save costs. These are the moments I realize how far away from home I am.

We finally arrived in a small village near the Baltic Sea; we dropped off our things at their friend’s home and went immediately to where we had all been waiting for. We got to drive through a glorious meadow that had windmills and flowing grass, the ideals of what I imagine rural Europe to look like. It was all like a dream come true. We arrived at the Sea and it was stunning. Of course it was chilling and cold to experience even with the sunshine but it was one of the most beautiful beaches I have ever been to that just stretched on as far as I could see. The sand was soft and the water clear, the Baltic Sea should be more seen as a resort area, well of course minus the freezing cold.

We returned to the village to enjoy some barbecued sausages and vodka; a perfect Polish day. It ended with what might have been the most magnificent countryside sunset I will ever see. I realized it paid a little to let go and be spontaneous, if I had never made that quick decision, I would have never experienced what traveling should be and is. It is just experiencing life.

Amber is a fourth-year marketing student from Vancouver, Canada. Amber is currently living abroad for her second internship with AIESEC in Krakow, Poland after finishing her first match with AIESEC Istanbul.