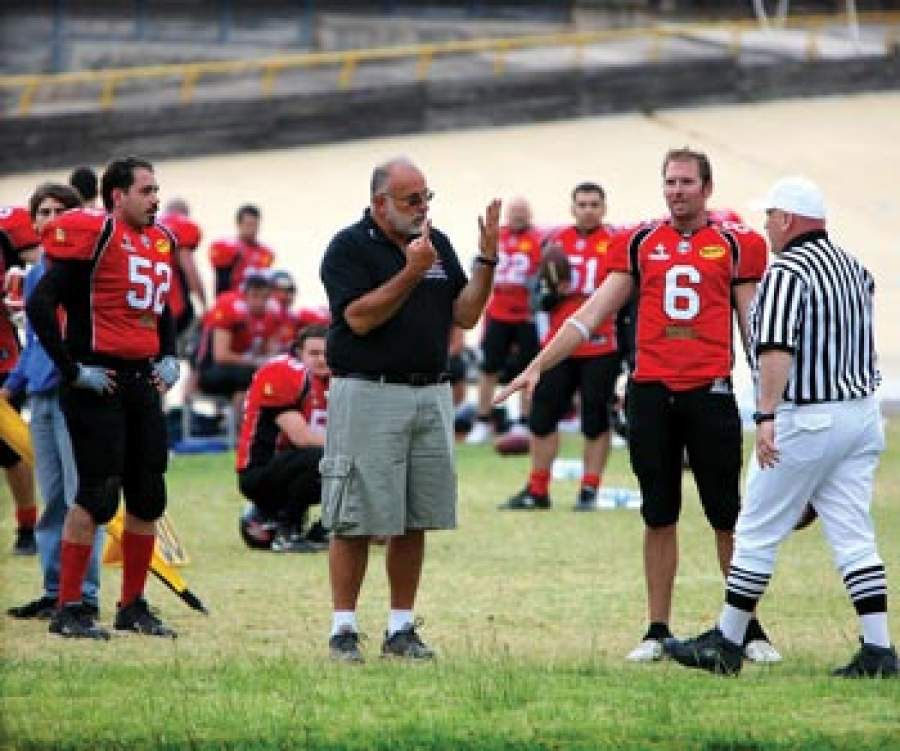 Coaching a sport can be a good means to travel and work in an area you are passionate about. One American football coach lands the perfect retirement gig in Europe.

For George Contreras, it all started with the pursuit of some post-retirement adventure —and upholding a promise. After spending 38 years as a high school football coach and teacher in Ventura County, California, he moved the next chapter of his life abroad thanks to a deal he made with friend and fellow coach, Rick Scott.

Contreras vividly remembers the last talk the two coaches had on a game night in November 2004. On that particular evening, they promised to one day teach American football together in Europe. Sadly, that dream would never be realized. The very next day, Scott had a sudden heart attack and passed away.

After retiring in 2007, Contreras held true to his side of the deal and set to work on finding a team to coach overseas. He registered online with europlayers.com, a website that serves as a resource for North American coaches and players who want to put their talents to use in Europe; the site caters to every sport from American football to water polo.

There are at least 28 European countries with American football teams, and more than 750 American clubs throughout the continent. Germany alone has more than 300 clubs, and many others are sprouting up in places like Serbia and Ukraine where the sport is catching on. While not all of these organizations can afford to hire North American coaches, many are on the lookout for experienced coaches willing to share their knowledge and passion for the game with foreign players.

In general, a college coaching background or professional coaching experience is not necessary. The key is having some experience, flexibility, persistence, a willingness to reach out to teams and, most importantly, an adventurous spirit. Contreras is an example of the type of candidate that European teams typically recruit—he played college football at the University of Washington before setting off on his long career as an educator.

In 2008, Contreras moved to Italy to begin his overseas coaching career as a defensive coach with the Catania Elephants, a Sicilian team in the Italian Football League. After spending two seasons coaching in Sicily, first as defensive coordinator and then as head coach, Contreras and his wife Laurie relocated to Sweden for the 2010 season, where Contreras was the Hässleholm Hurricanes' head coach.

As for compensation, salaries vary depending on the team’s resources and sponsors. Coaches who land a paid position can expect to earn about €1,000 to €1,200 ($1,400 to $1,700 CDN) per month for their services. Many teams also offer perks like round-trip airfare, health insurance, a furnished apartment, use of a car or transportation pass, internet, one or two hot meals per day and a gym pass. For Contreras, one of the most valuable of these was time off during the season when play shuts down for breaks and summer holidays. “The opportunity for Laurie and I to see Europe at a leisurely pace in the tourist off-season is of great value,” he says.

In addition to travelling through Europe during the off-season, Contreras conducts seminars and Q&A sessions at small colleges and other community sites in California to share his experiences and insights on living abroad.

Contreras admits there have been some minor bumps in the road along the way, like dealing with the occasional language barrier and adjusting to being away from friends and family. Still, the veteran coach offers this advice to anyone who might be thinking about taking such a leap: “Just do it. The last three years have given me the chance to sit back and reflect on what is most important to me as a coach and also in my private life.”