You are here: Home/ Articles/ Volunteer Abroad/ Blogs/ A Day in the Life of a Cyclist on the Silk Road 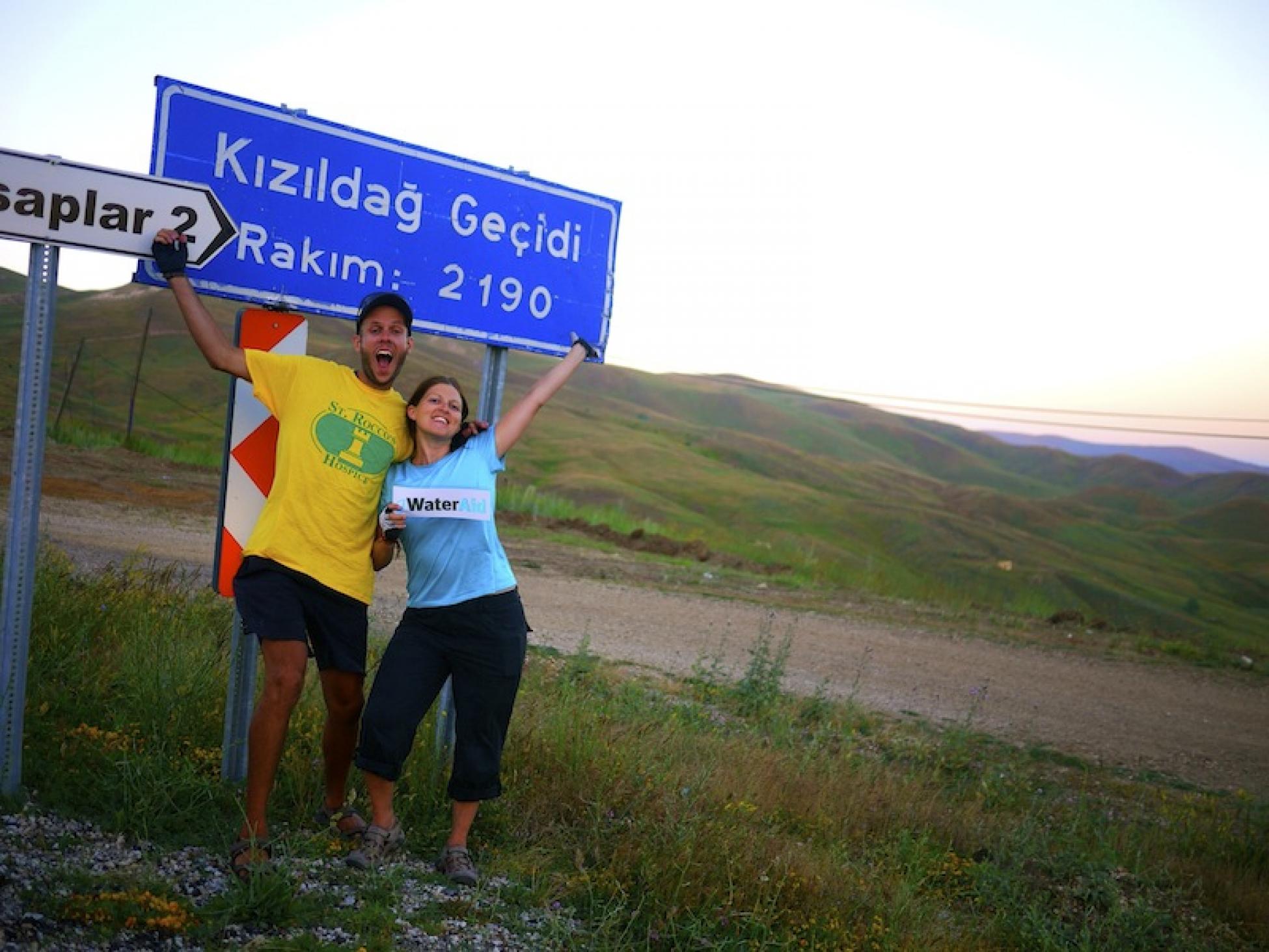 Kelly and Michael at the top of the mountain pass.
By  Kelly Sheldrick

Kelly is cycling 10,000 kilometres. But the reason why might surprise you.

It’s the start of another long cycle day along the Silk Road in Turkey’s Central Anatolia. Today we have to climb a 2190-metre mountain pass that divides Central and Eastern Anatolia.

Our last rest day was five days ago in Cappadocia, a UNESCO World Heritage site, with beautiful rock formations and cave churches. Five days feels like a lifetime ago—since then we have left for the hot, desolate and mountainous Central Anatolia plateau, which is very much off the tourist trail.

We usually start the day at sunrise, cycle until midday, rest for a few hours under the shade of a tree, then start cycling again in the afternoon until dusk.

We cycle for a solid few hours, making the most of the cooler weather, but by 10 a.m., it’s already hot and we’re still 40km from the pass.

We decide to pull into a gas station for a break. A gas station is a cyclist’s oasis in Turkey, with water, toilets, friendly owners and usually offers of snacks. This gas station is no exception. The owner invites us for tea, bread, cheese and olives. He tells us they were a gift from a truck driver—the modern day traders of the Silk Road.

Turkish people are some of the friendliest people I have been fortunate enough to meet and it’s not long before they start asking questions about our cycle trip: “Where are you going?” “How long are you cycling for?” “Why are you cycling?” These questions were usually followed with hand gestures of approval as well as looks of disbelief and sometimes confusion.

The reason for the confusion is that my boyfriend and I are currently 4500 kilometres into a 10,000-kilometre cross-continent cycle tour. We’re cycling from the French Alps to China’s Far East to raise funds and awareness about the global sanitation crisis.

Around the world, 2.5 billion people don’t have access to safe water, hygiene and sanitation. The UN estimates that 1.1 billion people defecate in the open, which is not only a symptom and a cause of unsanitary conditions, it also puts vulnerable women and children at risk of abuse and rape. In May of this year, two girls were found hung from a tree in India, after being repeatedly raped while “going to the toilet.” This is a stark reminder of why access to safe, private and hygienic toilets is so important.

This is what motivates us on our journey.

After a long rest, we continue on our way. The climb is gradual and long and after several hours of climbing we finally make it to the mountain pass summit—it’s already getting dark, but better late than never. We’re extremely exhausted and decide to keep our eyes peeled for a good wild camping spot.

Unfortunately, the descent down the other side is nowhere near as gradual and the road conditions are deteriorating. We’re left flying down a steep mountain pass, with limited light, on a bumpy roads and there’s no camping spots in sight. After about 90 minutes, we ask at a small village whether there are any camping areas nearby. Within minutes, we’re invited to sleep in the library room of a mosque and given a yummy Turkish dinner. This is just another example of the amazing hospitality of the Turkish people.

Before the village locals begin their evening pray in the big mosque, we chat with them. One asks why we are cycling to China and I reply with several hand gestures, signifying "charity," and "sanitation." I point to a squat toilet and Michael, who speaks a bit of Turkish, attempts to fill in the rest. Talking about sanitation is still a global taboo, which makes it difficult and sometimes awkward to talk about, especially to people that have no idea about the global sanitation crisis.

We believe that we can break the taboo about sanitation and toilets, but change can only occur if we start talking more about sanitation and, well, poo. Talking about these issues will help strengthen the cause, and prevent other women and children falling victim to such horrible crimes. One way people can get involved in breaking the “sanitation taboo” is getting involved in World Toilet Day, which is on 19th Nov 2014. you can read more about it at their official site.

Kelly Sheldrick, along with Michael Cowgill, is cycling from the French Alps to China’s Far East to raise funds and awareness about the global sanitation crisis. If you would like to donate to the cause, please visit https://give.everydayhero.com/au/france-to-china-by-bike. To follow their progress, visit their facebook page.