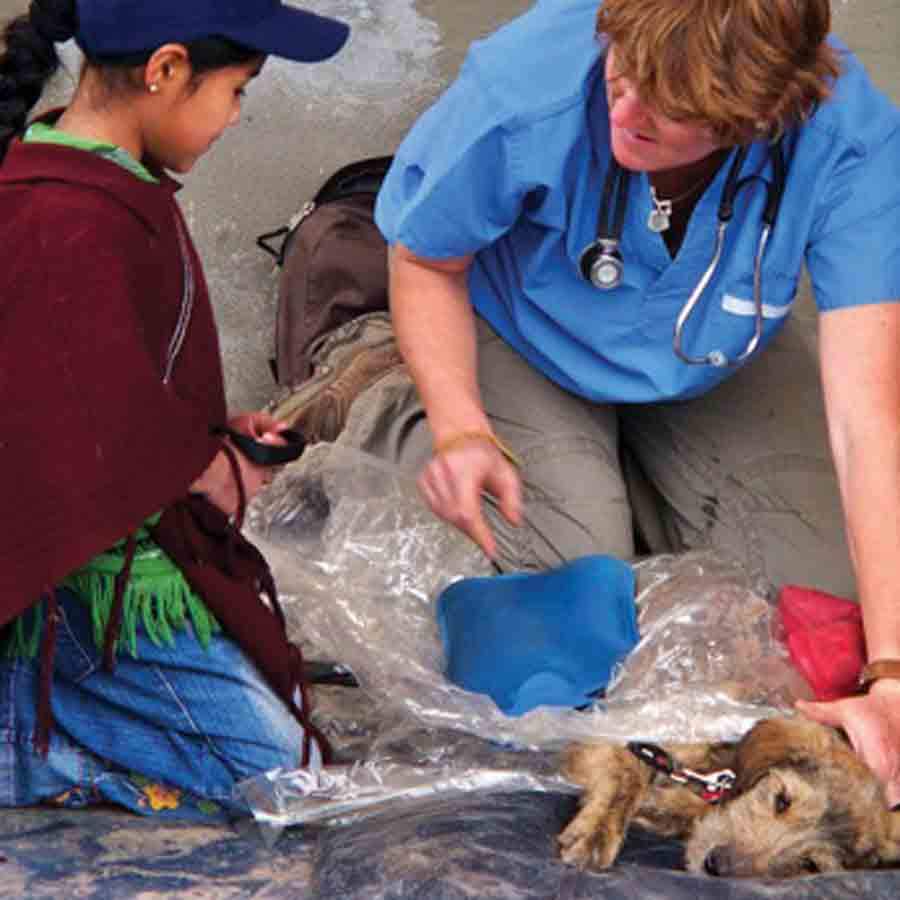 All night, strings of firecrackers and the yelps of dogs echo across the valley. In Guatemala, firecrackers are the normal way to break up the boredom of a life in poverty, or to celebrate birthdays or new wealth. Through the mist, all I see is my breath in little cartoon clouds. It’s a metaphor, perhaps, of how we look across from one culture to another.

I am here, as president of Veterinarians without Borders (VWB/VSF) Canada, on a world tour to review our programmes in 15 countries. One of our goals is to help communities find sustainable ways to control rabies and improve the health of free-roaming dogs, called Perros callejeros in Guatemala—street wanderers. These are dogs, some with owners, that spend their days on the streets, like gangs of unemployed adolescents.

In 2000, after four people died agonizing deaths from rabies, the Guatemalan Ministry of Health reportedly depleted its supply of strychnine trying to get rid of street dogs. Later, they drove through neighbourhoods with loudspeakers and vaccines and waited for children to drag out their reluctant canine companions to get rabies shots. In contrast, North American veterinarians often prefer the blitz-neuter approach, descending on communities, vaccinating and neutering as many dogs as they can catch, and then moving on, feeling good about themselves.There is no requirement for community involvement, nor is there any capacity left behind to deal with the problem. Worldwide, both the blitz-neuter approach and Guatemala’s poison-and-vaccinate strategy have had, at best, mixed success—there is little evidence of any kind on the impacts of such programmes.

The big international donors don't "do" animals; their diseases are considered unimportant, even though rabies kills at least 55,000 people around the world annually.

There are good, cheap rabies vaccines for animals, but the problem is convincing people to use them on callejeros. The big international donors don’t “do” animals; their diseases are considered unimportant, even though rabies kills at least 55,000 people around the world annually. Few health workers see dogs as essential players in the ecology of human health. Governments wait until someone gets bitten and then try to get the post-exposure vaccine to them; or they panic and kill as many dogs as they can. The human vaccine costs hundreds of dollars and is nearly impossible to get, while the dog vaccine sells for less than 10 percent of that cost. Killing dogs often makes the situation worse when the survivors fight over territory.

Veterinarians and public health officials tell me that each Guatemalan rural household owns, on average, seven dogs. They act as punk guards while the family is out working in the fields, or sleeping at night. Naturally, vicious dogs of uncertain vaccination status make better guards.

Based on discussions with health workers and veterinarians around the world, I’m convinced that we need a cultural change in attitudes towards animals, and a taking-of-ownership by the communities where dogs live. Outsiders cannot “solve” this but, if we build trust, we can facilitate, educate, train, motivate and work alongside people in the communities. Local animal lovers, who may unwittingly feed the callejeros, need to be recruited into the programme as volunteers. We don’t aim to get rid of all the street dogs. They are, after all, companions, garbage recyclers, rat controllers and community police. The idea is to have a stable, smaller, healthier population of street dogs with identified “owners.”

The test case for VWB/VSF’s community-based approach in Guatemala is Todos Santos, a Mayan town in the mountains north of Huehuetenango, where tumbledown shacks rub shoulders with California-style houses built with remittance money. People here care about their hometown. Over a period of two years, our volunteers have worked with the mayor, city council and local volunteers to conduct household surveys and street dog studies. We've put up posters, held meetings, and made radio announcements to encourage people to bring their dogs to the clinics for sterilization and rabies shots. The clinics have been held in community halls, vacant rooms, and sometimes outside, under the trees, in order to make them accessible. The population of owned dogs is coming under control and the number of unowned dogs has dropped. By 2009 about half of the owned male dogs in Todos Santos had been examined, vaccinated for rabies and sterilized. At the end of the year, we hope to vaccinate and sterilize most of the owned males and females.

We're working with local partners to deal with the remaining unowned dogs, and to address the garbage (dog feeding sites) issue. We plan to participate in local meetings and workshops to talk about pet ownership and ways to prevent overpopulation.

From my hotel, I watch a creamy full moon hovering above the black silhouette of a volcano. The firecrackers punctuate a droning brass band dirge, which plays on and on in its almost-in-tune, battered majesty.