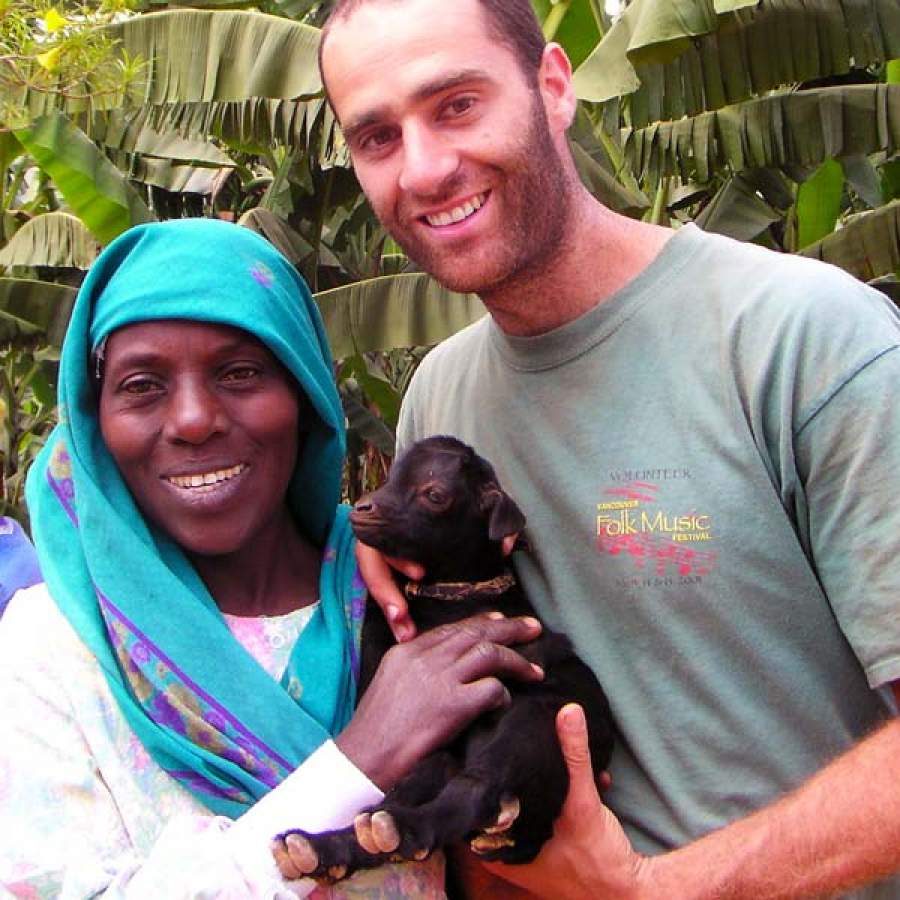 An innovative livestock lending brings farming into the 21st century.

Times have changed since the romantic era of James Herriot and the neighbour's cow. In our globalized world, some veterinarians are applying their unique training to reach beyond conventional practice by getting involved in public health, environmental sustainability and international development. In 2009, three veterinary graduates from the University of Saskatchewan, myself included, travelled to southwest Uganda to work on a goat rearing initiative near the city of Mbarara with an organization called Veterinarians Without Borders.

Goats thrive and reproduce without a lot of outside intervention and are central to VWB/VSF’s special approach to community development. Pairs of goats are given to selected families who can raise them and eventually produce three goat kids, which can then be donated and loaned to someone else. It’s a small-scale lending system that uses livestock, a more tangible and relevant currency than cash to many in the Third World. The project aims to empower women, who tend to improve the family unit and the community as a whole.

Women own only a small fraction of Uganda's land but they're responsible for the great majority of farm work, along with childcare and homemaking.

Paskaria Karukike, a grandmother living with her frail husband and large family in the Ugandan countryside, is next in line to receive goats through the project. Paskaria, who figures she is in her 80s, is known within her community as a spry old woman who walks miles to attend each community function. She’s also the caregiver and guardian for ten of her grandchildren, who were orphaned when five of her own ten children died of AIDS and other illnesses. On her small plot she grows coffee, papaya, pineapple, various greens and matoke, or plantain. She has prepared for the goats’ arrival by building a pen and planting forage, a requirement of participating in the project.

Women own only a small fraction of Uganda’s land but they’re responsible for the great majority of farm work, along with childcare and homemaking. In addition, the AIDS epidemic is adding the burden of raising orphan children. That’s why the project works specifically with HIV/AIDS-afflicted families, particularly those with vulnerable children.

Healthy goats can provide meat and lactose-free milk, especially valuable for the diets of HIV-infected family members. Extra milk can be sold in the market and the goats themselves can be sold for meat or breeding purposes. In this region, where livestock is a measure of wealth, the income generated by the animals can pay for basic needs such as education, health care and proper nutrition.

The project area, once a biologically diverse mosaic of thickets and grassland, is now a densely populated, environmentally degraded region dominated by a monoculture of banana plantations. Poverty has led people to do what they deem necessary to survive: clearing and burning wild land to grow low-yield crops or graze livestock; levelling forests for building, cooking fires and charcoal; poaching wild animals.

On a typical day, beneath the blazing African sun, we foreign veterinarians make our rounds on the red dirt paths between mud homes. A translator of the local Runyankore language helps us to discuss animal management with farmers. Livestock in this area includes goats, sheep, chickens, ducks, rabbit, swine and, for “well off” farmers, cattle. We take blood samples, trim hoofs, castrate and give various medications. Much time is spent chasing, wrestling and attempting to restrain unwilling goats. Each day leaves us utterly exhausted and stinking like male goat pheromones, but with a feeling of accomplishment.

When not in the field, we’re searching for healthy goats to purchase for distribution, or planning the next community training day. Along with the goats, the project provides the information and develops the skills needed to efficiently rear them. This livestock management training is integral to the long-term success of the project, but it’s hampered by the well-entrenched tradition of subsistence farming, a once viable livelihood in the region.

Rather than running a business or working a nine-to-five job, subsistence farming involves working the land to feed one’s family. Due to environmental degradation, overpopulation and land fragmentation, however, families can no longer support themselves through these traditional ways. Despite this reality, poverty and despair have led to apathy and an unwillingness to change.

The project trains people in farming techniques that can help them increase the yields of their land and livestock so they will have extra products to sell. A few former goat recipients have been selected by their community to be demonstration farmers, or “paravets,” who will continue to improve the practices of their communities long after the foreign veterinarians are gone.

The VWB/VSF sustainable livestock initiative is one of many programmes beginning to take off in Uganda; for example, Uganda’s National Agricultural Advisory Services (NAADS) also gives out livestock. These programmes can make a big difference in the lives of people like Paskaria. The vulnerable but diverse group of HIV positive men and women, grandmothers, widows and orphans will have a chance to rise above poverty and, if the political situation in Uganda remains stable, they, along with their communities, will one day thrive.

For more information on Veterinarians Without Borders visit vwb-vsf.ca. To read about the experiences of Rocky and his colleagues, visit vwbvsfuganda.blogspot.com.