A Second Chance for Honduras’ Mangroves 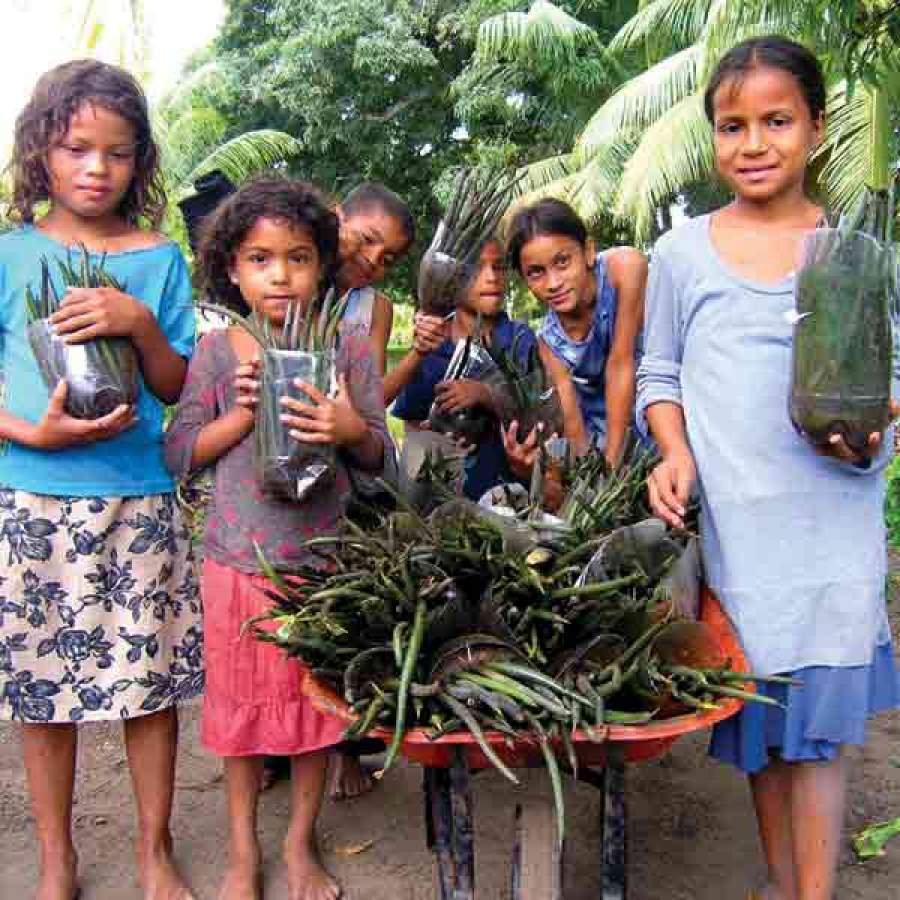 A Honduran fishing village plants a future for mangroves with the help of Canadian non-profit.

When Jenny DeMarco first visited the Caribbean island of Utila last December—a tiny pancake of land located about 30 kilometres off the mainland of Honduras—she spotted a patch of mangrove trees on a backstreet behind the many dive shops, restaurants and beaches. It was just a small area, roughly 15 metres square, but DeMarco was excited about her discovery.

Just six weeks later, DeMarco returned to the island with three people in tow to show them her findings. They wandered up and down the 13-kilometre length of the island only to find stumps where the trees once stood." That whole patch of mangrove was gone," says DeMarco. "I was totally devastated."

DeMarco is the coordinator of a mangrove restoration project run by the Falls Brook Centre, a New Brunswick-based non-profit that supports environmental initiatives both in Canada and overseas. They are working in conjunction with Honduran environmental organization Fundación Cuero y Salado (FUCSA), to restore depleted mangrove forests on Honduras' North Atlantic coast.

At just 24 years old, DeMarco is the youngest member of the Falls Brook team. Originally from Vancouver, she holds a degree in environment and development from McGill University. She's been at the helm of the mangrove restoration project in Honduras since its launch in October 2009.

About three quarters of all saltwater species will spend one stage of their life in a mangrove, making the world's fish supply inextricably linked to the mangrove ecosystem.

A mangrove is a type of tree that lives where fresh and salt water meet. Mangroves are extremely important because they act as a buffer between the ocean and the land, protecting communities from storms and rising sea levels—an increasing concern due to climate change. They also filter toxins out of the water before they reach the sea, and provide habitat for many saltwater species. Because mangroves are such an essential ecosystem, they are protected by the United Nations, as well as the Ramsar Convention on Wetlands¬, an intergovernmental treaty dedicated to maintaining and protecting the world's wetlands.

The wetland on the North Atlantic coast of Honduras—known as the Cuero y Salado Wildlife Refuge—was the first site in the country to be designated as a wetland of international importance under the treaty. It is here that the Falls Brook team has focused its mangrove regeneration efforts.

Even though the importance of mangroves is recognized on a global level, DeMarco says that the sentiment is not necessarily shared by the communities near these ecosystems. Just as she saw on the island of Utila, mangroves are still being cut down in many places to make way for cattle ranching, shrimp farms—or tourist hotels and beaches.

"The biggest problem with mangroves is that people don’t necessarily see value in them. They [mangroves] can smell bad, like sulphur. They can have a lot of bugs and they’re not suited for agriculture," she explains.

DeMarco explains, “Analog forestry is born out of the idea that you can’t just ask people to restore native species without having some kind of an economic incentive—planting things like timber trees, fruit trees, or nuts or spices—some kind of product that has economic value so there’s an incentive to preserve forests.”

DeMarco and her team are currently working in Salado Barra, a rural fishing village with a population of only 240 people. The town lies within the Cuero y Salado Wildlife Refuge, where there are no roads leading in or out, just a train that was once used for transporting fruit. Most people in Salado Barra live in rustic huts, with no electricity or indoor plumbing. These huts stand in contrast with several large, colonial-style plantation homes that, for the most part, remain empty—a testament to the land's history of fruit production more than a century ago.

Because Salado Barra is a fishing village, it’s not hard to convince the locals that they need their mangroves to survive. About three quarters of all saltwater species will spend one stage of their life in a mangrove, making the world's fish supply inextricably linked to the mangrove ecosystem.

“They [the community] are almost entirely fishing based," says DeMarco. "It's a scary thing for them that fishing resources are depleting. So that’s one reason that fishermen have been very eager to participate; there’s a direct link between the health of your mangroves and your fish resources.”

How the project works is fairly simple: locals collect seeds from native species and start community nurseries. Once the seeds turn into seedlings—a process that can take as long as six months to ensure they are strong enough to withstand environmental stress—they can be planted outdoors.

The community is currently focused on planting tree species that are both in high demand and highly threatened, such as mangroves (red, white and black), timber trees (which are used to build canoes), and jagua (a type of palm used for building houses). Eventually, they hope to plant dozens of different species and restore the diversity of the native ecosystem. While the project aims to benefit the community by restoring the fish habitat, there is also a hope that the community will eventually benefit from increased tourism to the wildlife reserve.

Mangroves are still being cut down in many places to make way for cattle ranching, shrimp farms—or tourist hotels and beaches.DeMarco says community members of all ages are able to participate in the restoration. On most days, people just show up and help out.

"If it was a planting day and 30 people wanted to help, then 30 people helped," she explains. “It’s been unlike any project I’ve worked on. It’s been really fantastic, very inclusive and participatory."

Reyna Adelaida, who lives in the community of Salado Barra with her three children, has been helping out with planting in the area. She says there is a lot of enthusiasm for the project within the community.

"We have never planted, and the truth is, it's a good experience. Because we are motivated to work on something that gives back to us and our children."

At the moment, an American organization called the Blue Moon Fund is providing funding for the project, but the initial success has given the team hope that it may turn it into something bigger, which would allow them to span more territory. The project has even received recognition from the Honduran government, which recently released a national climate change strategy. The document included a description of the Falls Brook project and a note that mangrove restoration through analog forestry is a priority as a means to protect against storms and rising sea levels—potential effects of climate change.

While recognition from the government is encouraging, the community is still in the driver’s seat when it comes to the work of restoring and maintaining the forest. José Herrero is one of the founders of the Cuero y Salado Wildlife Refuge who has been working in the community for about 25 years. He says he can see a difference in the local attitude towards mangroves.

"Here, wetlands were seen as something that has to be drained for agriculture, golf courses or shopping malls, instead of looking at them as an area of rich biodiversity that protects against hurricanes and climate change," says Herrero. "Now there is more awareness. And through [the work of] Falls Brook, the community has come to value the mangrove more." Herrero points out that reforestation is a long-term commitment and that without the support of the community over the long haul, it won’t succeed.

DeMarco agrees. The real work and long-term support for the project has to come from within the community. She points to her experience on the island of Utila as an example of just how important it is to have to the community value and protect the trees so they won't be depleted again.

"It shows it’s not just a matter of planting trees—which, of course, is incredibly important in a forestry project, but planting trees is easy," says DeMarco. "Ensuring that they’re still there in 25 years is the hard part. If people came in [from outside the community] and planted trees for them, I don’t think they’d still be there. But if the community themselves plant them and it's something they’re going to care for and protect, then they stand a chance."