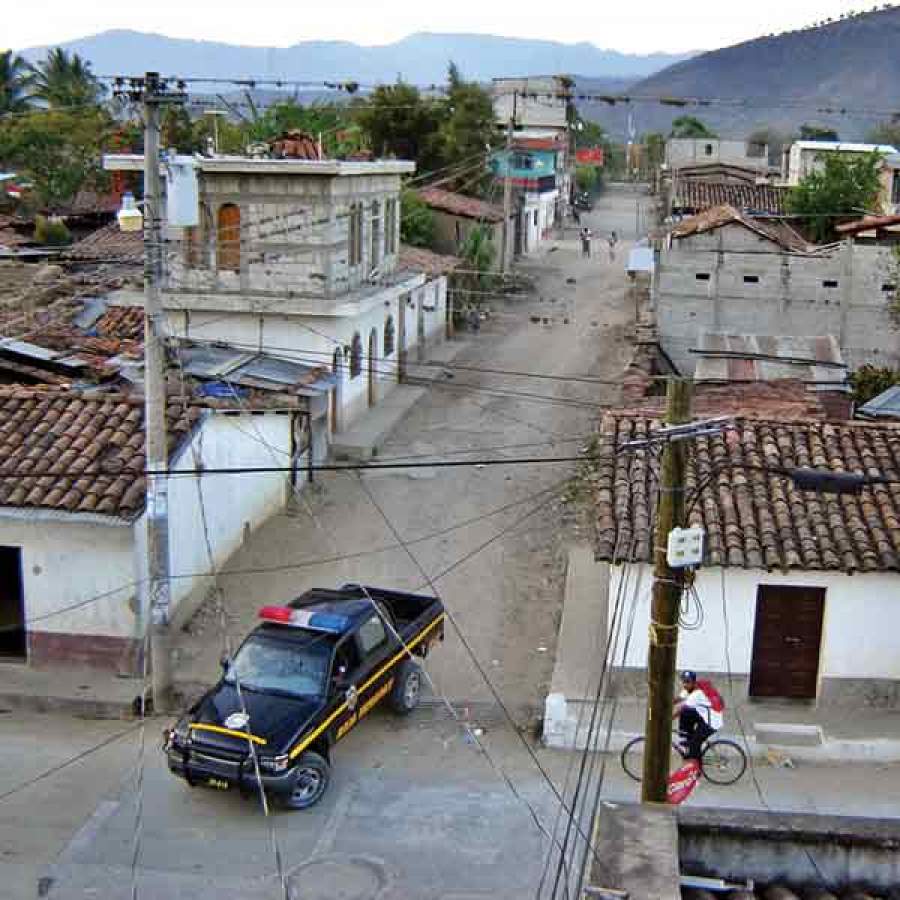 For most of us in North America, a visit to our local lawyer’s office is an unremarkable experience, but for many Guatemalans in the town of Rabinal, just north of Guatemala City, visiting the Rabinal Community Legal Clinic may mean a person is risking his or her life.  This is what Winnipeg-born Brenda Gunn, 29, learned when she worked with the clinic for five months this year in an internship with Nova Scotia’s Tatamagouche Centre.

Rabinal is one of the regions in Guatemala that was most severely affected by the country’s 36-year civil war that ended in 1996.  More than 200,000 people in Guatemala died or disappeared, mainly at the hands of armed forces (which received various forms of support from the U.S.) in an attempt to quash a largely Mayan uprising.  Ultimately, most of those killed in the lengthy conflict were not guerrillas but civilians, the bulk of them poor and indigenous.

Now, 12 years since the conflict ended, justice for the victims has been slow to come.  The community’s legal clinic—founded and directed by a local man who lost most of his family to the violence—has become integral in the fight to seek justice for the many victims and their families.

From the outside, Rabinal may not look much different from any other community, says Gunn.  “It’s just a run-of-the mill Guatemalan town—very friendly, very nice, clean, lots of parties and a great market.”

Behind the friendly veneer, however, most people here still hold a deep sense of mistrust.  Gunn, who specializes in international law and indigenous land rights, explains that a major reason for this—and the reason locals are risking their lives when they pursue legal claims—is that many of those responsible for the violence still live in town.  Men from the community were forced into the civil defence patrols that were under the command of the army.

“It’s not the army that rolled into town, killed everyone and rolled out,” Gunn says.  “It was the community that was forced to police itself, and now those people are still living in that community.  So it very well could be your neighbour who killed your husband and son, and he’s still living beside you and no one is doing anything to prosecute him or the people who ordered him to commit these atrocities.”

Since the civil war ended, victims across the country have been pursuing claims of genocide in an effort to seek compensation and, even more importantly, public recognition and vindication of their claims.  The legal clinic in Rabinal was set up following the end of the civil war to attend to the needs of the victims.  Many locals have given their testimonies, and lawyers are working to prove that what happened around Rabinal was part of a larger strategy of genocide against indigenous people in Guatemala.

Gunn has an undergraduate law degree from the University of Toronto, a Masters of Law from the University of Arizona, and experience in the field of human rights.  She’s worked in Canada and Australia, and while she was in Arizona, she was part of a team that submitted land claims before the Inter-American Commission on Human Rights, on behalf of communities in Belize.  When she saw a posting for this Tatamagouche Centre internship, funded by the Canadian International Development Agency (CIDA), it was right up her alley and she was set on getting involved.

"It very well could be your neighbour who killed your husband and son, and he’s still living beside you and no one is doing anything to prosecute him."

From a very young age Gunn has been set on righting what she sees as inequality in the world.  For that reason, she says, she first pursued women’s studies and native studies to understand why inequality exists, and later studied law in order to get the tools to effect change.

“I don’t think there was any moment of like, a slap in the face, you’ve just been discriminated against.  But when you live in the world you experience it, whether you're benefiting from the privileges or being impacted negatively by discrimination or inequality.  It’s there.  It was that sense that I don’t like how this world operates, and I want it to be better and I want to change it.”

Gunn flew to Guatemala in November 2007 along with other interns working in fields like nursing, youth at risk, and sustainable agriculture.   In Rabinal, Gunn lived at a locally run guesthouse and kept a regular work schedule, from 8 a.m. through 5 p.m.  She worked alongside Maria Dolores, one of two lawyers in the clinic who focused on the genocide cases.

She says her prior experience prepared her for some of the tougher aspects of the job, like hearing survivors’ stories, but she found everyday work in a foreign country and a new language a big challenge.  She’d had only six weeks of Spanish-language training upon arrival and she had no real knowledge of Achi, the indigenous language most of the clients spoke.  A translator was provided when Gunn held meetings with survivors, but most of the direct communication with the clients had to be done by Dolores, who speaks Achi.

“It was frustrating feeling like, ok, I’m a pretty good lawyer in English and I know what I’m doing, but trying to be a lawyer in Spanish was just a whole other level of complexity and it was somewhat a new area of law for me.”

Despite the challenges, Gunn managed to forge a strong relationship with her colleague and felt she was able to contribute in concrete ways, in part because of her previous experience with the Inter-American Commission on Human Rights.  She and Dolores brainstormed together, worked out strategies and Gunn put forth some of her contacts who could help the case along.

Even with Gunn’s extensive experience in the human-rights field, the political landscape managed to surprise her.  Before heading down to Guatemala, she was familiar with the country’s public persona at UN meetings, so she was taken aback when she didn’t see these rights reflected on the ground in Guatemala.

"Everyone knows the danger and they know that justice isn’t coming anytime soon;  they’ve been waiting 20 years..."

“The Guatemalan government has always been a friend to the indigenous people [in the public arena]; it’s been very helpful in negotiating and pushing for the United Nations Declaration on the Rights of Indigenous Peoples that passed last year.  But when you get down there, it’s a whole different world,” she explains.  “I was really quite shocked to see the divide between what the government says it does at international meetings, and how it continues to operate at the local level—not protecting indigenous land rights, not providing funding for curriculum in indigenous languages.”

The legal clinic is working on gaining recognition of land rights, but Gunn says that, generally speaking, the government has not been helpful, or interested, in the matter.  Gunn has a deep understanding and interest in land issues, not only because of her legal expertise, but also because she herself is Métis.

When asked about similarities between Canadian and Guatemalan aboriginals, she hesitates to generalize, but she does note there is a common ethos when it comes to the connection of people to their land.  “I think you get that sense that people want to protect their land.  I would talk about it as technology of colonization, the removal of indigenous people from land, and how it is so devastating for indigenous people.  The main tool to oppress indigenous people is to remove them from their land.  That’s why we had the residential school system here [in Canada], that’s why the treaties got indigenous people to cede the majority of the territory and just move onto small pieces of land that were not necessarily the lands they were connected to.”

The Rabinal Community Legal Clinic is located just outside the town, close to Rabinal’s graveyard.  The founder and director of the programme, Jesús Tecú Osorio, was a witness to a massacre in 1982 when he was 11 years old.  His two-year-old brother was among the 177 women and children killed near the village of Río Negro.  Tecú Osorio and 17 other children survived the massacre, but he was forced to be a servant in the household of the civil defence patroller responsible for his brother’s death.  After he managed to escape, he began to speak out against what was happening in the community and to testify in court against those who committed the atrocities.  His commitment to justice won him a Reebok Human Rights Award in 1996, worth $25,000, which he used to fund the clinic and other programmes for victims.

Tecú Osorio has received numerous threats on his life, but he is persisting, like many other witnesses and lawyers around the country.  So far, mainly low-level convictions have been achieved.  Another organization, the Centre for Legal Action in Human Rights, was involved in the case this past May when five former paramilitaries were sentenced to 780 years each for the Río Negro massacre.  None of those who were at the top of the ladder giving the orders, and none of the intellectual authors of the genocide have been convicted.  Many argue that until this happens, justice will not be served.

Gunn has returned to Canada, where she does independent consulting for organizations in Manitoba, Ontario and Australia.  Her memories of Guatemala linger.

“What I’ve walked away with is an amazing sense of how people can be so committed to justice no matter the cost,” Gunn explains.  “The reality of doing human rights work in Guatemala is that it puts you in danger.  As a foreigner you’re a little safer because local people aren’t going to target you most likely.  But as a local person, if you try to make changes, you are seriously putting your life in danger.  The people that I worked with both as human rights defenders and clients know the risks;  everyone knows the danger and they know that justice isn’t coming anytime soon;  they’ve been waiting 20 years… but they’re just committed to it no matter what.  They just want to be vindicated, they want the world to recognize they’ve been wronged and they want the Guatemalan government to be known for the things that it has done and is doing.  And I think that amount of commitment is just outstanding.”