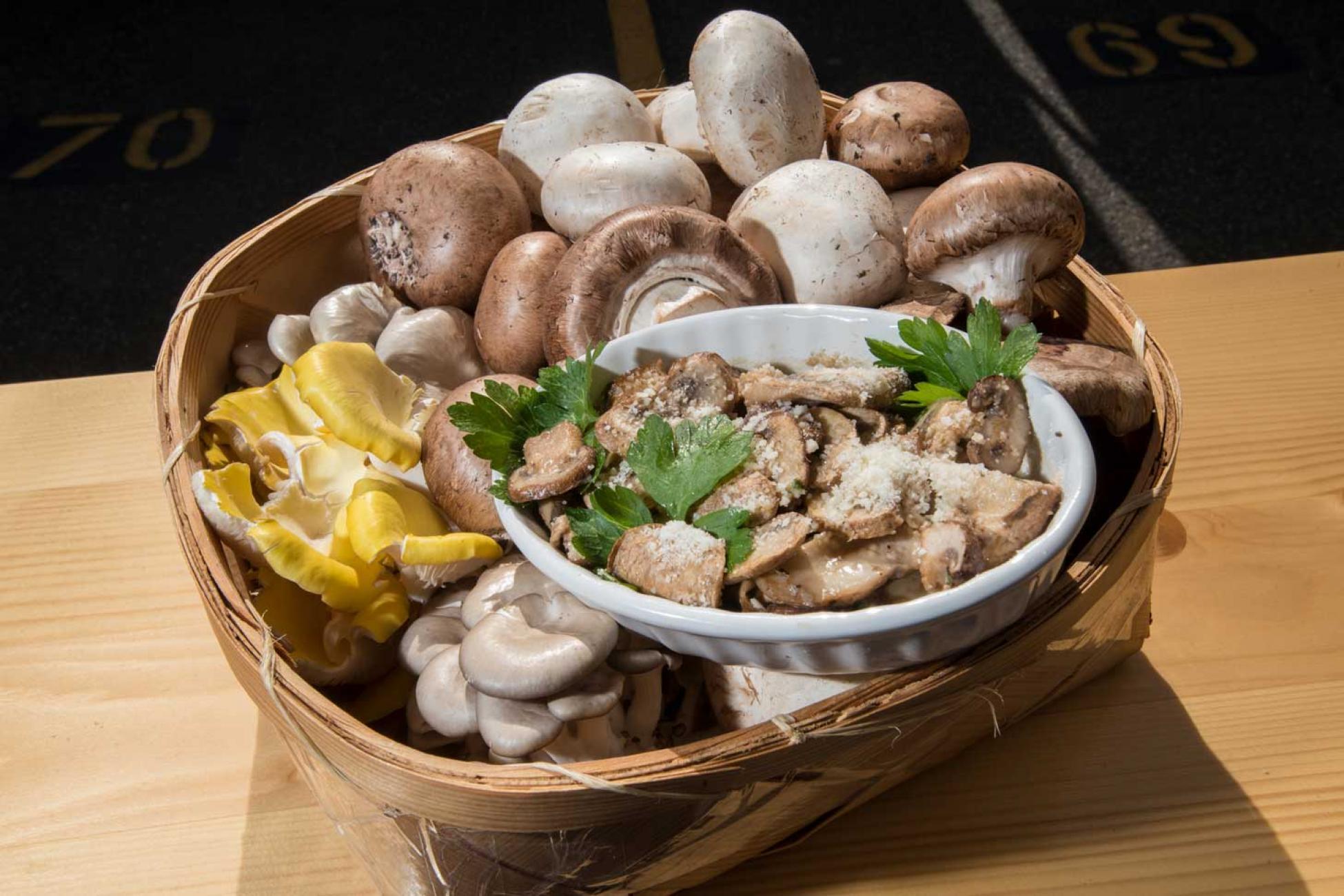 Could mushrooms be magic for one of Mexico's poorest regions?

I felt like Jesse Pinkman in Breaking Bad. Thrust into a world of precise measurements, technical procedures, and techno music—all the while, learning from a veteran of the trade.

The Walter White to my Pinkman was Johann Mathieu, a man who knows exactly the right processes, measurements and temperatures needed to get the perfect product every time. Like White, Mathieu takes immense pride in the final result; it is, after all, the result of years of fine-tuning his technique. However, unlike White and Pinkman, we weren’t producing meth—we were growing gourmet, organic mushrooms.

Located deep in the isolated Sierra Norte of Mexico’s Oaxaca state, Mathieu’s farming project, Micologica, produces mushrooms using relatively low-tech, environmentally friendly, and completely organic cultivation processes. However, it’s not only good for the environment; the project is contributing to efforts to promote ecologically sound development in one of Mexico’s poorest regions, where 67 per cent of the population lives in poverty.

Sitting on a Goldmine

Sierra Norte is less than two hours away from the state’s capital, Oaxaca City, but the mountainous region might as well be another country. Mathieu’s farm is just outside the highland village of Benito Juarez, one of eight settlements that form the sierra’s Pueblos Mancomunados (Commonwealth of Villages). This collection of predominantly Zapotec villages is fiercely independent of the Mexican state and prides itself on a unique system of direct democracy. Its semi-autonomy has been partly recognized by the Mexican government since 1961. Today, political parties are banned, while the police and military rarely venture there.

As a French-Portuguese mycologist, Mathieu first visited the region in 2009, when researching the cultural significance of local mushrooms in Oaxaca.

“I completely fell in love with this climate, this forest and the friendly people of the region,” Mathieu said. Of course, it wasn’t just the good weather that made Mathieu stay. He arrived at a time when the people of the sierra were just discovering that they were sitting on a goldmine—exotic mushrooms.

Until the 1990s, many of the region’s diverse types of rare, wild mushrooms—which thrive thanks to a mild climate, high levels of rainfall, and unpolluted natural environment—went ignored by locals. According to Mathieu, just a handful were actually consumed, while the rest were treated with suspicion and often assumed to be toxic. Yet many of these mushrooms are prized globally. For example, the bright orange Amanita Caesarea is extremely rare in the Americas, but grows throughout the sierra. In Europe, this mushroom has been highly regarded for centuries, and was purportedly a favourite dish of Roman emperors. Today, it can sell in Europe for around US$70 per kilo.

The people of the sierra discovered that they were sitting on a goldmine—exotic mushrooms.

Mathieu teamed up with Mexican mycologist Josefina Jimenez and started Micologica. The model farm is simple and practical; it demonstrates how to cultivate mushrooms using materials already provided by the forest and how to sell them in Oaxaca, with very little start-up capital necessary. In addition to volunteer programs for international visitors, Micologica offers free training courses to local farmers, showing them how they can benefit from producing mushrooms sustainably to meet a growing international demand.

They weren’t the first to take this tack; many NGOs have sought to promote sustainable development in the region over the past two decades, including through mushroom cultivation projects. In the nearby central valleys of Oaxaca, for example, non-profit Tierra del Sol promotes permaculture, including offering courses on sustainable agriculture to both locals and international visitors. Some local families also cultivate edible mushrooms on a seasonal basis. However, Micologica is the only organization in the sierra that offers fully organic, permanent mushroom cultivation.

After meeting Mathieu through other NGO workers in Oaxaca, I took him up on his offer to volunteer on the farm. I soon found myself outside a seemingly ordinary cottage—no different from the dozens of other farmhouses that dot the sierra. Inside, however, a laboratory of sorts had taken shape. Away from the sunlight, a crop of shiitake and oyster mushrooms was growing in silence. Elsewhere, outdoor patches of Mathieu's mushrooms could be found huddled in the undergrowth near a softly bubbling mountain stream.

Micologica operates with a focus on being environmentally friendly and cost-effective. On my first day on the farm, we gathered leftover timber from a felled tree to make our own sawdust. This was more labour-intensive than simply buying bulk sawdust, but it was cheaper and had a much smaller environmental footprint. The sawdust was later sterilized and implanted with a mushroom starter culture, then packed inside the cottage. Within a month, the bags would be bursting with fresh mushrooms.

Using Mathieu and Jimenez’s method, there’s little need for harmful chemicals or expensive machinery. Yet the results are juicy, tasty mushrooms that can be sold in local markets at decent prices.

Micologica’s mushroom farm doesn’t just provide a source of income—it dovetails with local community efforts to turn the sierra into an ecotourism paradise, thanks to an increasingly popular mushroom festival in the village of Cuajimoloyas. The festival started in 2001 as a low-key affair among a small group of local mushroom enthusiasts. Now, it draws hundreds of mushroom enthusiasts over a weekend in July every year.

Along with the fair, tourists are also being increasingly drawn to the region by tour operators offering a mix of fungi and hiking. Zapotrek offers multi-day mushroom hikes in Oaxaca’s highlands. Elsewhere in Oaxaca, the villages of San Jose del Pacifico and Huautla de Jimenez are both overflowing with tour guides, touts, and shamans—all offering mushroom tours of a very different variety.

To cater to these tourists, the Pueblos Mancomunados also operate their own Expediciones Sierra Norte. While they don’t offer dedicated mushroom tours, the company is the result of a two and a half decade plan to turn the pueblos into an ecotourism destination. The project started as nothing more than a zipline and a few hiking trails. Today, the communities have a network of campsites and hiking lodges, plus restaurants and nature guides. All these tourism assets are community-owned, and each year the income is evenly distributed among the villagers and funnelled to joint community projects, such as a school breakfast program.

“Nowadays, we always have funds for the village and it’s thanks to the tourism industry,” said Jose Mesinas, a resident of the village of Benito Juarez. “It’s so beneficial, because the money goes directly to families; it goes to the people.”

Without these tourism dollars—and alternative sources of income provided by organizations such as Micologica—Pueblos Mancomunados could lose its best and brightest. Across much of Mexico, young people from small villages are flocking to the cities for work, and leaving their traditional communities behind. According to the Mexican National Population Council, almost half of all Mexicans that migrate to the U.S. are from rural communities.

Mathieu believes that mushrooms could play a role in stemming the declining population of small communities of the Pueblos Mancomunados, by creating jobs in ecotourism and mushroom cultivation. Currently, he and locals are in the early stages of planning a mushroom museum and even a local mycological institute.

“Perhaps, in the near future,” Mathieu muses, “we could be seeing communities fully embracing the cultivation of mushrooms all year round on a long-term, sustainable, and communal basis. Through this, the younger generation may well have a better future, without needing to leave their ancestral lands.”

• If you have a love of mushrooms, are prepared to work outdoors and have basic conversational Spanish skills, Micologica accepts short and long-term volunteers. Accommodation with a local family can be organized through Micologica for around US$8 a night, which includes meals. Long-term visitors can rent fully furnished, self-contained cabins for around US$21 a week. micologica.mex.tl

• At Tierra del Sol, volunteers can work on a permaculture farm in the village of Tlacochahuaya, in Oaxaca’s central valleys region. Volunteers are expected to work around four hours a day. tierradelsol.org.mx

• Visitors interested in hiking through the Pueblos Mancomunados can contact Expediciones Sierra Norte, which provides tours and accommodation. Prices tend to hover around MX$700 (US$35) a day, including guides, accommodation and meals. All funds go back to the local community. sierranorte.org.mx