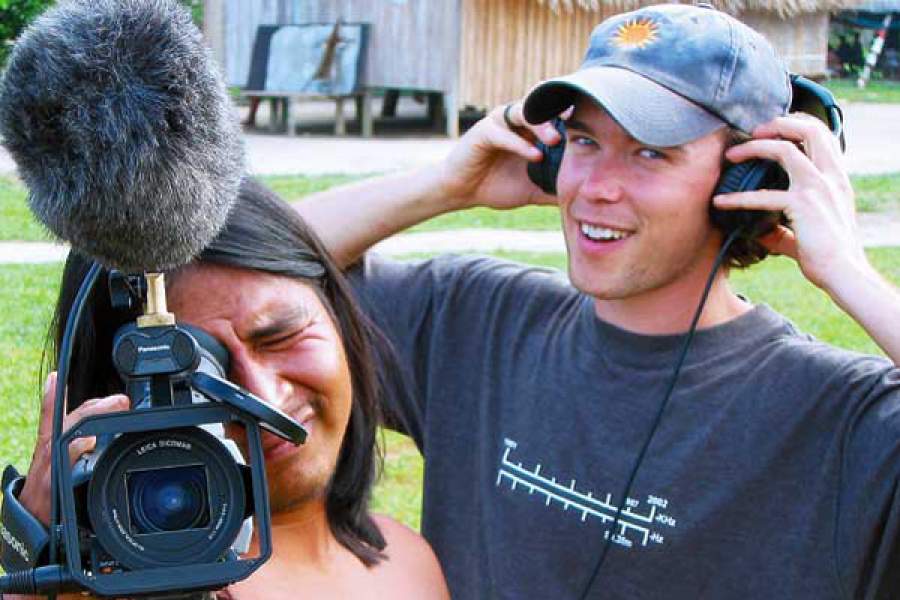 It's not about celebrity; it's about change.

Josh Thome is this year’s keynote speaker at the Vancouver Go Global Expo, September 16, 2012. Meet Josh in person and hear more about the inspiration behind his bold ideas. Visit letsgoglobal.ca for more information.

He's travelled to over 30 countries across six continents, created a popular television show, presented at the United Nations, launched activist networks that have reached millions, rubbed shoulders with actors and rock stars and been honoured by National Geographic as an emerging explorer.

It's not a stretch to say that Josh Thome knows a lot of people.

And what he really wants most is for you to meet some of them, share some ideas and make a contribution.

Thome, 40, is one of the minds behind 4Real, a television show that takes celebrities on no-frills tours to some of the most disadvantaged corners of the globe, throwing them in to the mix and introducing them to local community leaders on the ground.

The program, distributed internationally through National Geographic, has aired in 165 countries in 34 languages.

While people may tune in to see K'NAAN or M.I.A, the real plan is for viewers to get to know Kimmie Weeks, Salim Mohamed and Chief Thaksa Yawanawa.

“The show is not about celebrity,” the Vancouver resident explains.

In fact, the stars knowingly leverage their notoriety to publicize the work of the community leaders who ferry the stars around, often at break-neck speed.

The activists themselves are partners in each episode and half the revenue generated goes directly to the projects being profiled.

The show spans the globe—from the slums of Nairobi and the Amazon rain forest to the drug-ravaged Lower East Side of Vancouver and a block party in post-conflict Liberia— viewers get a raw and authentic view of life through the eyes of residents, community leaders and the visiting celebrities.

“I met people using passion, creativity and commitment to help create a positive world. I saw then that we aren't moved by the winds of change, the truth is that we create them.” In one episode, viewers are introduced to Chief Thaksa Yawanawa, the young leader of an indigenous tribe living in the Brazilian Amazon who left life in the U.S. to lead his community of 600 and assume the guardianship of 90,000 hectares of untouched rain forest.

For the trip, the 4Real team is accompanied by the actor Joaquin Phoenix. Very quickly, the focus shifts from how the movie star is processing his surroundings to the young chief's efforts to protect his community and counter the deforestation ravaging the region.

Leading the visitors through a series of traditional rituals that has Phoenix and host Sol Guy alternately exhausted, speechless and disoriented, Thaksa explains that, to him, the trip holds valuable purpose. He wants the visitors to see his culture and to understand the
effects of deforestation, how the community is able to stem the flow of economic migration by developing local commerce and the importance of preserving the tribe's cultural heritage.

As the visit comes to an end, the guests are visibly moved, their comments less self-aware, less Hollywood. They appear humbled and determined to act on what they've just seen.

It is this type of introduction, Thome insists, that opens up the potential for amazing things to happen.

Growing up in rural Christina Lake, British Columbia, Thome was raised in a world where social and environmental consciousness was both fostered and encouraged.

“I grew up in a cabin in the mountains. It was beautiful. We grew our own food and the only thing we had for transport was a horse.”

In high school, Thome channeled this interest in sustainable living toward the creation of the Environmental Youth Alliance. The group built a membership of 60,000 in their first year.

“It's all about reaching out,” he says. “If you create a basic network, a movement can happen. It's not really about the efforts you make, it's about what can happen if you make that effort. It's about what people can accomplish.”

After school, Thome got a job in California producing a multimedia roadshow with an advocacy group called Youth for Environmental Sanity (YES!),

The group grew rapidly and launched a series of seminars which brought together young leaders from around the world to develop their skills, meet others and exchange ideas.

“I met people using passion, creativity and commitment to help create a positive world,” he recounts. “I saw then that we aren't moved by the winds of change, the truth is that we create them.”

As YES! began to draw media attention and Thome found himself fielding journalists’ questions, he felt that they were not taking the young activists seriously. The group responded by creating its own media.

He started shooting videos that profiled the community leaders around him and through a connection, he convinced REM singer Michael Stipe to host the project.

The film, Connect, was broadcast as part of MTV's 1997 Earth Day special.

“This really got me inspired by the power of the media,” he explains.

In 2001, he met up with the hip-hop artist Sol Guy, a childhood friend. They seized on an idea of using their connections to take celebrities on trips to support dynamic leaders making a difference in the world.

The two friends launched a production company and for the next three years travelled the world gathering video. The footage became a pitch for the 4Real project, which was picked up by CTV, MTV Canada, the CW network and National Geographic.

The show ran for one season but, with broadcasters scrambling after the 2008 global financial crisis, it is currently on hiatus.

So Thome turned back toward the Internet, developing 4Real Flow, a music-based concept intended to leverage the social media power of both celebrities and ordinary people around the world.

“When we were doing 4Real, social media wasn't really around. Today, some artists have bigger social networks than broadcasters do. We have to meet them there.”

People, he insists, can accomplish extraordinary things. “Being aware; being engaged is cool. It just is.” If you don't know where to start, he says, just start. “Raise some money, get on a plane, see the world.”

Josh Thome is this year’s keynote speaker at the Vancouver Go Global Expo, September 16, 2012. Meet Josh in person and hear more about the inspiration behind his bold ideas. Visit letsgoglobal.ca for more information.