You are here: Home/ Travel Intelligence/ Why We Travel/ Passion for Plastic 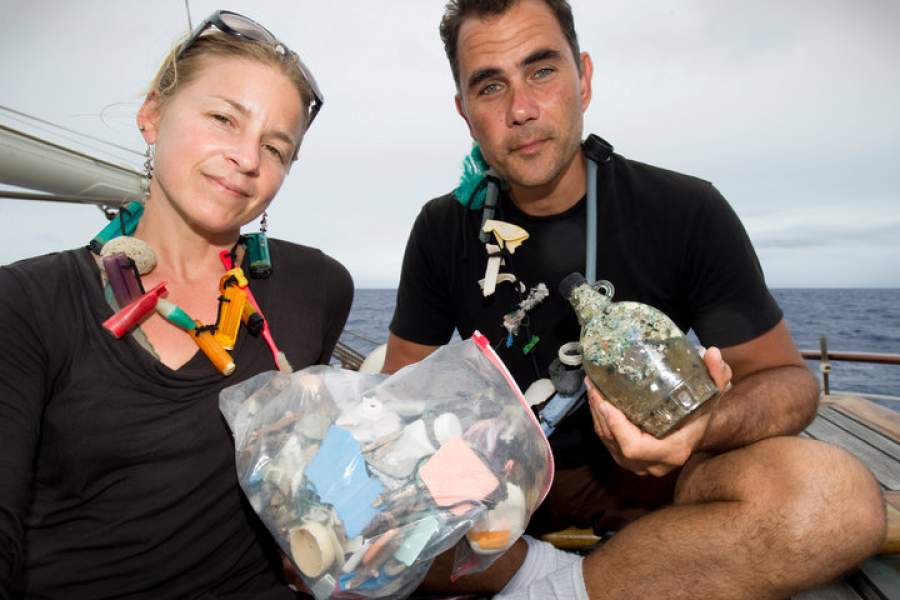 An organization founded in love, the 5 Gyres is researching the world's plastic problem.

Most people don’t follow plastic to its final resting place, but Marcus Eriksen and Anna Cummins do—even if that grave happens to be in the middle of the ocean. Bona fide adventurers, they’ve battled hurricanes, sailed boats made of plastic bottles from California to Hawaii, and invested their honeymoon money into raising awareness about their number-one passion: plastic pollution.

Our ocean footprint was first documented in the 1990s, when Captain Charles Moore discovered the Great Pacific Garbage Patch. Located in the North Pacific Gyre, a circular pattern of currents in the ocean’s basin, the amount of plastic that had accumulated in the patch was the size of Texas.

As more people learned of the patch, questions about plastic and the ocean started floating around. Eriksen and Cummins took it upon themselves to find answers. Together, they founded the 5 Gyres, a non-profit organization that conducts research and communicates about the global impact of plastic pollution in the world’s oceans.

“We began the 5 Gyres because there was no one exploring the other four gyres to see if plastic existed there,” says Eriksen. His interest in plastic began during the first Gulf War. Housed in Kuwaiti ditch, he made a promise to a fellow Marine: if he made it out alive, he would build a raft and sail it down the Mississippi. But when he returned to the States, his foxhole vow was placed on the back burner while he focused on getting his PhD in Science Education.

It wasn’t until 10 years later, when the United States returned to the Middle East for another oil war that Eriksen decided to follow through on his oath. His Huck Finn journey on a raft of plastic bottles down the Mississippi took five months, during which he saw the destructive nature of plastic.

“I could always see trash. It was disgusting,” he recalls. He had finally found a war worth fighting. Eriksen began giving talks at schools and museums and when he arrived in the Gulf, he contacted Captain Moore’s Algalita Marine Research Foundation in California to continue his work.

He first met Cummins at Moore’s 60th birthday party. As a high school teacher instructing a class in environmental policy, Cummins had joined Moore’s research team in Guadalupe after seeing the Captain talk. (“I was blown away: I had no idea there was a massive amounts of trash in the Pacific,” she says.) The pair connected again at an environmental education event and Eriksen offered Cummins a job at Algalita.

“Over that first meeting we sketched our ideal situation; in retrospect it was the beginning of our non-profit,” says Cummins. The 5 Gyres was born and later, the couple began dating. During their JUNKride program, an awareness-raising bike ride from Vancouver to Tijuana, they were married. In the intimate ceremony, Cummins wore a plastic wedding dress.

While the couple’s passion for plastic may seem unusual, their goal is to raise awareness that the pollution affects everyone. Of the nearly 300 million tons of plastic that the world produces every year, more than a third of it is considered “minimal use,” which means it will be thrown away after just a few minutes. Globally, 100 million plastic water bottles are used every day, of which 10 per cent are likely recycled. The 5 Gyres’ research shows that after entering the ocean, this plastic never truly dies, it just accumulates—but not in the large pieces we typically imagine. Instead, plastic disintegrates into microscopic pieces, which chemicals in the ocean bonds to. After birds and fish eat the pea-sized pieces, they’re eaten by larger fish, which are eventually consumed by humans.

“We want to show people wherever we sail that the problem effects them,” says Eriksen. “They cannot say, ‘Well, that’s across the ocean, what does that have to do with my country?” To achieve this goal, 5 Gyres began sailing around the world two years ago to produce the first comprehensive snapshot analysis of the ocean’s plastic.

Their first findings paper, focusing on their 2010 South Pacific journey, will be published in a scientific journal later this in 2012. A paper on the data collected from all five gyres should be published in 2013. This data, once published, will provide a global baseline for future comparisons.

But plastic waits for no one, so even with a baby on the way, the 5 Gyres push on. In April 2012, they held their first Youth Solutions Summit in India and in May 2012, they conducted two voyages through the Marshall Islands and the North Pacific. And so Eriksen and Cummins continue to traverse the globe, chasing plastic and educating others, so that along the way we might change our plastic ways.

About the author: A popular phrase for describing Kat Thomas is Renaissance Woman (which just means Kat’s lucky enough to be blessed with the belief she can do anything that she puts her mind to). A Storyteller: she’s written two screenplays and an existential vampire novel. A Filmmaker: having directed two short films last year, with plans to direct her first feature (a comedy about a pyramid scheme) later this year. A Reporter: having written for the Whole Life Times, ModernMom.com, along with her food blog EdibleSkinny.com.