You are here: Home/ Travel Intelligence/ Why We Travel/ Women on the Edge

Women on the Edge 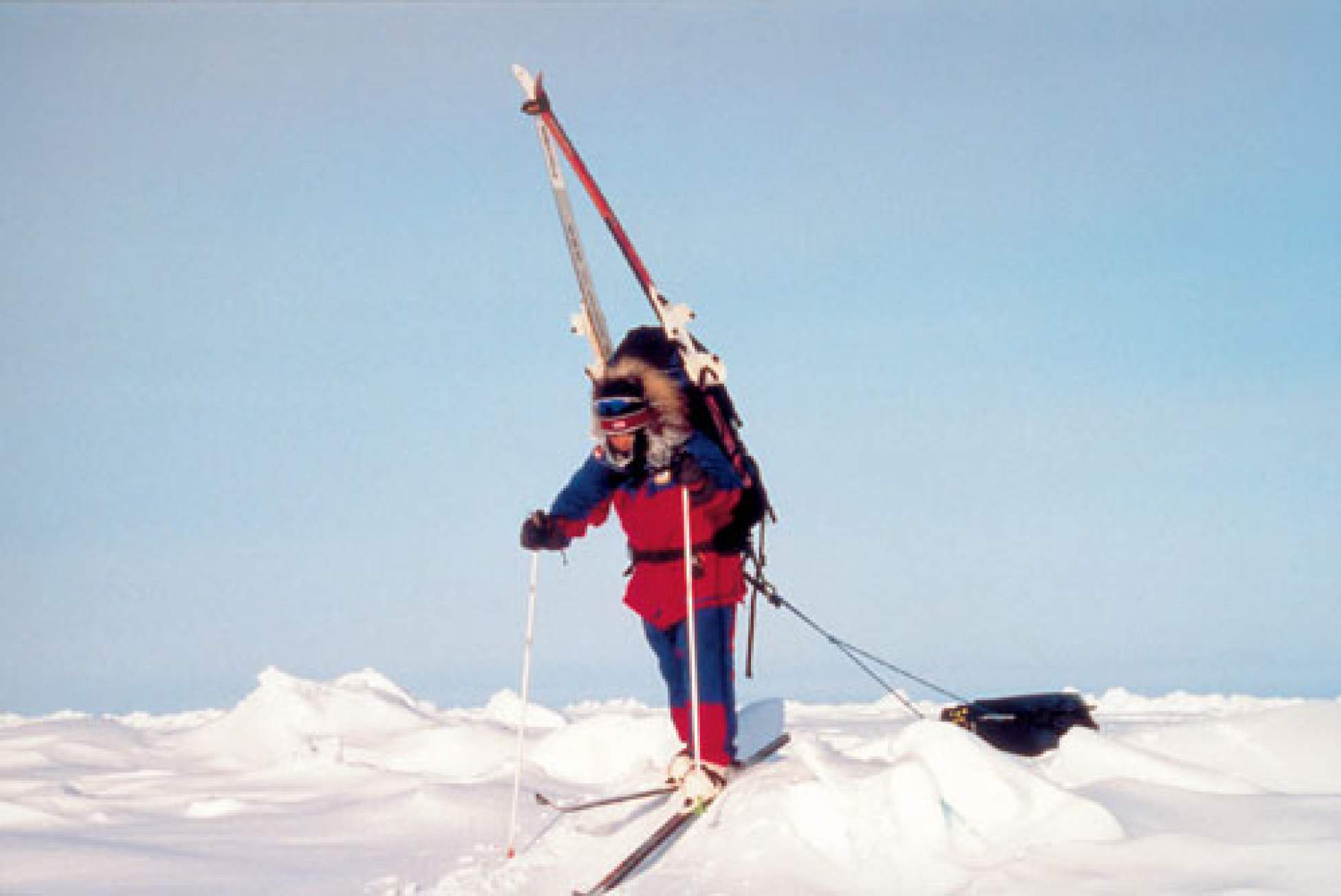 "Mine at last," declared a triumphant Robert Peary on April 6, 1909 as he planted the American flag firmly in the arctic ice at 90 degrees North. Peary's discovery marked the end of 15 years of attempts to reach True North, losing his toes to frostbite in the process. Almost a century later, adventurers are still powerless to resist the magnetism of the North Pole. The idea of travelling over the frozen pack ice of the Arctic Ocean to the northern most confines of the earth titillates the pioneering spirit of a select few each year.

In April 2001, twelve women ranging in age from late twenties to mid-forties were among them. Eight were Americans, four were Canadians and theirs was the first all-female group to ski to the North Pole from Siberia. It was also the first female group to make it the Pole without substitutions.

Michigan State University journalism professor Sue Carter and videographer Frida Waara were the masterminds behind the trek which was designed to "foster in women and girls a sense of empowerment about themselves and their abilities." They recruited a motley group of teachers, financiers, social scientists and journalists to join them in their initiative, which was guided by Canadians Jennifer Buck and Josee Auclair. With fitness levels ranging from Olympic rowing champion to the occasional hiker, training got underway two years beforehand.

"Some of the women were surprised at how difficult the training was," remembered Buck. "When you've always lived a suburban life, you may not have experienced that kind of exertion," she remarked about the schedule which involved skiing up to 80 kilometres a week in the months beforehand. But attitude, rather than physical strength, was finally what defined the group.

"It's not a really hard thing to do," said Buck, whose first thoughts as a teenager when Canadian Richard Weber reached Russia from Canada via the North Pole in 1988 was "I could do that!" Buck grew up in Chelsea, home to a "loose matrix of Arctic explorers and travellers." The 28-year-old Quebecer's initiation to the great outdoors began as a baby when, stuffed inside a backpack, she accompanied her parents on a canoe trip in Gatineau Park. Canoeing and skiing became passions for Buck who guides trips on many of Canada's western and sub-Arctic rivers. In 1999 came her first expedition to the North Pole. Buck was part of a mixed group accompanying 77 year old Jack Mackenzie, the oldest man in the world to ski to the North Pole. She took to the polar ice again in 2001 to help escort the members of Polar Trek 2001 safely to their destination.

The group set out on skis from the 88th parallel in Khatanga, Siberia on April 12th, dragging supply sleds behind them. Previous all-female expeditions had opted for dog sleds to carry them to the Pole. But these women weren't looking for an easy ride. Polar Trek 2001, sponsored by the American educational foundation WomenQuest, was about "ordinary women doing extraordinary things." No substitutions. No re-supplies on route. No second chances. They had 12 days to ski 200 kilometres and two weeks worth of supplies. If they didn't make the Pole within 12 days, they would be unceremoniously picked up by helicopter and taken home. The inevitable drift of the polar ice, floating atop the Arctic Ocean, meant that the actual distance covered would probably exceed 200 kilometres. They would need to ski fast.

No substitutions. No re-supplies on route. No second chances. They had 12 days to ski 200 kilometres and two weeks worth of supplies.

The first day of the trip was fraught with false starts. The team headed off in the wrong direction twice. "We were like 'Wrong Way' Corrigan," said Polar Trek leader Sue Carter, reporting in over satellite phone to the nearby ice station. "It could have happened to anyone," said Jen Buck later, explaining that the GPS (global positioning system) device they used, if left out in the cold too long, would freeze and give a false reading. It was enough to start tongues wagging however. Could these "broads" as one American radio host termed them, really pull it off? More determined than ever to meet their goal, the team pushed on.

The trip continued practically without incident, their progress hampered only by the large number of leads they encountered. Leads are large rifts in the ice filled with open water. They are a common sight at the Pole in summer. Negotiating a way around them, without going too far off track, proved laborious.

Temperatures at the Pole in April range from -19C to -40C but the group was well-prepared. Two pairs of expedition-weight long underwear, a down jacket, arctic boots, wind pants, a wind jacket with wolverine ruffs, a balaclava, beaver mitts, a polar fleece hat and three pairs of mittens—all helped keep the cold at bay.

As they glided in formation over the blinding ice, the only sound to be heard apart from the whoosh of the skis was the occasional thunderous slamming shut of a lead. "It was like an 18-wheeler truck coming up behind me," was the only way Buck could describe the sound produced by the collision of the two-metre-thick ice plates.

Fuel was reserved for cooking only, and gourmet evening meals of pate, cheese, jambalaya, chocolate and crackers were consumed with great relish. As temperatures plummeted at night, the women huddled together, six to a tent in custom-made down sleeping bags.

As the days passed, the drift of the ice and the proliferation of leads led to concerns that they weren't going to make it. With two days to go, on April 22nd, the group still had 21 miles to cover.

All throughout the trip, Polar Trek 2001 maintained telephone contact with school children in Michigan who monitored their progress from the confines of their classroom, wide-eyed and inquisitive. Buck remembers the obsession of the kids with practicalities such as "How do you go to the bathroom?"

As the days passed, the drift of the ice and the proliferation of leads led to concerns that they weren't going to make it. With two days to go, on April 22nd, the group still had 21 miles to cover. The time had come for what Jen Buck called the "48 hour push":

"We did 15 hours skiing, stopping for something to eat and a hot drink every hour on the hour. After 15 hours, we set up the tents and slept for four hours. Then we did another 12-hour push. The whole time over those last two days, it was uncertain whether we were going to make it. Only when we got to within 6 kilometres of the Pole, did we think "we're OK."

The women weren't the only ones in difficulty at that stage. Buck remembers feeling "happy and disappointed" to learn that two Danish polar guides had been caught on drifting ice and had had to abandon their expedition. The "huge ungainly group of inexperienced women" she was leading had succeeded where the others had failed.

The women weren't the only ones in difficulty at that stage.  Buck remembers feeling "happy and disappointed" to learn that two Danish polar guides had been caught on drifting ice and had had to abandon their expedition.

On April 24th, the women arrived, exhausted but elated, at a patch of floating ice which their GPS identified as 90 degrees North. Most people imagine that the North Pole is marked by a flag, a cabin or some equally tangible object. Not so, said Buck who explained that the North Pole, unlike its southern counterpart, is frozen ocean, therefore constantly moving.

"You get to a patch of ice, which looks like everything you've skied on," she said. "Getting there is most of the fun. Five minutes after you get there, because of the ice drift, you're already no longer at the North Pole!"

Buck's first call from the North Pole on the NASA satellite phone was to her grandmother. "She didn't really understand where I was calling from," she said with a chuckle. One of the other team members called a wrong number in Germany. An incredulous German man picked up the phone to a triumphant "I'm at the North Pole!" He thought it was a prank—until he turned on the news.

Looking back on their achievement, over a year later, Buck feels that the most important thing about that trip was that the forty-something-year-old women who dreamt up the trip accomplished their goal:"I think it's awesome that they had the idea and went through with it," she said. "A lot of their contemporaries would have given up."

She's adamant that almost anybody who has the determination to see through two years of training can go to the North Pole: "The most important thing is attitude. Even the weakest, if they have the right attitude, well, it makes it almost irrelevant."