You are here: Home/ Travel Intelligence/ Why We Travel/ The Irrepressible Dr. Jane Goodall 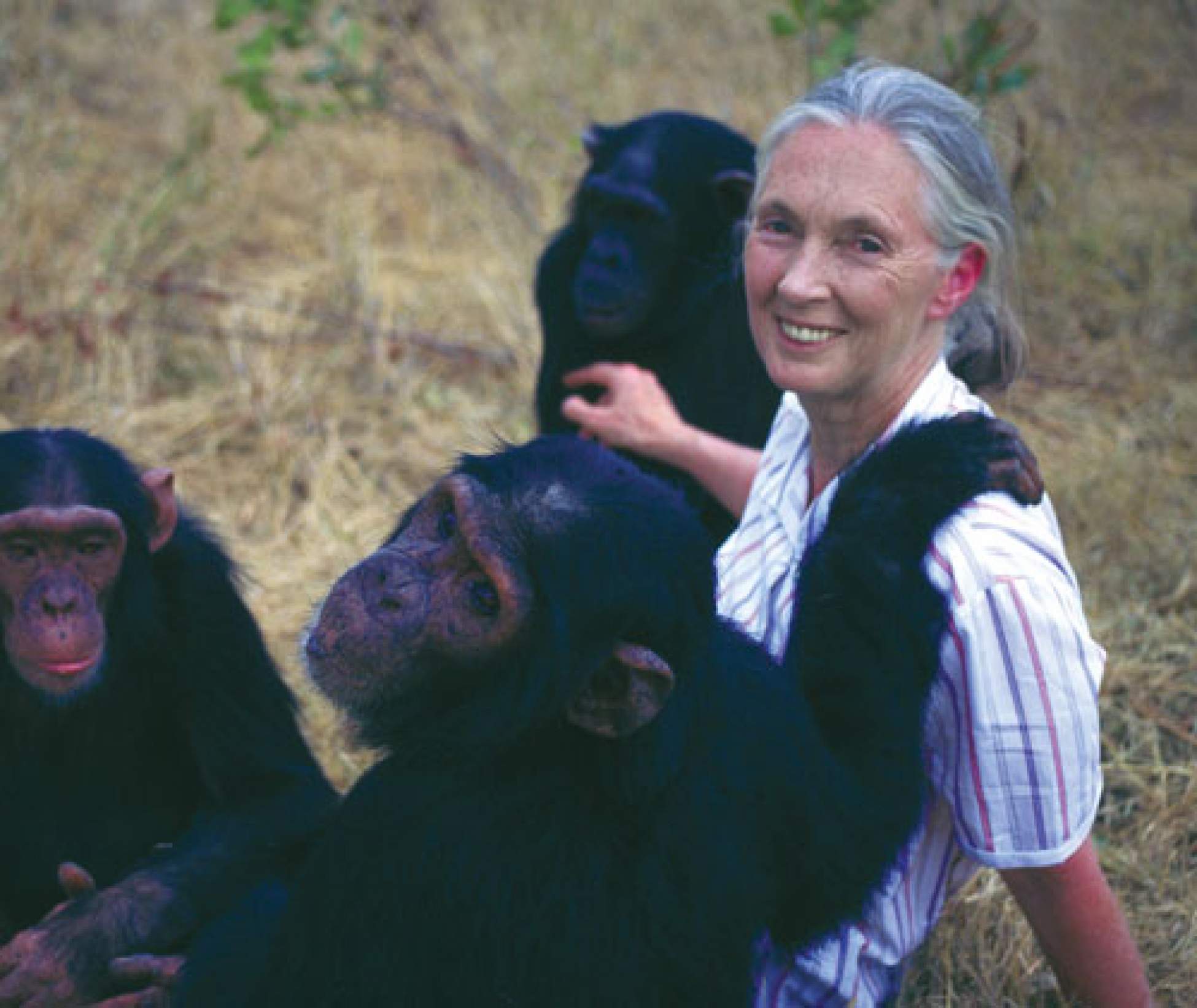 Why is the world's most famous conservation activist so optimistic?

You might think that for an international activist who travels more than 300 days a year, a three-week break would be all about taking it easy.

But not for Dr. Jane Goodall. When the international SARS crisis put a crimp in her lecture, workshop and conference schedule in early summer, the 69-year-old did take time to enjoy the quiet company of her friends and family at home. She also wrote a book.

"Especially now when views are becoming more polarized, we must work to understand each other across political, religious and national boundaries."

The as-yet-untitled short book examines her personal thoughts on the post-September 11 world and could be on store shelves by Christmas.

The issues in this latest book have been on Dr. Goodall's mind for nearly two years, since the World Trade Center attacks of Sept. 11, 2001 led to calls for armed conflict. After the latest war in Iraq began, Dr. Goodall issued a statement that read in part: "Especially now when views are becoming more polarized, we must work to understand each other across political, religious and national boundaries."

Dr. Goodall is best known for her ground-breaking studies of wild chimpanzees and her tireless efforts to promote global environmental conservation. Last year she was named as a UN Messenger of Peace by United Nations Secretary-General Kofi Annan.

"I want to convince people that I really do have hope."

"I want to convince people that I really do have hope," Dr. Goodall says from her home in Bournemouth, England. " I want to show that, although I do know how terrible war really is, and the senseless invasion of Iraq has taken place, that there is still hope."

Turning daunting challenges into new opportunities for herself and others has been a trademark of Dr. Goodall since her earliest days. Encouraging these traits, Dr. Goodall's mother gave her some advice that the activist passes on to young people every chance she gets: Don't let other people laugh your dreams out of you.

"My mother told me that if you really want something, and you work hard, and you take advantage of every opportunity, it will work out for you. Maybe not directly, in exactly the way you'd anticipated, but it will work out."

While in high school, Jane Goodall wanted, more than anything, to go to Africa and study animals. But at that time, the only way to get there was on a university scholarship. Her family, being of modest means, could neither afford to send her to university nor could they pay for a ticket overseas. Instead, at her mother's urging, she went to secretarial school and learned shorthand and speed writing—not exactly a straight shot to conservation work on a wildlife reserve.

But some years later, Goodall had saved enough money to take a friend up an offer to visit her in Kenya. Once there, her secretarial skills landed her a job with the famous anthropologist and paleontologist, Dr. Louis Leakey on one of his fossil-hunts in East Africa.

Dr. Leakey encouraged and mentored the 26-year-old Jane. With his help, and despite the reservations of the British authorities about a young British woman going into the African bush alone, she got permission to undertake a field study of a chimpanzee population in Gombe National Park on the shores of Lake Tanganyika in what is now Tanzania.

So, her mother's urging was prescient. Straight shot or not, Jane found herself in the thick forests of East Africa were where she had yearned to be since she was a youngster in England.

That first, short chimpanzee project was a turning point for Jane, and for the study of wild chimpanzees generally. With no formal zoology training, she did what she has always done—devised her own way to tackle the project, based on a fundamental respect for the living creatures she wanted to learn about.

It worked. Jane came away from that first chimpanzee study with unprecedented observations about chimps using tools, hunting bushpigs, and other behaviour that had been considered out of their "intellectual" reach. National Geographic got hold of the story and, suddenly, her work was in the spotlight and Jane Goodall became a household name.

The opportunity to do field-work in Gombe also convinced Jane that she should get a formal education in the type of work she had sampled in Tanzania. After earning her Ph.D. in Ethnology from Cambridge University, she returned to Tanzania and continued her research.

These days Dr. Goodall doesn't get to spend as much time in the field as she would like. Much of her time as an activist is spent travelling around the world, speaking about environmental responsibility and conservation issues. In her role as UN Messenger for Peace she is also speaking out about the need for global peace initiatives, and international understanding.

Dr. Goodall's newest book draws from the same deep well of optimism that convinced her to write Reason for Hope. That spiritual autobiography imparts reasons for her confidence that human beings will find ways to make the world a safe place for us all, despite the terrible things she has seen people do to their environment and to each other.

Her optimism rests in her belief that young people have the power to create change, and that the future of the world lies in their hands. It's a theme that has flavoured her life and activism for decades.

In 1991, Dr. Goodall and a group of students in Tanzania sat near the shores of the Indian Ocean and decided that they wanted to do something to address many of the problems they were seeing around them and throughout the world. What grew out of the discussion was an environmental and humanitarian programme for young people—the Roots & Shoots programme.

At present, there are more than 5,000 groups in some 70 countries, all focused on community service, global networking and hands-on learning. Members all over the world take on projects that foster care for the environment, for animals and for the human community.

This year, on September 21, to mark the United Nations International Day of Peace (called Peace One Day), Roots & Shoots groups will be constructing enormous peace doves from recycled materials. The first giant dove was designed by a Wisconsin artist to commemorate Dr. Goodall being named a UN Messenger of Peace.

If you happen to be at the UN headquarters in New York that day, as Dr. Goodall plans to be, you will see one flying. If you find yourself in Baghdad, East Timor, along the Great Wall of China, or on Mount Everest, you'll see them there too.

Much of the Roots & Shoots agenda is concerned with public education. A firm believer that being well informed is a tool to promote peace, Dr. Goodall plans to slot in a short lecture tour this fall to visit several community colleges in the Southern United States. It's still in the planning stages, but these college visits will give her a chance to explain the realities of war to people who have largely supported the U.S. military campaigns of the last two years.

"No one I know in America supported the [Iraq] war. The support seems to have come from certain areas, places where they get no independent information other than what the Administration wants them to hear."

"No one I know in America supported the [Iraq] war," she says. "The support seems to have come from certain areas, places where they get no independent information other than what the Administration wants them to hear. I'm looking at gathering a whole collection of people to go down there and tell them differently."

Dr. Goodall turned 69 this past April. She has a wall full of honourary degrees, and significant awards that include the Ghandi/King Award for Non-violence, Japan's Kyoto Prize and National Geographic Society's Hubbard Medal "for her extraordinary study of wild chimpanzees and for tirelessly defending the natural world we share."

Recently, she was given the title Dame of the British Empire (in effect, a Knighthood). She has not stayed in the same location for more than three weeks since 1986. What keeps her going?

What keeps her going, she says, is the knowledge that she has something of a mission in life, which is to inspire, and be inspired by, young people.

"Young people write to me and tell me that they now believe they can make a difference. I meet amazing, inspirational people all the time through my work with Roots & Shoots. I see their bright, shining eyes. There is a great spiritual power there and I believe I derive strength from that. It's a two-way street."

Just as a single chimpanzee can influence its entire colony's eating habits by using a piece of stiff grass to gather termites, or invent a new game that its entire group enjoys for generations to come, individual humans can make long-reaching changes, Dr. Goodall says.