You are here: Home/ Travel Intelligence/ Why We Travel/ Searching for Ghosts in Hungary

Searching for Ghosts in Hungary 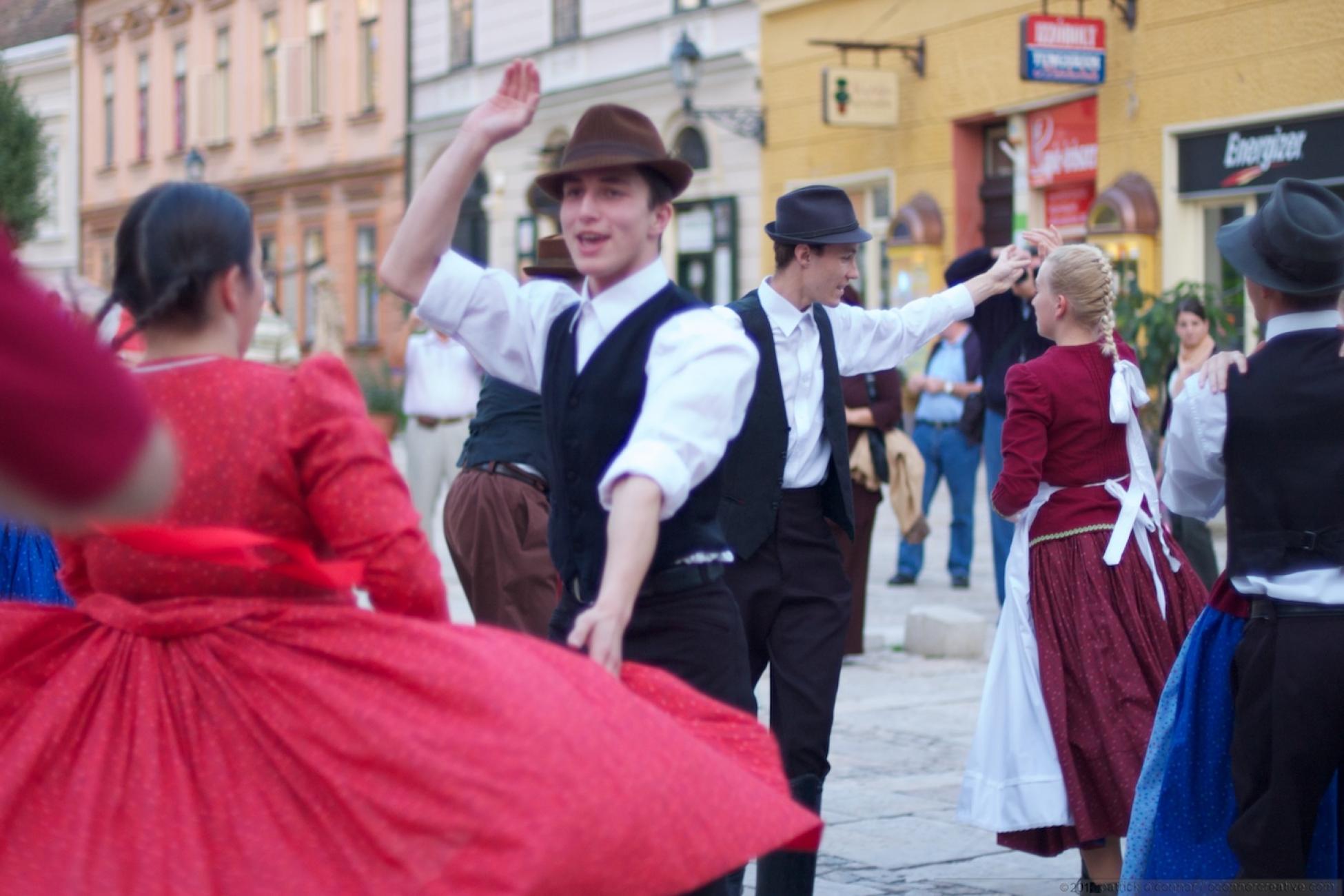 A professor working abroad falls in love with a place she didn't want to like.

We’re sitting in the principal’s office at the middle school Apáczai Nevelési Központ, or ANK for short. It’s August 2010 and we're in trouble. Along with my husband, Pat, and our 14-year-old son, James, I’m in Pécs, Hungary as a Fulbright professor,

For months, I emailed back-and-forth with another principal at another school, but when we met in person, she decided James didn’t know enough Hungarian. So, she sent us to the ANK—where all students study English—to this principal, an older woman wearing a buttoned-up dress, shaking her head, saying nem.

Is she saying no because she won’t let James attend her school? Like the last principal?

“Sajnálom, nem értem. I don’t understand,” I say, using one of the few Hungarian phrases I know.

Right now, I’m seriously questioning the wisdom of coming to Hungary. My Fulbright proposal was titled “Leaving Pécs.” And here we are struggling to get in.

Still frowning, the principal folds her arms and repeats, “Nem.”

Maybe we should have dressed better.

Pat and James are seated beside me, wearing khaki shorts and collared shirts. I’m wearing a wrinkled blue dress. That morning, we walked to the market, where we were the smiling Americans in running shoes. The ladies chopping cabbage for sauerkraut smiled when Pat and James took their pictures.

Everywhere we look, we see ”Need?” spray-painted in black or red on the walls of city buildings. We don’t know what the graffiti means. Maybe it’s a question to consider: what does one really need? All I know is that we need to find a school for James. Today.

Even though it’s very much alive, Pécs, Hungary has a tombstone in the Valley of Communities at Yad Vashem, the Holocaust Museum in Jerusalem. It’s among the 5,000 Jewish communities in Europe that were destroyed or barely survived in the Holocaust. In the spring of 1944, Hungarians and SS officers rounded up over 4,000 Hungarian citizens because they were Jewish. These citizens were deported to Auschwitz, Mauthausen and other concentration camps. I am here on a Fulbright to teach at the university and to research who in my family were among the murdered.

At a Fulbright language class in Budapest, Pat, James and I learned as much Hungarian as we could. We had never been to Hungary. We learned that to pronounce “magyar”—the word for “Hungarian”—it helps to think of the word “endure.” We learned what to say when you bump into someone: Bocsánatot. We learned what to say for no problem: Semmi baj. We learned to say we’re sorry when we don’t understand: Sajnálom. De nem értem. I’m so sorry. But I don’t understand. Our language instructor is a kind woman who asks us to repeat over and over. Sajnálom. De nem értem. Sajnálom.

In a week, I’ll begin teaching literature of the American South, the contemporary American novel and creative writing at the University of Pécs. I’ll also begin to research my mother’s family, who lived in Pécs beginning in the 1700s. My focus is on one man, Richárd, my great uncle, born and raised down the street from where we sit now.

I admit I'm paranoid. I don’t want to like Pécs—or Hungary for that matter. The new right-wing Prime Minister Viktor Orbán says he wants to abandon liberal democracy, preferring something akin to Russia. He also wants “to keep Europe Christian.” The rising political party, the Jobbiks, organize anti-Semitic demonstrations in Budapest, defacing synagogues with spray-painted swastikas. History looks to be repeating itself, and here I am, dragging my husband and son into the fray, researching my Jewish relatives, most of whom were murdered in the Holocaust.

The Fulbright promised us fear and joy, and here we are, waiting for the joy part to kick in.

In my Fulbright proposal, I wrote that I had no idea what I would find in my search for family. I only knew that it was important for me and for a nation to remember. I also wrote that because I was looking for my dead relatives, I wanted my living family—Pat and James—with me. I quoted Eudora Welty, a fellow Mississippian. Before she started any writing project, she held it to a standard: “This story promises me fear and joy and so I write it.”

The Fulbright promised us fear and joy, and here we are, waiting for the joy part to kick in.

Sitting in front of the principal at ANK, I can’t help but wonder, were any of her people involved in Richárd’s arrest? Will she and others be angry that we’ve come to uncover the truth about our history and Hungary’s role in the Holocaust?

A sudden smile spreads across the principal’s face as her door opens. Pat and James stand to help another woman carrying a tray of coffee and apple strudel.

“I’m Betti,” the woman says, laughing, clearing a space on the principal’s desk. “My friend here can’t speak a word of English and I’m here to translate.” She cuts through the strudel and serves James a generous slice. “Now, young man. You’re a native English speaker who can help my other students.”

James sits taller in his chair.

“Welcome to our school,” Betti says.

As we stand to leave the principal’s office, Betti touches Pat’s arm. “And you’ll be teaching English for us, too?”

Pat, who shuttered his advertising and marketing business in Indiana to come to Hungary, has never taught English as a second language.

We three look at each other for one long moment.

The past is very present

In the following months, we get to work, studying and teaching. Every few weeks we travel to Budapest and other Hungarian cities. Teaching at the university, my students discuss the similarities between the American South and Hungary.

“They both lost big wars,” one student tells me. “They both carry around a lot of guilt over the past."

We indulge in Kürtökalács, pogácsa, and Tejkaramella candy and we learn to order our favourite dishes in Hungarian restaurants. We learn that when Hungarians introduce themselves, they say their surname first. Their first identity belongs to family. We say “I” less and less in Hungary, maybe because we’re realizing we’re merely part of a bigger picture. The three of us grow closer and more in sync.

In December, Pat, James and I host a farewell gathering called “Southern Night.” The cabbage ladies at the market help Pat find ingredients to make a Hungarian version of his jambalaya for 150 colleagues and friends from the university and the ANK school. Betti and the principal come too.

We feast together and then watch To Kill a Mockingbird. When we turn up the lights in the room, we stay on late into the evening talking with our Hungarian friends about how hate spreads. Betti says she can’t understand the KKK and how one ethnic group can hate another. This is when I could throw history up and remind her of what this country did to its own Jewish citizens in 1944. But I think of all that she has done for James and for us and I know it will only hurt her feelings. Instead, we discuss civil rights, democracy, diplomacy and occupying forces.

I never expected to feel what I feel about this sun-drenched town surrounded by Roman walls. This town—this country—kicked out our ancestors, and had most of my family murdered for being Jewish, after all. But then we three return, and, within months, the town embraces us and we fall in love with Pécs. Hard. It doesn’t make sense. But this journey didn’t either.

We came to find ghosts in the cradle of our ancestors. We left with friends and so much more. Sometimes the dead lead us to the living.

Margaret McMullan is the author of several books, including the newly released memoir "Where the Angels Lived: One Family’s Story of Exile, Loss, and Return." Follow her on Twitter @MargaretMcMulla.