You are here: Home/ Travel Intelligence/ Why We Travel/ Are We Saying Goodbye to Madagascar's Lemurs?

Are We Saying Goodbye to Madagascar's Lemurs? 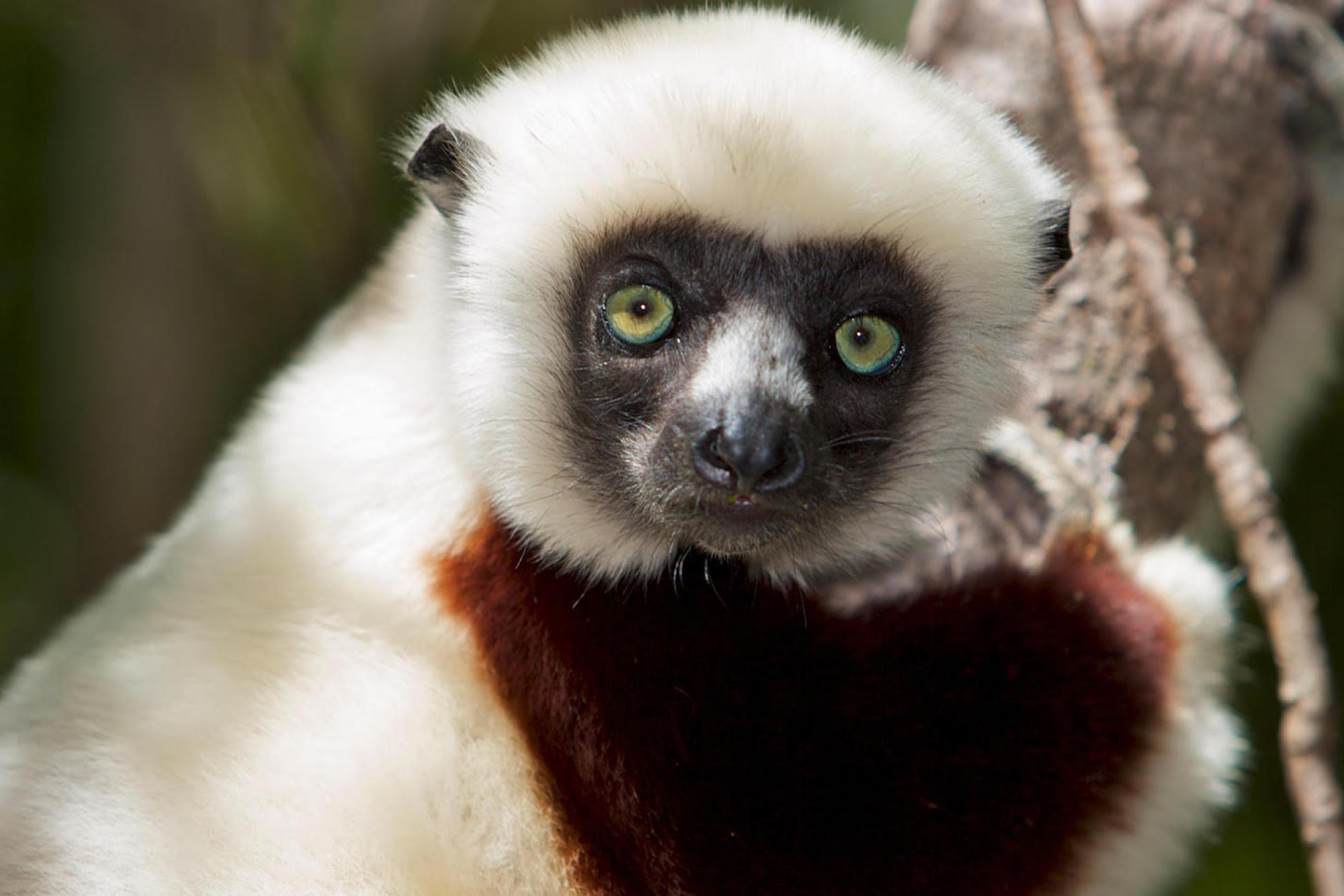 In an impoverished nation, conservation is not always top-of-mind.

Maybe today the lemurs will be easier to find.

Grabbing my hiking boots, I give them a shake to ensure they’re free of scorpions.

This was northwest Madagascar in 2008. No access to Internet, no cell phone reception—just me, my field team and, for 14 months, the lemurs.

For my PhD at the University of Toronto, I was studying an endangered lemur species in their natural habitat. My research focused on how forest edges—the transition zones between forest and non-forest—impacted lemur behaviour and ecology. Could lemurs survive in the face of extensive habitat loss?

The situation back then was worrying. The International Union of Conservation of Nature estimated that 41 per cent of lemurs were threatened with extinction. It's a status that has only worsened since. In August 2018, the IUCN Species Survival Commission Primate Specialist Group reported that of the 111 lemur species found only in Madagascar, 105 are now critically endangered, endangered or vulnerable to extinction. That is a whopping 95 per cent.

It’s a call to action: If lemurs go extinct in Madagascar, they are lost to the world.

A world unlike any other

I hear my field assistant, Lanto, quietly getting organized. I strap my binoculars to my belt, don my daypack and, leaving our camp in the trees, hike with Lanto up a small hill to a wide trail that I refer to as “the lemur highway.”

We meet up with our local guide, Zama, and the three of us begin our trek deep into the dry deciduous forest. We are bent on locating and following a group of Coquerel’s sifaka, an endangered lemur species found only in these northwest forests.

The Coquerel’s sifaka (shee-fok-ahh), which I had travelled halfway around the world to study, belongs to the endangered 95 per cent. Sifakas belong to one of the most unusual of all primate families, thanks mainly to their unique vertical clinging-and-leaping style of locomotion. Sifakas use their powerful back legs to propel themselves, clearing 10-metre gaps in the canopy with a single bound.

If lemurs go extinct in Madagascar, they are lost to the world.

While such primates are extraordinarily graceful in the treetops, silently bouncing from tree-to-tree like pinballs through an arcade game, on the ground they become more than a little awkward. Their long, bow-shaped hind limbs compel sifakas to jump bipedally, shuffling along with their arms above their heads in what has affectionately been nicknamed the “lemur dance.” That dance is one of Madagascar’s biggest tourist draws.

However, the sifaka population is only a small fraction of what is at risk of being lost. The island nation of Madagascar is a world unlike any other. Situated in the Indian Ocean, it has been separated from mainland Africa for at least 130 million years. As a result, evolution has occurred there in a microcosm. More species are endemic to Madagascar than to any other country. The island combines record levels of endemism with astonishing diversity. Visit Madagascar and you’ll find an impressive 14,000 species of plants, 21 reptile lineages, five families of birds and, of course, Madagascar’s main claim to fame—111 species and subspecies of lemurs, none of which are found anywhere else.

This high level of biodiversity and endemicity is marvellous, but it also means that threats to these species and their habitats could have huge implications. And, unfortunately, Madagascar has experienced extremely high levels of habitat loss due to farming, mining and deforestation. A study published in Biological Conservation estimates that between 1953 and 2014, Madagascar lost 44 per cent of its natural forest cover, with 37 per cent of that loss taking place after 1973.

Conservation International points out that because of the country’s combined diversity and endemicity, “a hectare of forest lost in Madagascar has a greater negative impact on global biodiversity than a hectare lost almost anywhere else.”

“It gets into your blood”

About two kilometres in, at the fork in the trail, we nod at one another and split up. We need to check the known sleeping sites—any tree that is big and sturdy, and especially trees that are in fruit. These are the spots where we might find our group of sifakas.

As I walk on my morning commute, the sun is starting to peek out from the forest canopy. I can hear forest creatures waking. The call of an endemic sick-billed vanga sounds like a baby crying.

Ten minutes pass. Then 15. The lemurs are nowhere to be seen. I start to worry. Is today going to be a day where the lemurs have gone somewhere unknown to us—or worse, a day where we walk right past them and fail to notice they are there?

I can see the sun starting to rise and I can feel the temperature shifting from the cool morning breeze to hot and sticky. And then, a crackle on my handheld radio. Lanto’s voice coming through.

My heart leaps. Can this be it?

The sifakas are there!

Even though it was hard sometimes, when I lived in Madagascar we could almost always find our lemur groups, thanks to dozens of government-created protected areas. But now, I hear firsthand accounts from other researchers that the groups of sifakas I used to follow have disappeared from the forest.

Two months after my research season ended in November 2008, Andry Rajoelina, the mayor of Antananarivo, announced a coup to overthrow the president. Since then, I have watched as Madagascar has floated in and out of international newsfeeds. The island nation has seen outbreaks of the Bubonic Plague, locust infestations, devastating cyclones, illegal resource harvesting and violence. But the negative news tells only part of the story.

All hope is not lost. Madagascar is a world of beauty and wonder, with astonishing wildlife and remarkable people. Before I visited for the first time, my PhD supervisor told me that this is the kind of place that compels you to go back again and again.

“It gets into your blood,” he said.

He was right. I have been drawn back to Madagascar repeatedly. I completed my field research in 2009, and to celebrate completing my degree in 2011, I travelled to Madagascar. This time, I went with my partner, fellow primatologist Travis Steffens, to help collect data for his PhD research on the impact of habitat loss and fragmentation on lemurs living in and just outside of Ankarafantsika National Park.

During my time in the country, I was affected greatly by the plight facing lemurs. But the more time I spent in the country, the clearer it became that the threats faced by the lemurs are strongly connected with the struggles of the human population.

It’s hard to fault people for burning forest or cutting down trees when they are doing so to feed their families.

Although it may seem easy to blame humans for forest loss, the situation is complicated. With a population of 25.5 million, Madagascar is one of the poorest countries in the world. Of the 16 million people who live in rural areas, some 85 per cent live below the poverty line, often relying on tiny plots of farmland for survival, and subsisting on less than two dollars a day. It’s hard to fault people for burning forest or cutting down trees when they are doing so to feed their families.

We realized that we could not stand by and watch as the lemurs became extinct and people died. After we got back to Canada, we launched a non-profit organization, Planet Madagascar, which now runs several projects, including a conservation education program, a continual forest monitoring and fire management program, a forest restoration program, and a sustainable agroforestry initiative.

Even though I now work mostly from my home office in Toronto, I know I will be going back to Madagascar soon. Occasionally, I run the math. Less than 24 hours—that is all I need. A 19-hour flight and a four-hour drive would find me watching in Indri in Adasibe-Mantadia National Park.

At six kilograms, Indri are the largest of all living lemurs. Their haunting call is matched only by their hilarious appearance. Think of a four-year-old in a panda suit.

I can see it now: I will hire a professional guide to take me to the farthest possible group of Indri, away from the other tour groups. I will find a comfortable patch of ground, sit myself down, and pull out my binoculars. Then, I will wait for the otherworldly, whooping songs, high-pitched but guttural. As a primatologist, I know that the call is meant to establish group spacing. But the conservationist in me can’t help but wonder if the Indri are crying out for the world to hear, and if theirs isn’t a call to action.

• Start by exploring the Lemur Conservation Network, a hub for over 60 organizations working to save lemurs from extinction. You’ll find volunteer opportunities, some of which you can do from your home, such as donating your skills in web design. Organizations can also use monetary support, and a little goes a long way in Madagascar. (For example, a $10 monthly donation to Planet Madagascar would help us continue our fire management and sustainable agriculture programs in the long-term.)

• Finally, you can participate in responsible travel. Ecotourism can provide an economic incentive for rural communities to protect lemurs and their habitat. Planet Madagascar’s executive director, Travis Steffens, will be leading a tour with Civilized Adventures in May/June 2020.

This article originally appeared in Volume 19, Issue 2 of Verge Magazine.

Keriann McGoogan has a PhD in biological anthropology from University of Toronto and spent 14 months living and working in Madagascar studying lemurs. She is the author of the forthcoming book, Chasing Lemurs, Prometheus Books (April 2020).