You are here: Home/ Travel Intelligence/ Editor's Desk/ To stay or not to stay?

To stay or not to stay?

Should more gap year travellers and people taking a career break spend their time off volunteering at home? 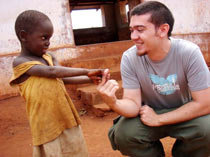 A British think-tank called Reform Scotland thinks so, according to this news piece from the Year Out Group. The group recommended a "stay-at-home initiative" that would encourage gappers to involve themselves in local charity work instead of going overseas. The piece also noted that last month, London mayor Boris Johnson encouraged gap year students to do the same.

While the importance of contributing to the well-being of your home country shouldn't be ignored, we have to wonder if discouraging gappers from travelling is a good idea. Travelling abroad - especially to contribute to a volunteer or work-related project - is an invaluable, enlightening and character-building experience for every person who undertakes such a journey.

In particular, being exposed to another culture for an extended period of time and working alongside locals from another region offers an opportunity to become a more socially conscious, broad-minded person. And upon returning to your home country, you can use your new experiences, skills and understanding of the world to improve your own community.

Ideally, individuals would not limit themselves to just volunteering at home or overseas. And organizations would not try to recruit potential at-home volunteers from those looking to expend their efforts overseas, but from the population as a whole.

What do you think? Would you support an initiative to keep gappers volunteering at home? Let us know!

Zalina grew up in Toronto and began her career in journalism at the York University campus newspaper. Before joining Verge in 2010, she worked for a documentary festival, a non-profit organization and various magazines and newspapers. Zalina has had some eclectic travel experiences, including reporting for a newspaper on the island of Molokai in Hawaii.