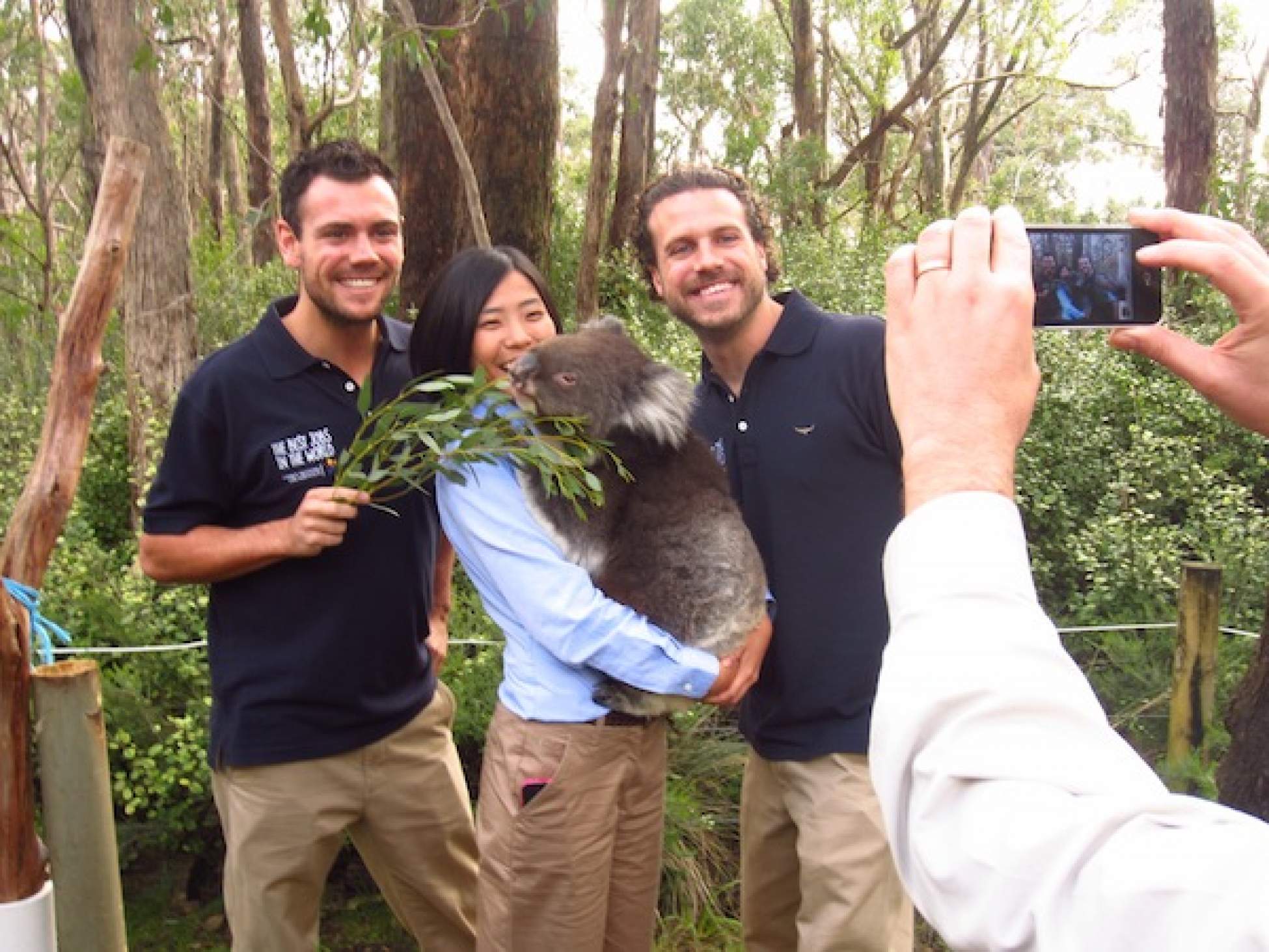 Handling pythons, swimming with sharks and wrangling media—to some, this might sound terrifying. But for Canadian Greg Snell, it’s one of the best jobs in the world.

“I’ve always loved animals,” Snell explains. “I’ve never been afraid of interacting with wildlife and I’ve always been looking for that connection.

The winner of Tourism Australia’s “Best Jobs” competition, Snell will be moving to South Australia in December for six months to help promote the country’s Working Holiday Visa program. But before he landed the coveted role of “Wildlife Caretaker,” Snell had auspicious beginnings as a tour leader for G Adventures. Sharing Verge’s value of “travel with purpose,” Snell spent nearly four years working with the company in South America, Central Asia and Africa, winning awards for top sales in the process.

One morning shortly before his big win, Snell sat down with me over breakfast in Adelaide to discuss what life as a group leader is like—and his tips for how to land the top tour guiding jobs.

What made you decide to pursue work as a tour leader?

When I was about 21, I started an adventure tourism program in Golden, BC at the College of the Rockies. We were asked in our management class to do a profile of a company that we would want to work for, so I did a case study on Gap Adventures [now G Adventures].

That’s when I got an idea that [G Adventures] is really the only adventure tourism company that has a focus on sustainable tourism and development—and believes it. They don’t just greenwash the term “social responsibility.” They actually have the actions in place, including having carbon offsetting and Planeterra, [G Adventure’s foundation arm, which raises money for the communities where they operate], as well as running tours that focus on local operators.

There’s a lot of people who would love to become tour leaders. Apart from your education and experience, what made your application stand out?

At the time, I was—as I am now—really ambitious. That was the job that I wanted and I was gunning for it. I was doing everything in my power to get hired by that company. I actually walked into the head office and asked for an interview, which is not normal. I was maybe one of only a few people who had probably ever done that before.

What would be your top advice to somebody who is looking for a job tour leading?

Bilingualism is huge. It’s absolutely necessary. You have to have travelled. Most people will not even look at your resume if you haven’t been to the location that you’re applying for. And have an understanding of the company’s values before you apply. If you’re in it for the free travel, that’s great, but it’s more than that.

When you first started group leading, what was the biggest mistake you made?

At the very end of my first trip, I told my group that it was my [first time guiding]. I don’t think that was a mistake, but I think it changed their perception of me immediately.

I think maybe being too babysitter-ish. You know, always asking, “How are you? Is there anything I can get for you?” After being a tour leader for a couple of years, you realize that these people are adults. They have professional lives, they don’t need to be patted and rubbed down. They’re there to travel.

After the day is done, there’s also a social aspect to guiding jobs. Do you feel any pressure from your clients to drink?

At a young age, I got over [drinking] pretty quickly. As a tour leader, it’s pretty much impossible to do. Part of being a tour leader is drinking, for sure, but in a controlled, professional manner.

What do you think the biggest misconception that people have about tour guides or tour leading?

That they’re players—I think that’s a huge misconception. If we get caught sleeping with passengers, we get fired immediately.

So what’s it like maintaining relationships while you’re on the road?

Impossible. Through social networking, I’ve created a life for myself that doesn’t actually require my presence. My relationships back home are all about Skype, photography, Twitter and Facebook.

However, keep in mind that I’m a Canadian, tour leading in South America. There’s a lot of South American tour leaders who go home every month and a half or so, so for them it’s a very different story. But for international tour leaders, there’s a disconnect from friends and family. You have to be able to say goodbye for an indefinite period of time and live on the road.

Speaking from my own experience group leading, there’s an element of consistently being cognizant and self-aware that you’re in this role. Do you find it exhausting always being “on”? How do you deal with that?

I don’t find it exhausting, but I do create personal time for myself on a daily basis. It is impossible to work for 24 hours. I create three to four hours for myself, usually in the afternoon, to have a nap or answer emails or edit photos, or watch a movie—anything to myself. You turn off your work mode and turn on your home mode.

You’ve mentioned that you always unpack when you get to a hotel room. Why do you do this?

As cheesy as it may sound, I like to make the room feel like a little piece of “home.” Unpacking and laying out my stuff as soon as I arrive immediately makes the room feel more like an apartment and less like a typical hotel room. It also allows me to always have a sort of mental itinerary of what I have and where everything goes when it’s in my pack. I can unpack and repack my life in less than 10 minutes.

What are five things that can always be found in your bag, regardless of location?

A book, my harmonica, laptop, camera (and lenses), and my passport.

What would your be advice to tour leaders who are just starting out?

You get to know people really quickly and if you listen to them and portray that you really do care. Be open. They’re there for the experience.

Realistically we’re talking about a job here. Is it worth the money?

What qualities or traits make for a successful international tour leader?

Crazy, adventurous, ambitious and confident—somebody who is a true at heart nomad, who wants to travel the world.

I think that international, long-term tour leaders tend to be humble and down-to-earth—somebody who really cares about somebody else’s experience. Somebody who is it in it for the long run for the changing of people’s lives.

It’s the idea that I can be a part of your experience and your vacation—and that’s really lucky. I think for a lot of tour leaders, it becomes more than a job, it becomes a lifestyle. It becomes about the people.

Verge welcomes Greg Snell as our latest “From the Field” blogger. To read more about his personal journey working abroad in South Australia, visit his blog.