You are here: Home/ Travel Intelligence/ Beyond the Guidebook/ Study, Work and Volunteer in Extreme Environments 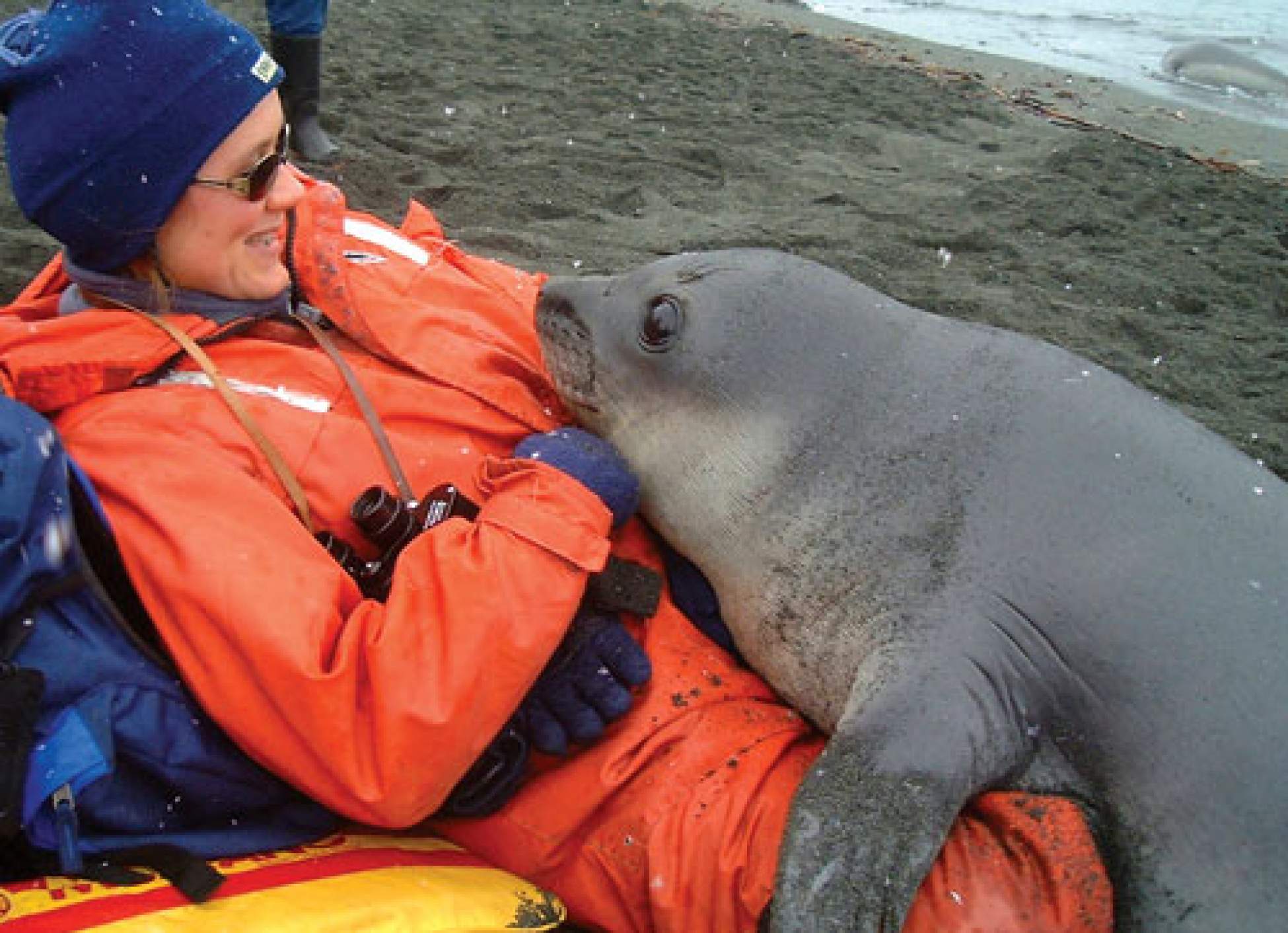 The lowdown on studying, working and volunteering in the world's most geographically extreme environments.

Travel troubles are sometimes to be found in the unlikeliest of places. Just ask Robert Young Pelton: he survived an Indonesian plane crash unscathed, but once managed to lose all his luggage from his locked vehicle—parked outside the Vatican. You are probably more likely to die running with scissors than die of SARS, and skateboards are statistically much more dangerous than sharks. So really, when it comes to taking risks, it's a matter of taking your pick.

A good traveller is an educated traveller, so we've compiled some top adventure destinations and some crucial local knowledge for you to take on your journey. These are the most climatologically and geographically extreme environments, where you'll come face to face with the worst (or most distant) lands that Mother Nature has to offer, but often less in the way of human danger—at least, statistically speaking.

Perhaps, the last refuge on earth where wildlife can look humans in the eye unafraid, Antarctica is home to four kinds of lichen, 8 species of whale, 6 types of penguin and 32 million cubic kilometres of ice. It is impossible for visitors not to be moved—the last great wilderness is one of the most beautiful places on the planet. An unparalleled geography of sculptured ice and abundant life gives a glimpse into what the world may have been like before we etched our mark so forcefully.

While our species has waged war on this continent since we first set foot here, so far the continent has won. There are still no permanent residents—even scientists rarely brave more than a couple of winters. Massive sealing, whaling and fishing operations—which drove some species to near extinction—have all but ceased.

Today, however, Antarctica is contending with what is perhaps its greatest threat of all: global warming. The implications of Antarctica's disintegrating ice shelves are far from certain—but they do have potential to affect the planet as a whole. The recent collapse of the 3,250 square kilometre Larsen B shelf suggests that the process is occurring more quickly than scientists had hoped.

More and more people are making the journey to experience this place firsthand. Today, it is hoped that tourism may be one human activity that contributes to the conservation of this amazing corner of the planet. This trip of a lifetime is an education... and hopefully one that is motivating more and more visitors to take action on climate change.

Getting to Antarctica still poses a challenge, and all operators stress the weather dependence of travel. The Drake Passage is one of the deadliest stretches of water on the planet, inspiring the sailors' maxim, "Below 40 degrees South, there is no law. Below 50 degrees, there is no god."

Although today's tourist vessels are unlikely to succumb to the elements, their passengers do so with alarming regularity. In the words of one expedition leader: "People get so seasick they think they're going to die... and then they start wishing they would." Rough seas also wreak havoc with ship doors, which have been known to slam unexpectedly, removing sections of passengers' fingers on occasion.

There are about 4,000 jobs in Antarctica each year, open to the brave of heart. Bases employ scientists, doctors and a whack of support staff; programs are offered through the New Zealand government and the US National Science Foundation. Ships and tourism operators also employ scientific staff as well as expedition leaders, zodiac drivers, logisticians.

Students on Ice: This Canadian educational organization operates one expedition per year, in late December. Travel with a team of scientists and experts, learn about the impacts of climate change and the issues facing the Antarctic region. Open to high school and university students; volunteer expedition and medical staff are also eligible.

A starkly beautiful wilderness of active volcanoes, ice fields, fjords, hot springs, mud pools and vast lava deserts—Iceland offers much more than its name would imply. It was a Norwegian explorer in search of new farmland who christened the country—and the name reflects his bitterness at the discovery of Europe's largest glacier.

It is, perhaps, the name that is partially responsible for a relative lack of settlement here: Iceland is home to only 288,000 people. In an area the size of Newfoundland that leaves plenty of space to explore, and it is no surprise that outdoor adventure is a draw for visitors. Hiking here, you can take your pick of any number of lush or near-lunar landscapes. While you definitely need to prepare for the force of the elements, it is an experience not to be missed.

This is one of the most volcanically active regions to be found anywhere, a fact that is both a gift and a curse. Unpredictable volcanic activity occasionally destroys sections of towns—but is also the responsible for a landscape that is beautifully surreal. And, geothermal activity has endowed Iceland with a sustainable energy source that accounts for over half of its energy consumption, making it one of the most green and progressive nations in the world.

Even our own, very conservative, Department of Consular Affairs could find little for us to worry about in Iceland. Stick to the trails, try not to fall into active volcanoes or hot springs, don't drink too much Brennivín and you should be OK.

Participate on practical conservation projects around Iceland with the Environment Agency of Iceland (Umhverfisstofnun). Most work is focused on maintaining and improving trails, though some volunteers undertake wilderness management and heritage management projects. No cost to participate.

Picture all of Canada's landscapes condensed into an area the size of Britain, a smattering of friendly natives and no real winter to speak of. Add a dash of rainforest, a modicum of volcanoes, and an unparalleled network of national parks. Crack open a Steinlager, kick back and think about it a while... sound good? It doesn't begin to do justice to the paradise that is New Zealand.

Any nation that proudly proclaims that sheep outnumber people (16 to 1) and chooses a bizarrely adorable flightless bird (the kiwi) as its national symbol has a pretty good outlook on life.

Despite its distance from our home and native land, New Zealand has a feel that is remarkably similar in many ways. It's not just some parallels in the country's heritage, but also their international political outlook and a love-hate relationship with their neighbouring state.

People known for their love of travel, Kiwis are welcoming to visitors who turn up on their turf—and more than ready to point you in the direction of a good adventure. And their sense of adventure knows few boundaries. The spectacular landscape seems to inspire a different adrenaline activity at every turn: take your pick from hiking, paddling, skiing, canyoning, biking, bungy jumping, rock climbing, sailing, scuba... need we say more?

Well, it's impossible to find wild creatures any more dangerous than a deer or a kiwi. And this is a respectable, law-abiding country. Chances are good that the biggest trouble you're likely to encounter will be self-induced; there are plenty of charming locals eager to throw you in a raft or off a bridge.

With a higher education system comparable in quality to Canada's, New Zealand attracts huge numbers of foreign students every year. It's difficult to think of a reason not to study here: from the student life to the overall setting, New Zealand offers an amazing lifestyle to go with an equally outstanding selection of degrees. And, to boot, programmes tend to be shorter than in Canada (3 years for undergraduate degrees; entry into medical and law degrees straight from high school)—making study here surprisingly cost-effective for foreign students. Click here to check out the benefits of a New Zealand education.

AustraLearn not-for-profit agency offering free services to help students select a school, file the necessary paperwork for applications and visas, and provide on-the-ground support throughout your stay in New Zealand.

When I visited Argentinean Patagonia a few years ago, I met a young man who had grown up near El Chaltén, just East of the Andes. He had left Patagonia only once in his life. "I had to come back," he told me. The outside world just felt wrong. "I couldn't get used to the quiet," he explained.

Patagonia is famous for its howling wind, which can be unforgiving and relentless. Those who can brave it, however, are treated to a landscape that is wild and beautiful, and people who are both warm and colourful. For years, this area of the world has been a magnet for adventure travellers.

Jagged granite peaks of the Andes contrast with the dessicated grassland and scrub steppes to the east and rain forests along the coast to the west. Patagonia encompasses both the highest and the lowest points on the South American continent, and stretches from the Pacific to the Atlantic coast across Chile and Argentina. South America's most famous park Torres del Paine attracts adventurers from around the globe, while other parts of Patagonia can seem almost undiscovered.

Again, you are more likely to get yourself in trouble than to find trouble elsewhere. Exercise normal precautions for travel in South America.

We had to make the list somewhere, didn't we? No, we don't mean Ontario... it's not all that great and these days it's rarely white. We mean that land of permafrost and tundra north of 60 degrees, home to our country's original residents. A visit here is absolutely necessary to appreciate the true natural and cultural diversity of Canada; it is a trip that too few of us ever make.

Differences between the Canadian North and South cannot be measured in miles. They go beyond the midnight sun and northern lights, beyond the thousands of miles of open space shared by only a handful of residents. The landscape and the elements are both so forceful and so magical that being here, one begins to feel, and understand, Northern peoples' connections to the land.

The main danger might be an overall reluctance to return to the hectic life in southern Canada.

Frontiers Foundation operates education projects and construction projects across the Northwest Territories, Nunavut and the Yukon.