You are here: Home/ Articles/ Study Abroad/ Blogs/ Hitchhiking From Cambridge to Warsaw in 24 Hours

Hitchhiking From Cambridge to Warsaw in 24 Hours 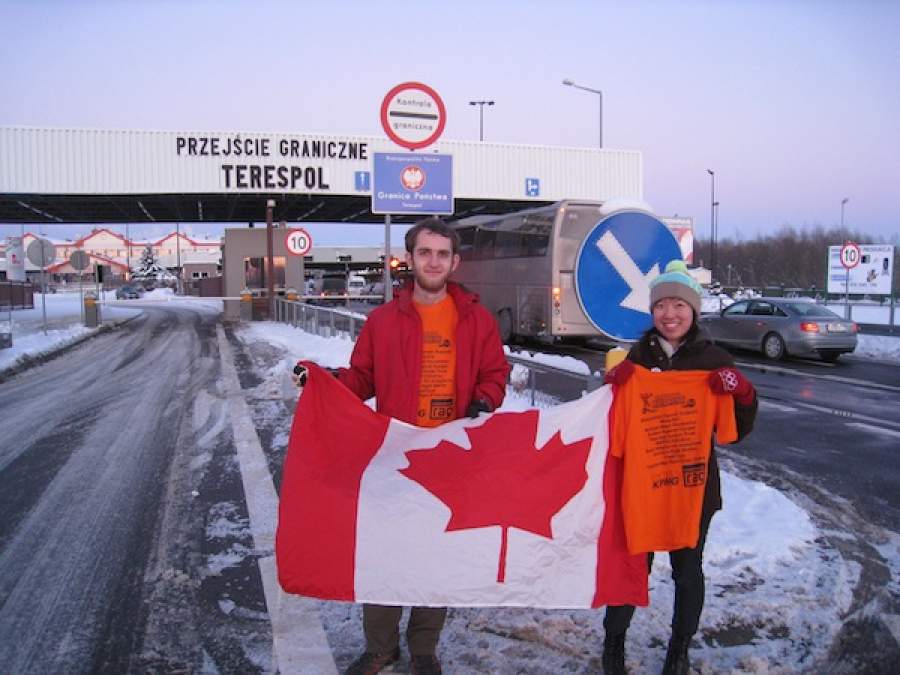 Susan and her travel partner at the Poland-Belarusian border, which they reached in less than 31 hours without spending a dime.
By  Susan Chan

Hitching a ride has never been this fun.

Hitchhiking has long been a cheap way to travel and while I’m always looking for bargains on how to get from Point A to Point B, hitchhiking has been something that I have never, ever considered. It always seemed to me that it was long past its heyday; no one seemed to do it anymore and was so risky and dangerous.

However, after participating in a university charity hitchhike, I am hooked. I, who have never tried nor considered hitchhiking before, am now itching to try it again. But first, let me backtrack.

It began when a friend and I participated in a charity hitchhike event called “Jailbreak,” a competition which gave us 36 hours to get as far away from our starting point as possible. The catch? We were not allowed to use any money on transportation. Jailbreak and its various spinoffs are quite common fundraising initiatives across universities in the UK and as soon as I found out about it, I knew I simply had to do it!

So on January 25 at 9 am, we were “released” from jail to run as far away from Cambridge as possible. I had zero expectations, having never even thought about hitchhiking before. We started walking towards the direction of the motorway entrance, where we hoped someone would pick us up and take us somewhere. However, we were quickly offered a ride to the motorway entrance, saving us the walk! Then we caught another ride, and then another, and then another! In about three hours, we had hitched four different rides, travelling 200 km from Cambridge to Dover.

We quickly hitched a ride onto the ferry across the Channel, and once we reached mainland Europe, it all became a blur. One ride after another, we crossed one border after another…it seemed so natural after a while, to be at a gas station and to ask just ask anyone who walked in if we could hitch a ride with them. In less than 24 hours, we had reached Warsaw, Poland—over 1700 km, hitching 13 different rides and not spending a single cent. We reached our furthest point after hitching three more rides, ending up at the Poland-Belarus border in 31 hours, not being able to go any further without Belarusian visas! By then, my feelings were absolutely indescribable. I was so impressed and delighted and grateful for the kindness of so many strangers along the way.

After that adventure, I am longing to hitchhike again. There is really no better feeling or experience in the world that can compare to the kindness and generosity of complete strangers. Hitchhiking is so much more than catching a free ride; it is also an incomparable cultural exchange with the generous strangers who offer you a ride.

Although I’m far from an experienced hitchhiker, having only done it once, I do have some tips to offer after catching 16 lifts and travelling nearly 2000 in less than 36 hours. Maybe my advice, coming from someone completely new and uninitiated to the world of hitchhiking, will be more accessible to those who are interested but hesitant about giving hitchhiking a go.

Hitchhiking with a partner can ensure safety and it really is the best number to go.

More than two people might make it difficult to hitch a ride. Not only are cars in Europe are small to begin with, but when you hitchhike, you are looking for people who are travelling long distances and they tend to have a fair bit of luggage with them.

This means one of two things: firstly, it is definitely very helpful to have a sign with the name of the country/city/general direction in which you want to go. Secondly, it also means that you might want to dress up in and/or carry something gimmicky. I wore a bright Pikachiu onesie for part of the journey and we always carried a gigantic Canadian flag with us, which proved to be very helpful when we were trying to hitch our last ride from a tiny Polish town to the Belarusian border.

This was something we learned as we went along—which places are and aren’t good for catching a ride. Generally, you want to make sure that there is ample and safe space for a car to stop after they have seen you. You want to situate yourself close to motorway entrances, and definitely away from the city centre. Gas stations by the side of the motorway are by far the best.

When we set off from Cambridge at 9 am, we had no idea that we would end up in Poland! We were happy to take whatever lift was offered to us and that is the easiest way to go. If you are set on finding a particular lift to a certain place, you might be waiting for hours. Looking back, we could have even ended up in Prague.

Remember—you are not simply looking for a free ride!

I like to think of hitchhiking as a cultural or conversational exchange. Drivers don’t want someone to sit mutely in their car for hours, leaving as soon as the destination is reached. Present yourself as an interesting conversation partner and travel companion! It also helps to learn or use words in the local language. This works well for you too, as conversation makes the long hours in a car less boring.

Susan Chan is doing what many recent high school graduates do—pursuing post-secondary education. However, in doing so, she moved “across the pond” from Canada to England. She hopes to satisfy her self-proclaimed “infinite wanderlust” as she does her undergraduate studies at the University of Cambridge.