You are here: Home/ Articles/ Study Abroad/ Blogs/ For the Love of the Sport: A Soccer Match in Milan

For the Love of the Sport: A Soccer Match in Milan 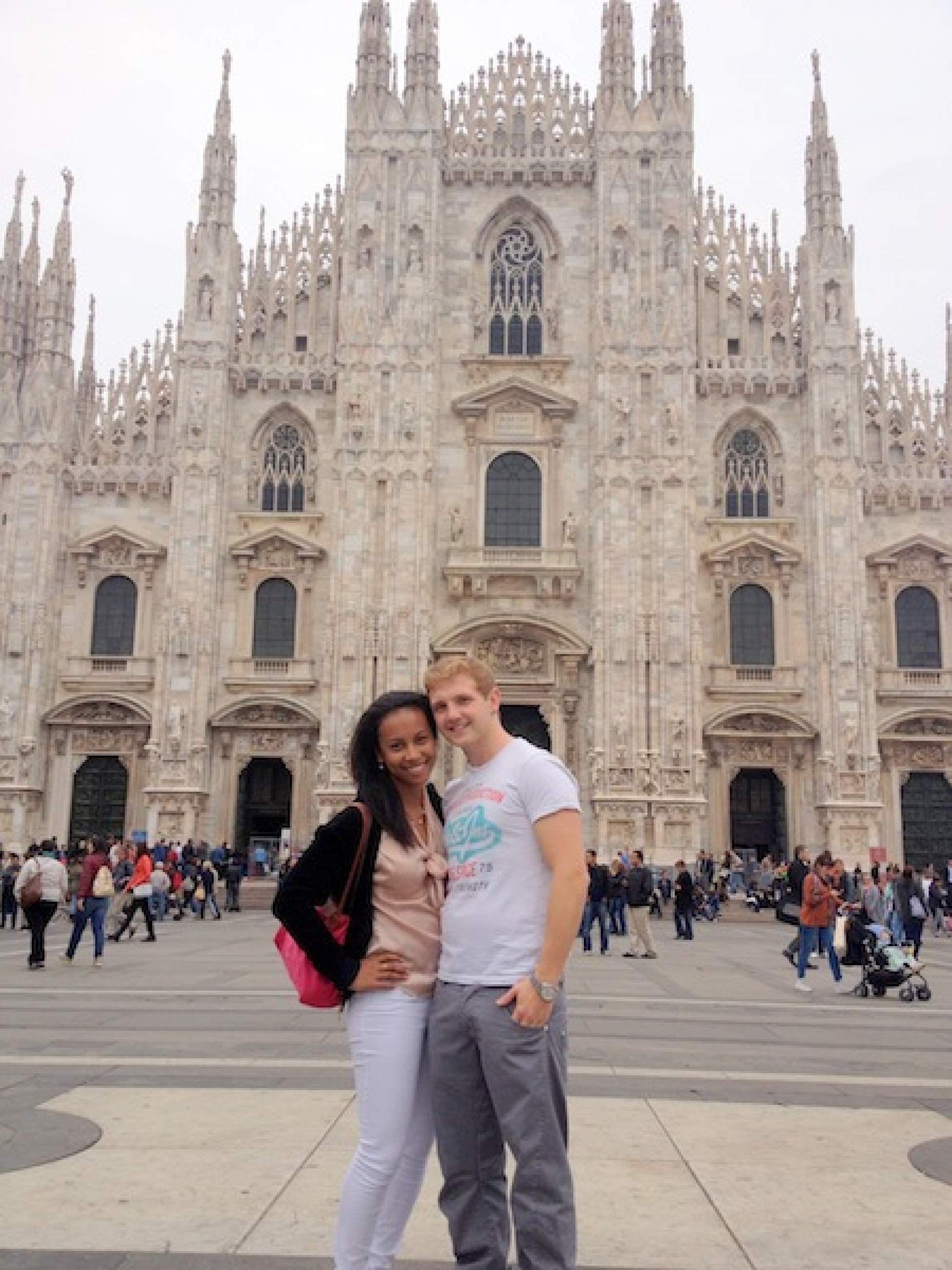 Maria and her boyfriend in Milan.
By  Maria Madison

Reluctantly, Maria attends a football game, where she discovers that there's more to Milan than fashion and food.

This past week, after being dragged to The Louvre for the fourth time in a month, getting lost in the subway for the hundredth time, and shelling out nine euros for a simple sandwich, I decided I was ready for a break from Paris. With that thought in mind, I called up my boyfriend and the two of us made plans to spend the weekend in Milan.

My basic plan was to shop as much as possible (and then spend the night suffering from shopper’s guilt), see the sights (because I’ll always be a tourist at heart), eat as much pizza as my body could handle (and then eat a little more just to be sure), drink some Italian wine (because I’m actually legal in this part of the world), and to stalk out as many celebrities as my little American eyes could find (why wouldn’t all my favorite celebrities be in Milan at the same time as me?).

For the most part, all of that happened: I shopped all day and dealt with the guilt by putting off the “oh my gosh I’m so broke” panic attack until the end of the trip, took a tour of the city and realized there was more the fashion capital than just clothes. I ate some pizza (and spaghetti, a huge cannoli, three cups of gelato, bread and a full chocolate bar), drank some wine, and…well, I couldn’t stalk any celebrities because Milan Fashion Week was two weeks prior and I guess the celebs were all Milan-ed out (don’t worry, I paid my celebrity-watching dues during Paris Fashion Week). However, strangely enough, I had the most fun this weekend doing something I hadn’t planned on at all: attending a soccer match.

As soon as we got to Milan, my boyfriend said: “There’s something I want to ask you. But I won’t ask now because I need you to be in a really good mood so you’ll say yes.” My boyfriend has three great loves: Mike and Ike, Manchester United and soccer (or football) in general. I’m not an idiot and my immediate response was, “I’m not going to a soccer game with you.” Queue his shocked face and ready argument.

Now, it’s not that I don’t like soccer—I played it up until I went to college—but I didn’t come to one of the fashion capitals of the world in order to watch a bunch of guys who don’t resemble David Beckham or Cristiano Ronaldo (the only two soccer players I know) kick around a ball. Also, the tickets were 55 pounds and the thought of spending that kind of money on anything but a pair of Italian shoes was enough to make me feel sick. However, it wasn’t long before my boyfriend took matters into his own hands and shelled out the money for two Saturday night tickets.

Well, now the circumstances had changed; all the shops were closed, I had spent more money that I care to acknowledge and I had a free ticket into my first professional soccer game. Pass the beer and a memorabilia scarf around this way, please!

Other than gross bathrooms and no personal space, I didn’t know what I was expecting. Of course, all my expectations were fulfilled (in the women’s bathroom, the toilet was legitimately a bunch of holes in the floor) but I also walked out with the most absurd—and weirdly amazing—experience.

We got there right before the game between Inter Milan and Roma started, and just as my boyfriend and I settled into our seats (which I guess were ideal since they were right behind the soccer goal), a huge flag was thrown down from the upper balcony and unrolled all the way down to the bottom of the seats. I was covered in this white and blue Inter Milan flag while Milan fans around me sang and screamed and basically had the time of their lives. I don’t think I had ever been to a place where people were just so…electric. Unfortunately, their excitement didn’t last. Before the end of the half, Roma was up 3 – 0 and as Roma’s score increased, so did the Milanese tempers’.

Have you ever had a crowd of screaming Italians surround you? Voices loud, hands moving, faces angry? No? Well, it’s an experience to say the least. I didn’t know whether to be more concerned for the referees’ safety as the crowd yelled at them for not calling a foul every time one of their players faked an injury (I mean, to be fair, both teams were faking so many injuries that my real question was if this was a soccer game or a World War II movie set) or for my own if they realized I was secretly cheering for Roma to win. What can I say? Rome was the first Italian city I ever visited and since I threw a coin in the Trevi Fountain, it will always have a piece of my heart—and I guess all of my soccer loyalties.

By the time the game ended, the Milan fans were sitting quietly—aside from the occasional break to yell at the referee—and the Roma fans on the opposite side of the stadium were lighting flares and singing loudly enough to have their voices carry all the way to their home stadium. Honestly, it was amazing to me that such a small group of people could be so loud and passionate about a game.

At the end of the match, my boyfriend apologized for the “atmosphere not being at its best.” But honestly, if that’s what it’s like at its worst, then maybe I should become more of a soccer fan so I can figure out what it is about the sport that makes just attending a game such a spectacle; or at least I can try.

Maria Madison is 20-year-old studying in Paris, France. In Europe for five months, she's travelling everywhere while keeping up her strength with daily éclairs and walks throughout the city. Destination? Anywhere. Read more on her personal blog.