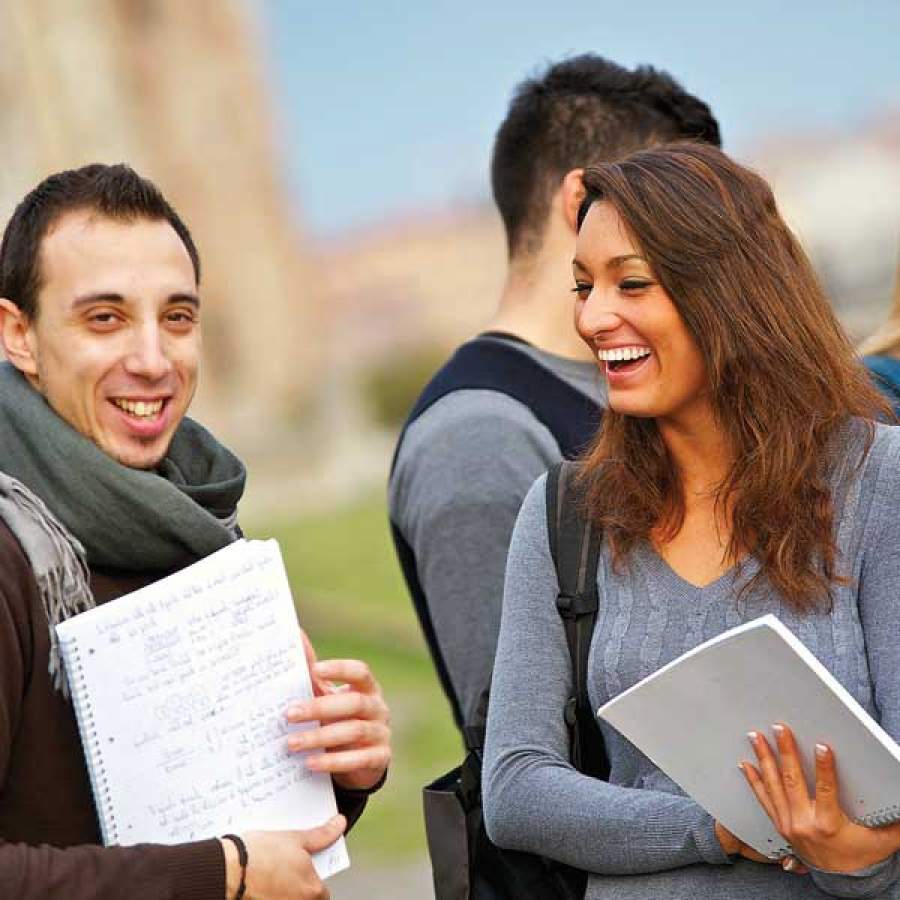 Compared with other countries, very few North American students study abroad. Why must that change?

Sofia Martinez knew she was accomplishing big things at her internship in Angers, France when the mayor of the city, Jean-Claude Antonini, asked her to translate a letter to the president of Mali.

Calling it a “daunting task,” Martinez felt up to the challenge in her role at Angers City Hall, which lasted four months and consisted of language translation, research, evaluating employment resumes and assisting ambassadors to the city. “I was completely unsure of what to expect. I was welcomed, however, with open arms and received as much of an education there as I did in my regular university classes,” Martinez says.

The internship was “nothing short of educational and eye-opening,” according to Martinez, and gave her insight into daily, real-life workings in a global business setting that had only been covered briefly in her Business Management class.

Martinez’s experience is exactly the goal of university study abroad programmes such as the one she experienced through St. Edward’s University in Austin, Texas. By interning overseas, she not only gained French business language and international relations skills—she also received transfer course credit.

But while studying abroad is a large part of the university experience in Europe, North American students seem to be lagging behind in such life-enriching opportunities. Recent figures have indicated that only one per cent of students in the United States study abroad. In Canada, the number is a little higher, with nine per cent of students going abroad in the past three years.

"The learning that takes place while studying abroad occurs at a more profound rate than in any other type of learning environment."Cost is a major barrier for many students and others cite concerns about graduating on time. For some students, an impediment to studying abroad may simply be the lack of awareness, support or opportunities to help them on the path. But for those students who do complete international study programmes, the rewards are great—both educationally and in life skills. Research has suggested that not only are students who study abroad more likely to become employed after graduating, their starting salaries may be higher, as well.

“The learning that takes place personally and intellectually while studying abroad occurs at a more rapid and profound rate than in any other type of learning environment,” says Tom Evans, Associate Vice President of Professional Education and Global Initiatives at St. Edward’s University in Austin, Texas. “Students can experience much more than just ‘studying’ by working on internships, consulting projects or through service learning.” Evans adds that by living and studying in another culture, students learn to adjust more easily to future challenges in life—and to become more caring, open-minded people.

Evans is far from the only faculty member who sees the value in study abroad programmes. Increasingly, university leaders in North America want more students to embrace a learning experience in another country. In February 2012, 25 university presidents met with parliamentarians in Ottawa and expressed concern that Canadian students who stay close to home miss out on forming international connections and a developing a strong spirit of innovation.

Andrea Flynn, a biology major at St. Francis Xavier University in Nova Scotia, took advantage of an opportunity to study biosciences and aquaculture in Norway for a semester, receiving both a full scholarship and transferred credit towards her degree.

“I am really trying to get as much as I can out of my university career, and gain as much experience as possible,” Flynn said. Studying abroad gave her the unique chance to study in the Arctic, as well as in a completely different cultural environment. “We get to meet new people, experience a different culture, and learn from a new perspective.”

International exchange experiences have been growing steadily on the StFX campus. In the past, between 20 and 25 StFX students would participate in the exchange programme in a typical academic year. For the 2012-2013 year, however, Riley expects that as many as 40 StFX students will study abroad in countries such as China, Mexico, Argentina, Australia and Israel.

Flynn encourages students to explore all options, so that they can take advantage of the significant benefits that studying abroad offers. “The possibilities are endless for students if they just seek out what they want to do,” she says, “all you have to do is ask.” Most mid-sized and large universities have a dedicated office for international studies, and students can always consult with an advisor or faculty member about available options if they wish to study abroad. Most of the time, transfer credit can be worked out between accredited universities.

In the United States, some recent initiatives are showing great promise for increasing the study abroad opportunities of its college students. The Senator Paul Simon Study Abroad Act was approved in 2009, with the goal of having one million American students studying abroad each year within the next 10 years.

Similarly, in November 2009, President Obama announced the 100,000 Strong Initiative, a national effort designed to dramatically increase the number of American students studying in China. Currently, 10 times more Chinese students come to the U.S. for educational programmes than American students who go to China. Hillary Clinton officially launched the programme in May 2010 in Beijing, helping to highlight the importance of U.S.-China relationships. The Chinese government is supporting the initiative by providing 10,000 scholarships for American students to study in China.

Catherine MacDermott, a faculty member at St. Edward’s University in Texas who helps to facilitate the university’s study abroad programmes, has witnessed how transformational it can be for students to study abroad. “We all come home changed,” says MacDermott, who calls these experiences “feeling history.”