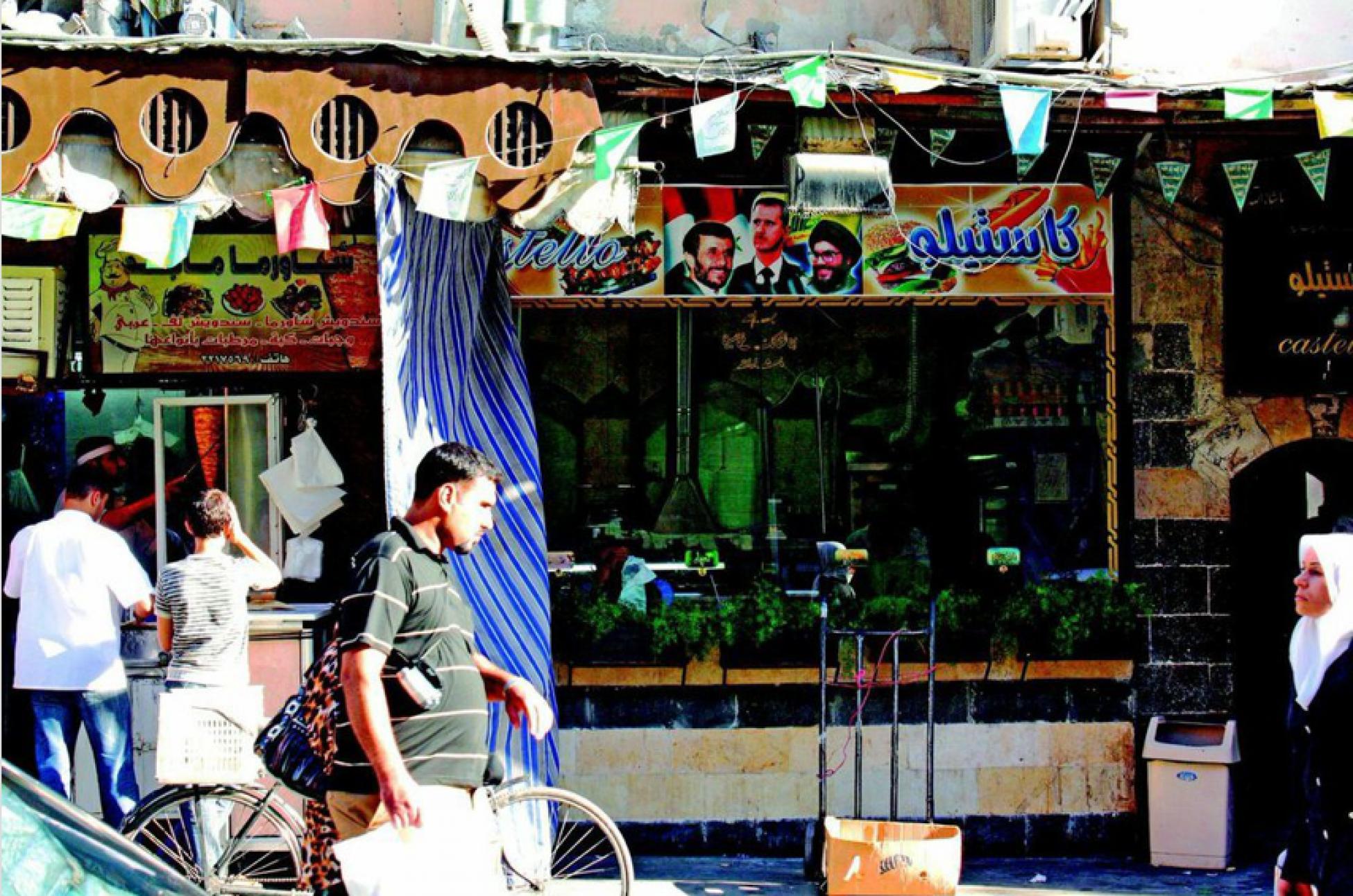 The ubiquitous sign over a shawarma restaurant shows President Mahmoud Ahmadinejad of Iran, President Bashar al Assad of Syria, and Hassan Nasrallah, Secretary General of Hezbollah. Propagandistic photos like this were common around Damascus.
By  Michela Yule

I repeated the phrases over and over, feeling the new sounds on my tongue and practicing rapid conversations with myself. The Iraqi dialect differs significantly from the various Arabic dialects I had studied intensively for three years. With only a few short weeks before my departure, I worried that I wouldn’t learn it in time.

As a 21-year-old American college student, the closest I could get to Iraq was Syria—but with over one million Iraqi refugees in Damascus, it was close enough. My plan was to conduct research for a thesis on the experiences of Iraqi refugee women. Most fled to Syria to escape the violence that erupted after the United States invaded Iraq in 2003. Finding temporary refuge in overcrowded and impoverished communities on the outskirts of Damascus, refugees are denied the right to work. Their only option is to wait indefinitely for peace in Iraq or the chance to be resettled elsewhere.

For me, the stories of these Iraqi women were compelling because they hadn’t yet been shared. During 30 years of constant war and heavy sanctions in Iraq, women had undergone unthinkable adversity—and survived, unlike hundreds of thousands of their male counterparts. The moment was prime: as a woman with rare access to the private female sphere; as an American at a time when Syrian visas were available; and as a fluent Arabic speaker, I could reach these women. I would interview them and compile their stories into a rare portrait of life in displacement.

This was easier said than done.

The Syrian government keeps tight control over the refugee community, allowing only restricted access to select foreigners, NGOs and journalists. They exercise control through a vast network of secret police that arrest, deport and torture suspicious individuals. It is their work that we have witnessed since early 2011—so far, the deaths of an estimated 10,000 Syrians and the arrests of tens of thousands more.

In order to escape the attention of the authorities, I would appear like any other student of Arabic. But this wasn’t a typical study abroad experience. An Anthropology professor warned me that in the worst case, I would “write a great ethnography of a jail cell.” I knew deportation was a real possibility, but preferred not to think about the worst outcomes. Still, it was a long way from my freshman days of beginner Arabic, when I was still learning the map of the Middle East.

On the last day of class, my Iraqi advisor ran his red glass prayer beads through his fingers. “Michaela, the most radical and dangerous people from Saddam’s regime and the insurgency in Iraq are now hiding in Syria. You will likely run into these people in your interviews and you need to be very careful. ”

With only eight weeks in Syria, I immediately kicked off my research with a meeting at the NGO that had agreed to support my work. Rather than speak on his tapped cell phone, the single staff member met me in person and introduced me to a local volunteer, Mona. A 23-year-old former law student, Mona had fled to Syria in 2006. She agreed to act as my liaison and to help me complete 20 interviews.

I was elated by this quick progress but also unnerved; Mona did not speak a word of English and I could hardly keep up with her rapid Iraqi Arabic. Without a moment to indulge in this apprehension, I met Mona that afternoon in her neighbourhood.

Jeremaneh is typical of Iraqi neighborhoods in Damascus, now known as “Little Baghdads”—isolated both geographically and socially from the rest of the city. Dust rose from the unpaved streets and trash accumulated in empty lots in all directions. Young boys in untied shoes ran up to me with palms outstretched and I shook my head sadly. I was the only foreigner in sight and quite conspicuous despite my sunglasses, baggy linen pants and long-sleeved shirt buttoned up to the neck.

I held my first interview that day with Mona’s neighbour, Um Ali. The family requested that I not record the conversation, so I reluctantly pocketed my new recorder. My Iraqi Arabic was about to be put to the test.

Um Ali clapped her hands together and laughed at my unexpected use of Iraqi phrases.

“Why did you decide to leave Iraq?”

Abu Ali, her husband, spoke up gruffly, apparently eager to answer before his wife.

He spoke in a heavy stream that I barely understood. I had prepared thoroughly for my interviews, learning words like “sanctions” and “missiles,” but somehow missing “torture” and “kidnap.” The word “militia” emerged with a dollar amount and I pieced together the story: one of his children had been held for ransom.

“They came for my daughter, who was 5-years-old at the time, but I would not let them take her. I stood in their way and offered them myself instead.”

“Did they hit you? Was there pain?” This was my improvised way of asking if he had been tortured. I was sure everyone could hear my pulse racing as my words hung in the air. Was I being rude and intrusive?

Abu Ali explained that the militia took him from his home and demanded a ransom, which Um Ali struggled to collect. Abu Ali was finally released three days later, having been severely beaten.

I was humbled by the candor of this family, and suddenly felt presumptuous as a college student intruding on their lives and privacy. I realized grimly that, despite all my academic preparation—background research, confidentiality procedures, language skills—I had not fully understood the gravity of the task I was undertaking.

Over time, the interviews became easier. I knew better what questions to ask, how to ask them and how to interpret certain answers. I was able to contain my emotions and learned to sit comfortably on the floor for two hours at a time. And as I listened to these families’ clear voices and vivid accounts, I resolved that these stories would not end with me. Somehow, I would find a way to communicate this experience to others: the resounding voices and unbridled emotions, the unwavering grace and hospitality, and the varying extremes of hope and despair.

What began as an academic endeavour to document the lives of Iraqi women in displacement quickly became a personal project that would not end with the submission of a thesis. I spent the year after graduation living in Amman, Jordan continuing the work with Iraqi women there and maintaining contact with those in Syria.

I remember each and every one of my interviewees: the woman’s face, how she served the tea, why she left Iraq. Three years later, their stories have not left me. I continue to practice Iraqi Arabic and hope for the day when I can visit these women settled in a peaceful, united Iraq.