You are here: Home/ Articles/ Beyond the Guidebook/ Freeze Frame in Luang Namtha 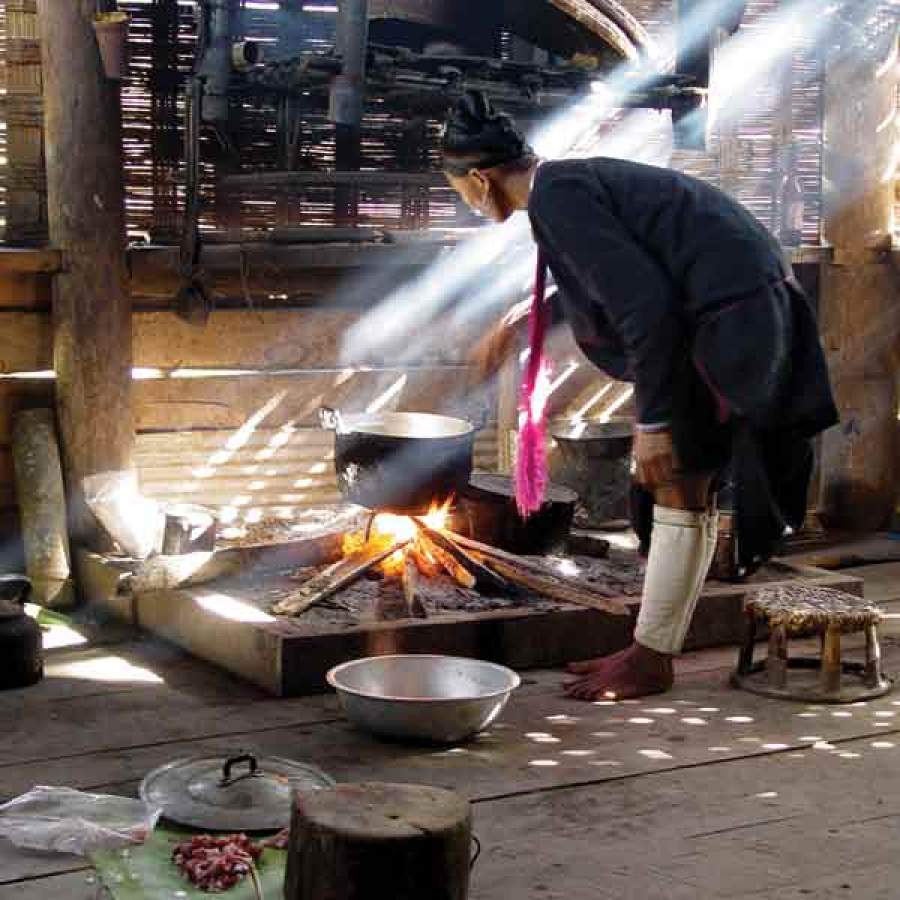 The children went wild, pushing each other aside to see my little camera screen.  The adults surveyed me with great interest:  my skin, my hair, my clothes.  They looked at the camera openly, waiting for something to happen.

Here, in the Khmu village of Ban Sposim, I realized my long search was over:  the search for a new documentary project, for something that would re-open my photographic eyes after a ten-year slumber.  On the remote banks of the Nam Tha River, I'd found a place of mutual curiosity, where the locals wanted to know about me as much as I was interested in them.

The year was 2002 and the trip was organized by the Nam Ha Ecotourism Pilot Project.   The country's greatest diversity of ethnicities lived here in Luang Namtha province, many in remote villages, where they pursued self-sufficient lifestyles that hadn't changed much over the years.  Women grew their own cotton, wove everyday garments and coloured them with dyes from plants they grew themselves.  Farmers used buffalo to till the rice paddies.  The province had little electricity and virtually no television.  Road connections were poor and there were only three flights a week aboard an old Chinese-built 15-seat plane.

All of this was about to change.  In 2003, electricity came from China, and people started buying TVs and satellite dishes.  Suddenly, they were watching Chinese television and Thai soap operas.  In 2005, work started on a new road connecting China with Thailand, via Luang Namtha.  Now transport trucks and tourists breeze through on Highway 3 and the new airport accommodates bigger planeloads of visitors.

Back in 2002 it was clear that these planned infrastructure projects would bring enormous social changes—my goal has been to document the traditional lifestyles as well as the changes.  This is a slow process, which cannot be rushed:  in the eyes of the local people, I'm a falang, a foreigner, and it takes time to build trust.

The first time I visit a new village, a guide accompanies and introduces me.  I don't take many significant photos, maybe some children with bravado expressions, some houses, people working, but only with permission.  After a few weeks in Luang Namtha, I fly to Bangkok and print a selection of the photographs, based on my perception of what the people want, even if it's formal full-length portraits.

This is a slow process which cannot be rushed: in the eyes of the local people, I'm a falang, a foreigner, and it takes time to build trust.

Some weeks or months later, I return to the same villages and ask my guide to find the headman, who invites me into his house and offers tea.  I give the headman the whole stack of photos and ask if he would kindly distribute them.  This way he receives appropriate respect and gains face in the eyes of the villagers.  Usually the photos are received with great enthusiasm, and a chaotic, hilarious distribution process begins.  As soon as one child goes out, waving a picture of himself or his sister, the whole village descends upon the headman’s house.

My guide translates to the headman and the other elders why I am here.  I mention that over the past few years the villagers must have experienced some changes in lifestyle.   Perhaps the elders find it hard to explain to their grandchildren how they lived in the past, and if things change much more, their children may find it even harder to tell their grandchildren how things were in the olden days.  Often the headman or one of the elders agrees and begins to persuade the others.  I promise them that every photo taken of a person will be given back to them, just like this time.

I may look around the headman’s house and remark on what an interesting house it is.   Would he mind if I took some interior photos?  Usually he'll look puzzled, but seldom does he refuse.

I wander around the village, usually followed by a stream of children who ask me to take photos of them.  A grandmother may come out carrying a toddler and ask for a picture.  If the village has traditional tribal costume someone may go home and put it on for the occasion.  Women, and sometimes men, don make-up and silver jewellery.   All this dressing up and posing made me uncomfortable until I realized that formal portraits were what they wanted.

All this dressing up and posing made me uncomfortable until I realized that was what they wanted.

In 2003, on my way to one village for my fourth visit, about an hour’s walk, I was overtaken by a bunch of teenage girls.  Although they were carrying baskets of firewood and wearing flip-flops, they were much faster than me.  One girl recognized me, smiled and chattered to her companions. They sped up and took off.  When we arrived at the village, the girls had already dressed up and were in the process of applying rouge.

I always return to each village, weeks or months later with another stack of pictures and go through the same process again.  I photograph people cooking or feeding the animals, even details of building techniques and tools, as a record for future historians and anthropologists.

I do my utmost to avoid exploiting my subjects.  Everyone gets at least one copy for themselves, usually a six-by-eight inch laminated print.  From my print sales, a portion of the proceeds goes to the village for a community project.  My images are available to a variety of NGOs for publicity purposes.  Some are on display at the Lao National Museum and I'm arranging for my photos to be preserved in an archive for posterity.

Visit Kees Sprengers' site and view hundreds of his photos.