You are here: Home/ Articles/ Beyond the Guidebook/ A Bite of Beijing

A Bite of Beijing 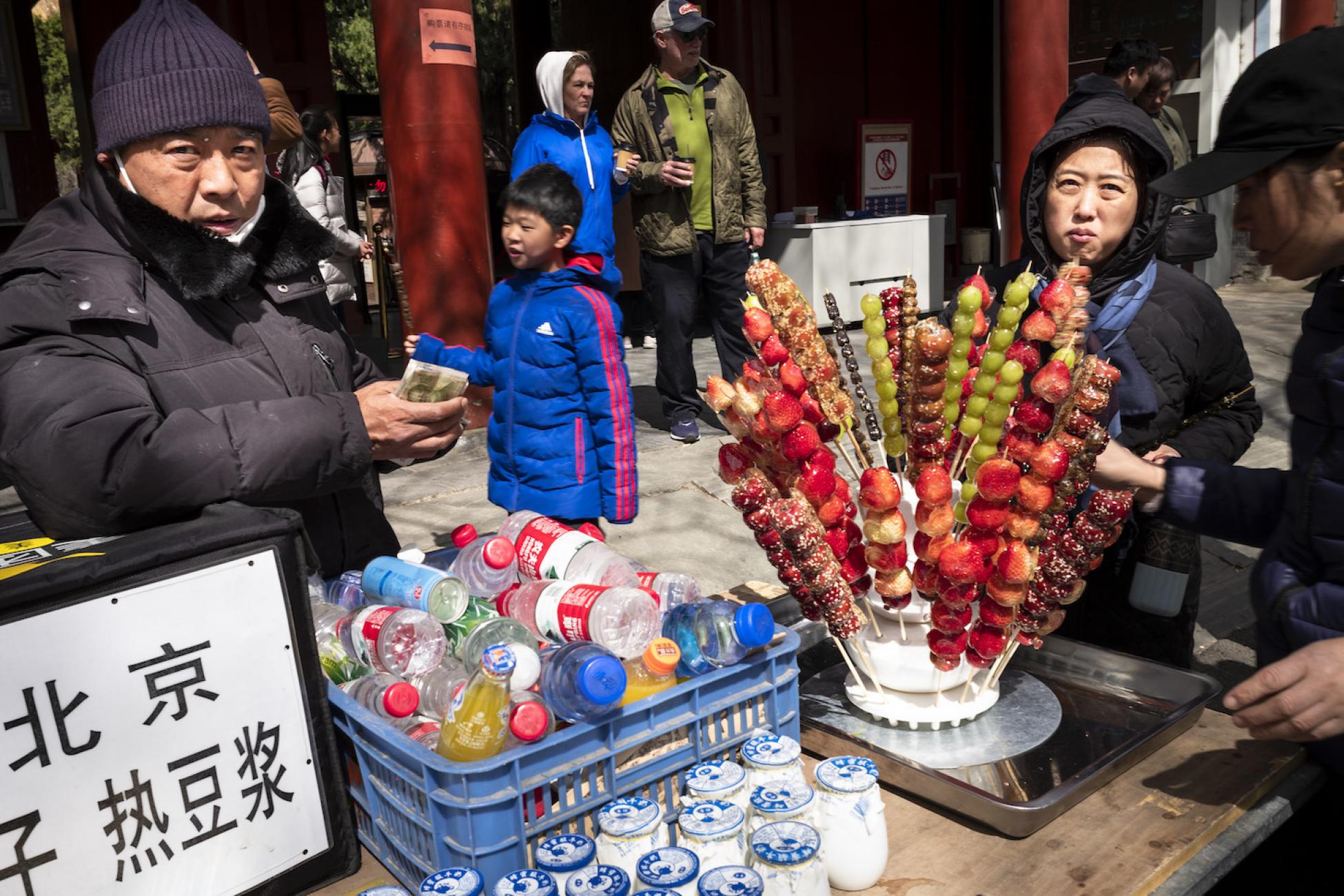 Four Chinese students share their favourite local snacks—and some history of their city in the process.

Beijing snacks are known for their long history, wide variety and the delicate process needed to make them. You may come across authentic Beijing flavour in the deepest areas of a Hutong (a narrow alleyway in ancient areas of Chinese cities) or sitting in a time-honoured restaurant along the street. Derived from local delicacies of different nationalities like the Han nationality, the Hui nationality, the Mongolian nationality and palace snacks of the Ming and Qing Dynasties, Beijing snacks have evolved to include around 300 kinds of foods.

As Chinese students of the China Foreign Affairs University in Beijing, we wanted to introduce travellers and expats alike to what we know and love about Beijing food. Here are six must-try traditional snacks.

Does the name make you think of fried liver? Then you have been tricked! Some typical pork organs, like the heart, liver, lungs and intestines, as well as garlic seasoning, vinegar and soy sauce conjure up this strangely named Beijing snack.

It is said that in the Qing Dynasty in Beijing, the owner of the Huixianju restaurant (会仙居) passed way, and his sons needed to continue the restaurant’s operation. Inspired by the snacks next door, they initially invented a kind of hodgepodge of the lungs, hearts, livers and intestines into a boiling pot. However, such dishes weren’t appealing to many customers, who suggested they remove the lungs and hearts and bestow upon it a seemingly mysterious name: “liver fry” or “chaogan,” to make it more attractive.

Such modifications indeed had an effect, and the dish has been popular ever since.

When you get used to it, you may be impressed by the unique combination of organs and seasoning. Not everyone can tolerate such flavour, however some people love it.

But you must be wondering about its taste, right? It’s similar to another typical Beijing snack called luzhu, which also contains animal organs. Chaogan is, to some extent, sticky for those who make first contact with it. But when you get used to it, you may be impressed by the unique combination of organs and seasoning. Not everyone can tolerate such flavour, however some people love it so much they even get addicted, missing it after three days without a taste.

“The ingredients are quite fresh, and the smell goes very well. The intestines in the chaogan are very juicy, which leaves a good impression on me,” says one customer of Yaoji Chaogan restaurant.

The ingredients are safe to eat, but only if you go to a restaurant that meets the national health standards. One last tip: Some chaogan is sickeningly salty, so have water ready.

Zhang Quancai is considered the founder of the Baodu cuisine. He escaped from Shandong to Beijing to avoid the turbulence of the Qing Dynasty. He was then adopted by a couple who made a living by making the tripe dishes. After the couple passed away, Zhang inherited the secret of making Baodu and added his surname “Zhang,” creating what we know today as the brand “Baodu Zhang.”

Baodu Zhang was once eliminated by government policies, but the offspring of Zhang Quancai persevered with this cooking skill and have made Baodu Zhang prosper.

The main ingredient is fresh beef or lamb tripe that has been cut into slices, and then rapidly blanched in boiling water. It is a demanding job for a cook, since it requires experience and superb cooking skills to control the boiling time and heat. The texture of tripe is mainly crispy because they are boiled for just a little time. (However, sometimes it is hard to chew if the tripe is not boiled long enough.) It is often eaten dipped in flavoured seasonings.

The comments about baodu vary among customers. Some of them think it is delicious, while many others cannot bear the smell.

“I think most of the tourists from other provinces or foreigners may not accept the smell,” one diner tells us.

Have you ever imagined that a snack could evolve from a prescription? Well, get to know tanghulu.

In the Southern Song Dynasty, the Emperor Guangzong Zhao Wei’s favourite imperial concubine, Huang, was sick. She was losing weight and had no appetite. To regain her health, she had taken many expensive drugs, but to no effect. The emperor was desperate. A doctor came and said to concubine Huang: "You have to eat rock sugar and hawthorn fruit. The disease can be cured in half a month, as long as you eat five to 10 fruits before each meal."

Everyone was suspicious at the beginning. Fortunately, this method took effect as scheduled. This practice was later passed on to the common folk, and then the ice sugar gourd we see now was created.

Fresh fruits are placed in a row on one bamboo stick. The ice candy that covers the fruit—made of white sugar, rock sugar, honey and water—is crisp and easy to bite. It melts easily in your mouth, but isn’t sticky. And the ice candy can properly neutralize the sour taste of the hawthorn.

There are many flavours of ice sugar gourds: hawthorn, strawberry, apple and grape.

“My favourite is hawthorn tanghulu,” says one customer waiting to buy one, “it reminds me of my childhood.”

So, what’s your favourite type?

How could a rolling donkey possibly be the name of a traditional Beijing snack? It is said that once, Empress Dowager Cixi wanted to taste something new. So, the chef decided to use jiangmi powder and red bean paste to make a new dish for her.

When it was ready, a eunuch named Xiao Lver (literally meaning “little donkey”) came to the kitchen. This child was careless, and the newly prepared dish was placed into the pot with the soy bean noodles. The imperial chef was angry, but it was too late to do it again, and the chef had no choice but to present it to Cixi.

Surprisingly, Cixi liked the dish, and she asked the chef what it was. The chef thought that it was Xiao Lver who prepared it, so he responded, “This is called ‘Rolling Donkey.’” That’s why the snack has such a strange name.

A layer of soybean powder wraps the cake and neutralizes the sweetness of red bean paste, giving it a moderate sweet taste so you can enjoy the chewy donkey.

Don't have a sweet tooth? You have been guaranteed by one enthusiastic respondent that “even those who don't like sweet food may like it.” Some speculate that a hot one is more delicious. So prepare a rolling donkey and put it in the microwave. See if that’s true.

Pea cake can be traced back to the Qing Dynasty. One day while resting, Cixi suddenly heard a burst of “yo-heave-ho.”

Who was so bold and dared to disturb her?

She sent a eunuch to see what was happening. It turned out that it was a peddler. The man was brought into the garden and he served Cixi with a fresh pea cake. It was so lucky that Cixi appreciated that snack, so the man stayed in the Forbidden City specifically to make pea cake for the dowager.

Suppose everyone will like this delicate pea-related snack? Well, not really. (This author doesn’t like it much.)

Since the Manchu and Mongolian nobles introduced dairy products into Beijing in the early Qing Dynasty, the history of yogurt in Beijing has spanned hundreds of years. And the yogurt contained in white bottles nowadays only dates back to the 1960s.

Many Beijing locals can still remember the taste of the original white-bottled yogurt. After all, it was part of their lives for a long time.

“It tastes sweeter than when I was young. Generally speaking, I prefer the previous taste,” a native says. Beijing locals may get tired of this traditional yogurt, but tourists from other cities hold a different view: “It tastes great! And it’s different from other kinds of yogurt sold in supermarkets. It’s dense and sour and I love the original taste.”

The ingredients are simple, including milk, sugar, lactobacillus bulgaricus and honey, therefore it is beneficial for health.

It’s difficult to suck it up with a straw because of its density, so you’d better eat it with a spoon. With a white bottle of Beijing yogurt in hand, the old days of Beijing are in your sight.

Beijing snack is an embodiment of the history and culture of Beijing, and you can feel the true delight of the age-old city by savouring the taste of a vital facet of Beijingers’ lives. Roaming among the palaces and pavilions and strolling in the hutongs and courtyards while enjoying the pleasant aftertaste of Beijing snacks, what an enchanting spring day it would be!