You are here: Home/ Articles/ Work Abroad/ Picking Up the Pieces in Haiti

Picking Up the Pieces in Haiti 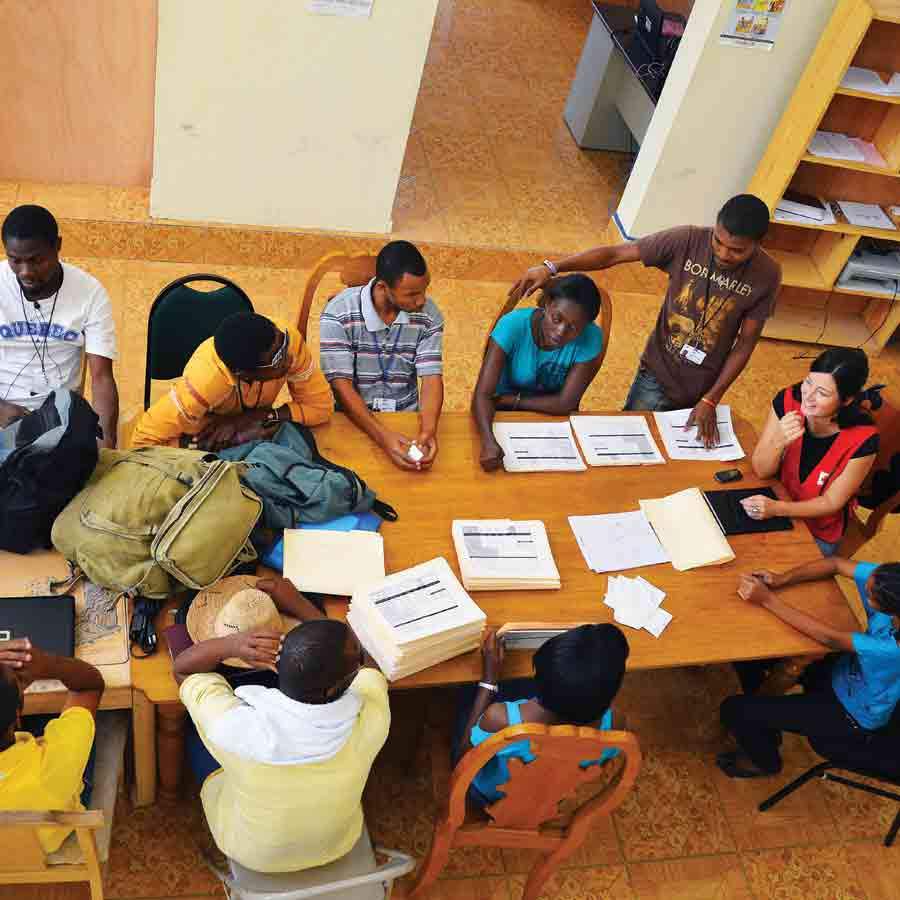 Nearly a year after the massive earthquake in Haiti, challenges for the reconstruction effort continue. James Stairs checks in with the Canadian Red Cross in Jacmel.

There is perhaps no better way to understand the scale of destruction caused by the 2010 Haitian earthquake than to travel the road from the capital, Port-au-Prince, to the coastal city of Jacmel.

The distance is less than 75 kilometres but, nearly a year after the event, the road still takes several hours to travel.

Cars, trucks, buses and motorcycles jam the road, roaring through openings and slamming on noisy brakes as congestion flares seemingly from nowhere.

United Nations officials estimate that there are 19 million cubic metres of rubble in Haiti.

On this road, like most others in Haiti, the debris is shoved to the side so that traffic can pass and life can go on. Behind the piles, kilometre after kilometre of rounded tents and draped tarpaulins mark the cityscape.

In the aftermath of the earthquake, Haitians fled their crumbling and falling homes, setting up camp in any available public space.

There can be no symbol more evident of this flight than the tents that line the median of the highway out of the capitol.

Four chaotic lanes of traffic roar by the makeshift island homes in two directions. Large trucks, passing inches from the tents occasionally blow the flaps open to reveal entire families with tiny children crouching inside. A little farther along, a man fills a two-litre plastic jug with water from an open sewer.

Twenty-nine kilometres from Port au Prince is Leogane, the closest urban centre to the heart of January’s earthquake. Much of the city of 130,000 people still lies in destruction.

Collapsed houses and makeshift camps mark the landscape, as does the omnipresent rubble. Many of the buildings still standing are too dangerous to inhabit. The UN estimates that as many as 90 per cent of the town’s structures were heavily damaged.

In Jacmel itself, a seaside town once known for its colonial architecture and sandy beaches, much of the city is an urban shell. Most of its largest buildings, including the town’s biggest beach-side hotel, are deemed unsafe and have been left abandoned.

At night, children play on the steps of what was once a town square, throwing firecrackers at each other. Excited laughs fill the air. The square is no longer a public meeting place but a tent camp for families displaced by the earthquake.

It is this landscape that Canadian Erin Grinnell and her young Haitian outreach team has been working in for the past seven months.

The scale of her task is enormous. Under the shelter program, the group plans to build 7,500 hurricane and earthquake- resistant homes in Jacmel and Leogane, and has provided funding for 7,500 more in the region to be built by the International Federation of the Red Cross.

Grinnell began the Jacmel operation of the Canadian Red Cross in April 2010, with a skeleton staff, doing much of the work herself. And while her team has since grown, so has the urgency of her work.

The cholera epidemic that hit the island in late 2010 has, so far, spared Jacmel. However, it has increased the urgency of moving people from camps into housing, making an already complicated situation even harder to navigate.

The water source inside many informal camps is dirty canals nearby, and sanitation amongst the nation’s poorest is almost negligible. With these conditions, health officials fear infection from the highly contagious disease could spiral out of control.

The Toronto native is no stranger to challenging scenarios. After completing a volunteer placement in Indonesia following high school, Grinnell knew that she wanted to pursue international development work. A few years later, with two degrees in anthropology under her belt, she launched herself in to a humanitarian career full-time. Grinnell has worked on humanitarian missions in several countries, including challenging assignments in Burma and Afghanistan.

In January, like the rest of the world, she watched the horror in Haiti unfold on her television set and read the harrowing newspaper accounts of the disaster. “With my background, I felt there was something I could offer,” she explains, so she applied to be deployed with the Canadian Red Cross.

Three months later she was on a plane to Haiti, off to oversee the beneficiary selection process for the Jacmel shelter program. “I was actually a little nervous at the time,” she laughs.

“There had been so much in the news. I knew that the level of destruction was so widespread.”

As the relief effort gathered momentum, her responsibilities have grown. Today she oversees a group of 20 young workers, drawn from the ranks of the Haitian Red Cross.

Each day, the team, who range in age from 22 to 30, fan out within the city of Jacmel and the surrounding countryside, meeting with people whose homes were destroyed.

During the past four months, the team has met with more than 7,000 families. It is the information they gather that the CRC uses to assess who gets on a waiting list for a new house.

Grinnell explains, “Basically it comes down to whether someone’s house is completely destroyed or damaged beyond repair. If so, they are selected to receive a CRC shelter. Their vulnerability simply helps us to prioritize who will receive a shelter first.”

In a country where millions of people lost everything, land deeds are a rarity. For those who own land, proving it has become problematic.

Trying to determine who is in most need is not an easy process. However, Grinnell explains, it is fundamental to the principles for which the Red Cross stands. It is also important for the community’s support for the reconstruction effort: conflict can arise when one person gets approved for a new house before the neighbours.

“Single mothers make up a large portion of those selected to receive a shelter,” Grinnell explains. “While they may have many of the same challenges that the whole community faces—lack of employment, a large number of young children, damage or complete destruction of their homes—they have the added challenge of being the sole adult trying to provide for their children.”

Throughout the countryside, dozens of new shelters are popping up.

The small houses, assembled with new plywood, a wood frame and a tin roof, stand out in the informal camps that dot the region. They have been specially designed for Haiti’s conditions, and can be easily relocated in the event of a land dispute or another emergency.

Despite recent progress, with several urban displacement camps receiving new shelters, there have been serious challenges getting the project operating at full-steam.

In a country where millions of people lost everything, land deeds are a rarity. For those who own land, proving it has become problematic; according to the United Nations, less than 5 per cent of Haiti’s land is now officially accounted for in public records.

In the effort to build new homes for Haiti’s estimated 1.5 million survivors, aid agencies must determine who owns each piece of land before they can even begin work.

“[Land ownership] is one of the bigger challenges we’re faced with,” Grinnell says. “Of the families we are helping, half are renting their properties so we have to go through a process where we meet with the land owner and get authorization to build on the land.

“We have to make sure that [the new house] isn’t another opportunity for people to be exploited; that rents aren’t increased or that, once the shelter is built, they aren’t pushed off the land. It can be a lengthy process but it protects the people who need the home.”

“It’s difficult sometimes to move forward,” she explains. “There have been so many stops and starts since I arrived. We’ve been on stand-by a couple of times because of things like gas shortages or not being able to access materials [to build the shelters]. At one point our cars got stuck at customs for a while which slowed the process down.

Local governments have also been slow to recover their administrative powers which has, at times, slowed the process.

“It can be frustrating when you don’t see [immediate] progress but there are definitely several upsides to working here.”

Seeing a shelter handed over to a family in need is one of the positives.

Like her neighbours, Despinoza fled when the small concrete house she and her family lived in collapsed. Until recently, she lived in the tent city nearby.

“I had nowhere to go,” she says, standing in front of the newly finished house. “Living in a tent is not an easy life.”

Another positive for Grinnell is working with her Haitian colleagues. “I love my team,” she laughs. “They’re the front lines of the Canadian Red Cross. They’re out there in the community talking to people in need but also explaining the rationale behind our programs.”

Junior Printemps, 28, is a member of the community mobilization team. He was studying philosophy at university in Port au Prince before the country fell in to chaos.

“My school was destroyed and so was the house I was staying in,” he recounts. Several classmates died in the collapse of the university buildings.

Printemps returned home to Jacmel to help with the reconstruction effort. He had been a Haitian Red Cross volunteer from the age of 13 and parlayed the experience in to a job with the organization. In May, he joined Grinnell’s team.

The world is watching. There are a lot of expectations.

“In January, everything changed [for Haiti],” Printemps explains. “People were poor before, but [after the earthquake] they were living under plastic sheeting [supplied by humanitarian groups]. It was all some of them owned.”

For Grinnell, the challenge is to move things forward as quickly as possible and get people in to new shelters as soon as she can. The team is feeling the pressure, and not just because the local needs are so great. “The world is watching. There are a lot of expectations.”

But new housing is only part of the solution for Haiti, she adds.

“From what I’ve seen, one of the biggest challenges here is the lack of opportunity for people to make a living. Eighty percent of people are living on less than a dollar a day. Without a basic income, people can’t access the services like the schooling or health care that they need to move forward.”

It is an issue that will need even more attention from both the Haitian people and the international community as the reconstruction effort moves forward, she argues.

Despite the occasionally trying work environment in Haiti, she says, the country is very close to her heart.