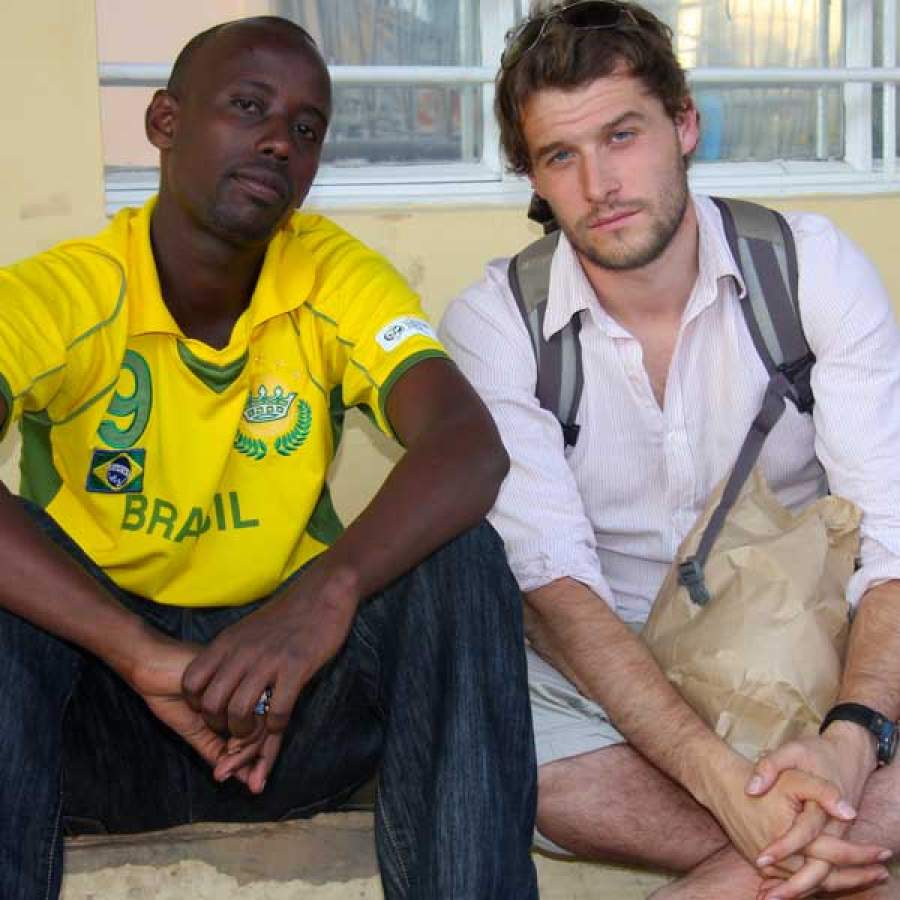 A comedy of errors teaches Canadian journalists about dedication.

I’m sprinting down a dark street, empty but for a handful of illegal money changers leaning against the closed shops of downtown Kigali. We’re live to air in three minutes; I’m three blocks away, panting and panicking. My flip-flop catches a curb and I stumble, nearly tossing the loose papers clutched in my hand.

“Slow down! Slow down!” mocks a money changer. His colleagues laugh from the shadows.

I hit the stairwell in stride. There’s no light—I climb by memory. Jumping two steps at a time, around and around, third floor, fourth floor, fifth floor. City Radio.

One minute to air. The scripts, printed at an Internet café just minutes ago, are pried from my clenched hands. Sit down, shuffle, breathe—three . . . two . . . one . . .

This was the scene almost every Saturday night for the two months I was host and producer of a travel show in Rwanda. It was part of a journalism exchange and training programme called the Rwanda Initiative. My colleague, Pawan Deol, and I worked at City Radio with a small staff of producers, DJs and reporters, almost all of whom were under the age of 30.

Nothing in the office functioned as it should. Chairs and desks were falling apart. There were four working computers: two were used for live radio production, two for research, writing, audio editing, Facebook and a video game that involved shooting bubbles with a laser gun. The one printer was locked in the office of a man I’d rarely see—hence, the Saturday night sprints.

For our show, Iwacu Heza (Our Beautiful Home), Pawan and I travelled across Rwanda each week looking for stories with our producer, Alex Ndahiro. We climbed volcanoes in the north to meet the famous mountain gorillas. We visited a small village and watched Rwandan cinema on an inflatable outdoor screen. We travelled to schools in Bugesera, meeting students of sustainable agriculture. These are the people who are doing their part to put Rwanda on the map—not as a tale of past horrors, but as a land of possibility, an example for the rest of us.

During our shows Alex held things together with unwavering calm. Pawan and I squinted our way through our scripts by the glow of a lamp. Often our documentaries stopped working halfway through. Dead air. Live to Rwanda.

It was a humbling experience. We came to Rwanda with a certain sense of North American superiority. After two months of working in conditions that seemed impossible, Pawan and I learned something about dedication. We met young leaders working with what they had to do something they truly love, even though many had not been paid in months.

At the end of our show, generally 10 minutes short or long of the scheduled time, Pawan and I would stammer out something until our jungle beat extro kicked in.

“Murakoze, thanks for listening,” one of us would say. “Join us again next week on Iwacu Heza—our beautiful home.”

The Rwanda Initiative (www.rwandainitiative.ca/blog/?cat=6) is a partnership between journalism schools at Ottawa’s Carleton University and the National University of Rwanda. Dan Robson’s project blog includes some episodes from the radio programme.